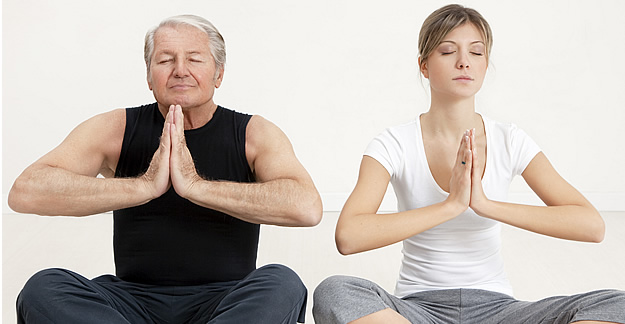 As yoga continues to rise in popularity, it may help reduce the use of medications for some common medical conditions.

A few years ago, a man in his early 50s with benign prostate enlargement was suffering greatly and losing sleep. Keen to find relief from symptoms that persisted in spite of taking prescription medication, he decided to try yoga. He worked one-on-one with a certified yoga therapist three times a week and after a few months his symptoms subsided. “We worked together for a few years. Ultimately, he was able to get relief and get completely off his medication,” says Erinn Cayehal Chang, yoga instructor and consultant in Scarsdale, New York.

More people are searching for complementary approaches to traditional medicine for relief from a variety of medical conditions. Yoga continues to rise in popularity because it’s a low-impact activity that improves overall physical fitness, strength and flexibility. Yoga can be adapted to a wide variety of fitness levels and offers a low risk of serious injury or side effects when practiced carefully under the guidance of an experienced, certified instructor.

Yoga can help reduce chronic pain, low back pain, stress, anxiety, depression and insomnia, according to the National Center for Complementary and Integrative Health (NCCIH) at the National Institutes of Health. Yoga can also help lower heart rate and blood pressure.  Recent research and input from health experts suggest that yoga can help reduce the use of medications for some common medical conditions.

Low back pain. Some research has found that yoga provides a modest improvement for those who suffer from chronic low back pain. In a study published in JAMA Internal Medicine researchers  divided 228 participants with chronic low back pain into three treatment groups — yoga classes, stretching classes and a self-help education group that received The Back Pain Helpbook. Over a period of 12 and 26 weeks, both the yoga and stretching groups showed significantly improved chronic back pain compared to the self-help group.

At the beginning of the study, 59% of participants were taking pain medications for their low back pain, predominantly NSAIDs (non-steroidal anti-inflammatory drugs such as aspirin or ibuprofen). But interestingly, twice as many participants in the yoga and stretching groups, about 40%, reported decreasing their medication compared to only 20% in the self-help group at both 12 and 26 weeks.

Effective lower back pain relief may not require multiple weekly sessions though. In a novel small study published in Evidence-Based and Complementary and Alternative Medicine, researchers at Boston Medical Center and the University of Washington compared results for once-weekly and twice-weekly yoga classes among those in lower-income minorities with chronic low back pain. After 12 weeks back-related function and pain had improved for both groups, but surprisingly, there was no difference between the once-weekly group and the twice-weekly group.

Both groups showed a significant reduction in pain medication use after 6 weeks — 27% for the once-weekly group and 35% for the twice-weekly group. “We found on average, over the course of the day, there were one and a half to two less pain pills taken by the patients doing yoga,” says Robert Saper MD, MPH, lead author of the study, professor of family medicine at Boston University School of Medicine and director of integrative medicine, Boston Medical Center.

Hypertension. As part of a total lifestyle approach, yoga can help manage hypertension. In a 2019 study published in the Mayo Clinic Proceedings researchers at the University of Connecticut evaluated the results of 49 controlled trials of different yoga interventions in adults with high blood pressure. There were more than 3,500 study participants, all middle aged and overweight. Those who practiced yoga, along with breathing techniques and meditation or mental relaxation, three times per week experienced the greatest blood pressure reductions compared to those who did none of these interventions.

A study in Israel found that a comprehensive program that included yoga as well as a rice diet and walks, together with relaxation and stress management, led to a reduction in the use of blood pressure medications for 70.7% of participants. Those in the comparison group who followed the Dietary Approaches to Stop Hypertension diet (DASH diet) plus walks only saw a 32.7% reduction in their use of medications. Notably, after six months, most participants were holding steady with their medication status.

Chang and Dr. Saper have both worked with clients who have been able to wean themselves completely off blood pressure medications after using yoga as part of a total treatment plan. However, they both caution that it’s important to consult with your health care provider and if appropriate, to wean off gradually under careful supervision. “Yoga can have a significant impact, because you start to eat differently, you exercise more and you sleep better. When those changes get established over a period of several months, that’s when people may be able to reduce their blood pressure medication,” says Chang. She notes that many doctors now recommend yoga to patients with prehypertension, to see if they can get their blood pressure under control before they resort to taking medication.

Depression and other mental disorders. Researchers at the Duke Institute for Brain Sciences at Duke University reviewed more than 100 studies and found 16 high-quality studies that looked at the effects of yoga on major psychiatric disorders, including depression, schizophrenia, ADHD and sleep disorders. They found promising evidence that yoga can have positive effects on mild depression and sleep complaints, even in the absence of drug treatments, and that yoga can help improve symptoms for schizophrenia and ADHD in patients on medication.

An analysis of 17 studies by researchers at Boston University concluded that Hatha yoga, which focuses on physical poses, is a potential method for treating anxiety. The studies included about 500 people with varying levels of anxiety and ranged in length from four to 20 weeks with one to five yoga sessions per week. People with higher levels of anxiety at the beginning of the study period, and those who participated in more weekly yoga sessions benefited the most compared to non-active control groups.

In a 2019 report from East Carolina University Brody School of Medicine, researchers in the department of psychiatry and behavioral medicine said that based on available research, yoga is a treatment option for depression and anxiety disorders, particularly panic disorder. The authors of the report note that yoga can be used alone for depression but would get better results as an adjunctive treatment with cognitive behavior therapy, selective serotonin reuptake inhibitors, or other antianxiety medications for depression and anxiety.

More studies, especially larger controlled trials over longer periods of time, are required to explore the full promise of yoga for improving mental health disorders. Author and yoga teacher Amy Weintraub outlines in her book, Yoga for Depression, how within a year of beginning her yoga practice in 1989, she was able to gradually go completely off medication for chronic depression over several weeks and has been depression-free ever since.

How does yoga work for common medical conditions?

Scientists are trying to find out how yoga works for common medical conditions. Yoga combines physical poses, pranayama breathing and meditative components, all of which play important roles in improving physical and mental health. Compared to medication, yoga may more directly address the underlying causes of some medical conditions. The physical aspect helps maintain muscle condition, posture and alignment, which can help ease some types of pain. The pranayama component reduces stress: “If you do slow, deep breathing, it’s impossible to be stressed, because you are working on increasing your parasympathetic nervous system and decreasing your sympathetic nervous system output,” says M. Catherine Bushnell, PhD, co-author of an important study on yoga’s impact on the brain and senior investigator in the pain and integrative neuroscience branch at the NCCIH.

In their groundbreaking study, published in the journal Cerebral Cortex, Dr. Bushnell and research colleagues explored how pain affects the brain among those who practice yoga regularly and those who do not. “Because yoga doesn’t just work on the musculoskeletal system, but also involves attention and reduces stress, and these factors impact on pain, we wanted to see if yoga changed the brain,” says Chantal Villemure, PhD, investigator with Bushnell at the NCCIH and lead author of the study.

To measure pain tolerance, in one of the experiments the researchers timed how long yogis and non-yogis could keep their hands in freezing cold water. Yogis were able to tolerate pain twice as long as non-yogis. Through brain imaging, they found that “there were a number of parts of the brain that were larger in yogis, and there was one area, the insular cortex, that was specifically related to this increased pain tolerance,” says Dr. Bushnell. The insular cortex, or insula, is located deep in the brain and is the area responsible for coordinating body states with emotional responses, giving rise to conscious thought.

For certain conditions, like low back pain, hypertension and some mental disorders, yoga holds promise as a complementary alternative therapy that may help people reduce their reliance on medications. Researchers are currently investigating how yoga might help in the future with diabetes risk, HIV, immune function, arthritis, menopause, multiple sclerosis, PTSD and smoking cessation.