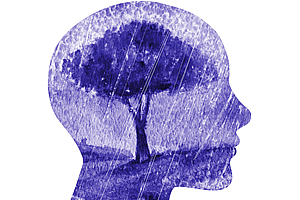 “Over the past two decades, the use of antidepressants has skyrocketed. One in 10 Americans now takes an antidepressant medication;” wrote Roni Caryn Rabin in a New York Times article that appeared on August 12, 2013, titled, “The Glut of Antidepressants. “Among women in their 40s and 50s, the figure is one in four,” notes the article.

There are dozens of antidepressants available to be prescribed in the U.S., with more becoming available every day. Dozens of drugs to quell the sadness and hopelessness that is depression. But which is the right one?

I began my journey with antidepressants in the winter of 2000 with Zoloft. The medication did what it was supposed to — got me out of bed and to my college classes and part-time job. When my depression lifted for a substantial time, I went off Zoloft.

Back then I was diagnosed as suffering from major depression only to find out years later that my actual diagnosis is bipolar 1, and that depression was just part of my illness — the other part being mania. In addition to bipolar disorder I live with obsessive compulsive disorder and anxiety disorder. Each of these mental illnesses is defined in the Diagnostic and Statistical Manual of Mental Disorders, Fifth Edition, also known as the DSM-5. Your psychiatrist should be well-versed with this manual and will use its guidelines to define not only your mental illness, but to plan a course of treatment. This is notable because although each diagnosis is quite different, antidepressants can be used to treat all the above illnesses, often in conjunction with other medications and therapy.

I have tried nearly a dozen antidepressants over the years: Zoloft, Cymbalta, Effexor XR, Lexapro, Prestiq, Prozac, Seroquel XR and Zyprexa. Each has its advantages, and each — its drawbacks. No two antidepressants are the same. Some may have a little more of this compound, while another may have a little less. It is what keeps pharmaceutical companies in business, coming up with new, effective treatments.

Today I take Prozac, which except for zapping my sex drive, works just fine. We had tried Zoloft again, but it wasn’t helping with my anxiety. Recently I was put on Effexor XR to further treat my anxiety. As MedlinPlus explains, Venlafaxine, the generic name of the drug, is used to treat depression and also “generalized anxiety disorder (GAD; excessive worrying that is difficult to control), social anxiety disorder (extreme fear of interacting with others or performing in front of others that interferes with normal life), and panic disorder (sudden, unexpected attacks of extreme fear and worry about these attacks).” Venlafaxine is a serotonin-norepinephrine reuptake inhibitor (SNRI). It works by helping to restore the balance of certain natural substances (serotonin and norepinephrine) in the brain. {See MedShadow’s Anti-anxiety Meds: Options, Side Effects and Alternatives}

Effexor XR and I were a mess. It disrupted my digestive system causing me to have chronic constipation. I tried taking fiber tablets, drinking more water, taking laxatives. Nothing really worked. I would go days between bowel movements and was in a constant state of discomfort. Though that symptom was invisible, what could be seen was the constant shaking in my hands. The palsy was so severe that I had trouble writing; even signing my name to PICK UP the Effexor XR at the pharmacy was nearly impossible. I felt like an elderly woman at the ripe old age of 33. My psychiatrist prescribed a dosage change to eventually wean me off of the medication.

Instant Side Effects – at Target

The first day I tried Pristiq, also an SNRI, I experienced one of its common side effects: sweating. My boyfriend and I were doing Christmas shopping early in December and right there, in the middle of Target, I broke out in a full sweat. I kept wiping the moisture off my upper lip, wiping my hairline. When we left the store, my boyfriend put on the A/C in the truck. The sweating continued in hot flashes for the first couple of weeks.

The more concerning side effect started shortly after the sweating episodes stopped. There would be these bursts of energy and joy that would come out of nowhere. I would talk a mile a minute, often interrupting those I was with. On the highway I wanted to go over 100 mph. I also craved a cigarette, something I only want when manic. All these were signs that mania was around the corner. I have rapid-cycling bipolar disorder so it is not uncommon for my episodes to last a few hours and these did just that, by morning I was fine. Each time this happened I asked my boyfriend to keep an eye on me. Mania gets me in trouble.

It was in talking to my therapist about these “Mini Manic Moments” that we realized something was up and that I should discuss it with my psychiatrist in the meeting immediately following ours. When I told my psychiatrist that this had happened 4 times he told me that we had to stop the treatment of Pristiq immediately because I could go into a full-blown manic episode. He told me he has seen it happen. Neither of us wanted that.

In addition to the antidepressants, antipsychotics and sedatives I take to live my life, I also attend cognitive behavioral therapy every other week — more often if necessary. My life cannot be cured by talk therapy alone. I need powerful drugs, which come along with powerful side effects, to function, but therapy is a pivotal part of my wellness.

Bottom line? Antidepressants affect the chemicals in your brain and no two brains are alike. What hasn’t worked for me may very well be your miracle drug. It is all trial and error until you find the thing that works. When you get a new medication, read the possible side effects listed on the information given with the drug. Be aware. Don’t be afraid to tell you doctor about your side effects to determine whether or not it is worth continuing to take the medication. There are at least 43 antidepressants; one of them is bound to work for you.

Some people find lifestyle changes — like cutting back on alcohol or adding a regular exercise routine — along with alternative therapies like yoga or neurofeedback helpful in treating depression and anxiety so they are worth researching as well.