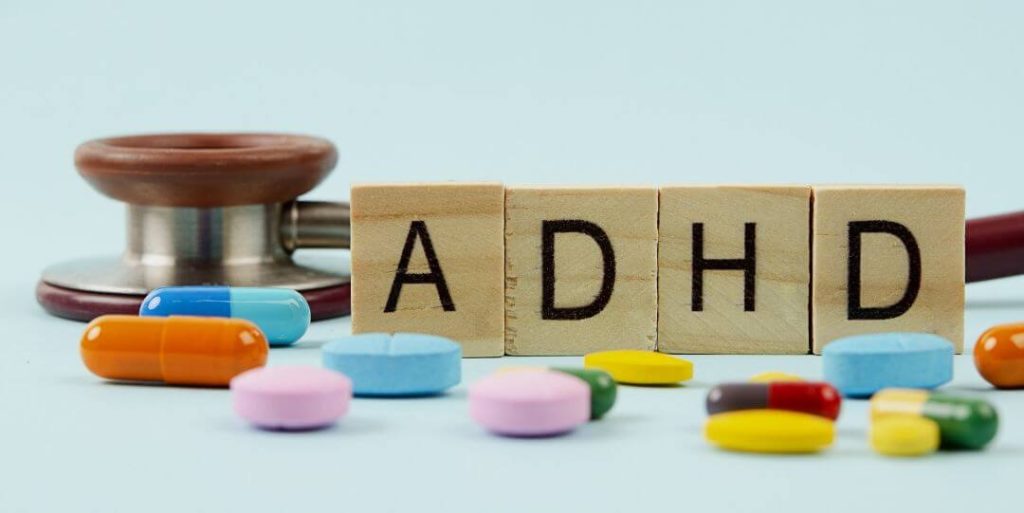 ADHD (Attention-deficit/hyperactivity disorder) is one of the most common mental health disorders in the United States. As of 2016, 9.4% of kids aged two to 17 years had been diagnosed with ADHD, and an estimated 4.4% of U.S. adults aged 18 to 44 years have also been diagnosed. This translates into millions of people who take ADHD medications. Behavioral therapy is recommended as first line treatment for children six and under. From 7 and older medicines can be used also.

ADHD has no known cause, but studies have linked higher rates of ADHD to using Tylenol (acetaminophen) in pregnancy, using anti-epileptic drug Depakote/Depakene in pregnancy,  or being a grandchild of women exposed to the drug DES in pregnancy. A more recent study, published in JAMA, found that adolescents who were exposed to endocrine-disrupting chemicals, specifically phthalates, had, on average, a 34% increased risk of having ADHD.

With such a rise in the number of children and adults being diagnosed with ADHD, it’s helpful to get a second opinion. Read Three Situations Where a Child May be Overdiagnosed wtih ADHD. It applies to adults too.

Behavioral therapy is the first line treatment along with medicines. Here’s what you need to know about these drugs to help you make empowered decisions.

The most commonly prescribed non-stimulants for ADHD are atomoxetine (Strattera), clonidine (Catapres), guanfacine (Intuniv) and bupropion (Wellbutrin), though bupropion is not FDA approved as an ADHD treatment.

It’s unclear exactly how they work, but stimulants seem to increase levels of the neurotransmitter dopamine, while non-stimulants boost the neurotransmitter norepinephrine, both of which help different areas of the brain communicate more effectively. This, in turn, improves alertness, impulsiveness, attention and hyperactivity.

It’s important to know that we could find no studies on the long-term effects of ADHD medicines on children, teens in puberty or adults.

The most common side effects of taking any of the stimulants are dry mouth, difficulty sleeping, irritability, decreased appetite, weight loss, headaches, tics, feeling jittery and a racing heartbeat.

The non-stimulant Strattera can cause the same effects, as well as constipation, sexual difficulties, dizziness, nausea, fatigue and sweating. Catapres and Intuniv can both cause sleepiness during the day. Some or all of these side effects may go away after you’ve been on the medication for a while, but if they don’t or they’re severe, your doctor can try changing your dose, switching you between long-acting and immediate-release versions of the drug or trying a different kind of medication.

Several studies have indicated that ADHD stimulant meds may increase the risk of psychotic disorders. A study in Pediatrics January 2015 issue concluded that if one or both of the parents have major depressive disorder, bipolar disorder or schizophrenia, the child given ADHD meds has a much higher risk for psychotic symptoms than kids on the meds but without the family history.

Diagnosed at the age of 20, Collin Lindhorst, 39, has tried Adderall, Ritalin, Ritalin XR, generic Ritalin (methylphenidate) and Vyvanse. Currently, he’s taking Vyvanse and Wellbutrin together. He says that Adderall “made me feel like I had 10 cups of coffee in one sitting and gave me headaches,” and that Ritalin put him on edge and made him feel snippy and grumpy. Though all of the medications, except Adderall, helped him feel more motivated, energized and focused, “Vyvanse has been the best,” Lindhorst says. “Most of the other medications felt like they kicked in, worked for a short while and then I came down quickly.” Like others with ADHD, Lindhorst has been on and off ADHD medications over the years “because I feel like I have a handle on things, but after two to six months, I fall back into the same pattern of low motivation, depression and falling behind on tasks. What I know now at 39 is that I can’t function properly or efficiently without my medications. They are a need.”

Andy V., 38, was diagnosed with ADHD eight years ago. At first, he was on Adderall XR for a few months, but he says even just being on that initial low dose made him feel jumpy and excitable. “I recall multiple instances of hopping up from my desk and jogging through my office to catch co-workers between calls for impromptu face-to-face meetings,” he says. “I believe it was also the cause of me not being able to climax during sexual activity with my spouse.” However, he has been on increasing doses of Vyvanse for the past seven and a half years and says he has no side effects. Though he had side effects with Adderall, he says,“both medications worked extremely well. They allowed me to focus on specific tasks without being sidetracked by unimportant or unnecessary thoughts and actions.”

Anita Drink’s* son, 15, was diagnosed with ADHD four years ago in sixth grade, and he’s been on generic Concerta, a long-acting version of methylphenidate, ever since. He’s also tried, but didn’t like, intermediate-acting methylphenidate to get him through shorter times, like half days of school, and Intuniv for his issues with falling and staying asleep. “The first night [on Concerta] was horrible,” Drink says. Not only was he unable to fall asleep for hours, his arms and legs were jerking and he was shaking uncontrollably. “Fortunately, the second night was better, and that never happened again,” says Drink. Her son’s main side effect is a lack of appetite, which has prompted growth monitoring via regular weight checks and X-rays of the growth plate in his wrist. Because of his sleep problems, he’s extremely tired in the morning and before starting Concerta, he often fell asleep at school. Concerta keeps him awake and “really helps him pay attention in school. If he doesn’t take his medication, he finds it difficult to focus and often doesn’t remember what happened in class.”

Both stimulants and non-stimulants may interact with other medications, so let your doctor or pharmacist know about all other over-the-counter or prescription drugs you’re taking, as well as herbal remedies, supplements and vitamins.

Neurobiologist David Anderson, California Institute of Technology, has an alternative view of using medicines to manage ADHD. Dr. Anderson notes that pharmaceutical companies should be pressured to “perform and support studies of the long-term consequences of treating pre-adolescent and adolescent children with these drugs over periods of years, and to look at what happens as these individuals are taken off the drugs after periods of time.” For more, see his TEDxCaltech talk, Your Brain is More than a Bag of Chemicals.

For children with ADHD younger than six years of age, the American Academy of Pediatrics (AAP) recommends parent training in behavior management as the first line of treatment, before medication is tried.

Medications affect people differently, so what worked for one person may not work as well for another. With ADHD medications, it’s important to be patient until your doctor can find the best kind for you, and this can take some trial and error. It should give you the most effective relief with the fewest side effects.

Stimulants do have the potential to be habit-forming, but taking them as prescribed for ADHD doesn’t cause dependence or abuse. A 2003 study found that untreated ADHD leads to more substance abuse disorders than treated ADHD. Still, especially if your kids are taking these drugs, make sure they only take them as prescribed and that they understand the dangers of both taking too much and sharing their medicine.

People with heart conditions shouldn’t take stimulants because they can cause sudden death in children and teens, and sudden death, heart attack or stroke in adults.

For six and under: The American Academy of Pediatrics (AAP) recommends parent training in behavior management as the first line of treatment for children under six years old, before medication is tried. teaches kids new behaviors that help them cope with school, relationships, disorganization and impulsiveness. Parents can also learn effective ways to reinforce these skills. Studies have shown that behavior therapy is just as effective as medication in this age group.

For children six years of age and older: the recommendations include medication and behavior therapy together — parent training in behavior management for children up to age 12 and other types of behavior therapy and training for adolescents.  Schools can be part of the treatment as well. AAP recommendations also include adding behavioral classroom intervention and school supports. Read School Success for ADHD Students.

For all ages: cognitive-behavioral therapy (CBT) can be a helpful adjunct treatment in learning to cope with relationships and functioning at work or school.

Alternative treatments such as dietary supplements, acupuncture, neurofeedback or yoga can be used instead of or along with behavioral therapy and drugs. See MedShadow’s article: Treating ADHD Without Drugs. According to the National Center for Complementary and Integrative Health, research has shown either no benefit or mixed outcomes regarding using these approaches to treat ADHD. Be sure to talk to your doctor before trying any alternative treatment, even if you’re just planning on adding it to your current treatment. This is especially important when it comes to supplements, as they may create an interaction with ADHD medications.

Adults and teens may find 18 Tips for Mastering Adult ADHD to be helpful.

And don’t forget acceptance. Are there positive attributes to ADHD? There are those who suggest that those with ADHD inherited it from their forebearers who were the “hunters.” The rest of us, presumably, descended from the “gatherers.” No matter, there are careers where the ability to jump from topic to topic, to avoid getting lost in details and to be able to make quick decisions are highly valued.