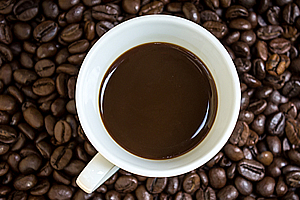 A friend commented the other day, “Drugs are neither good nor bad. They have no ethics.” I was reminded of this as I spent the hours of 2 – 4am last night awake and cursing that after-dinner espresso. Caffeine is so integrated into most Americans’ daily lives it’s easy to forget it’s a drug.

Caffeine is safe and helpful for alertness and energy: 100 mg of caffeine (about one cup of coffee) sharpens nearly all the body’s organs: brain, muscles, etc. It’s a performance enhancer.

200-300 mg of caffeine (2-4 cups of coffee) is considered a safe level for adults. When your body has had enough, or too much, it gives very clear warning signals early on that discourage drinking more coffee: jitteriness, irritability, diarrhea. It’s unlikely, even difficult, to overdose on caffeine when ingested through foods, soda or coffee.

Caffeine is dangerous and can cause cardiac arrhythmias: However… there is always a however… energy drinks have changed the formula. Energy drinks contain as much as 240 mg of caffeine in a 24-ounce single serving. That makes it possible to drink in so much caffeine so quickly that you can blow past the body’s warning signs to go directly to danger. Teens and young adults, the target market for most of the energy drinks, are chugging caffeine without any concept that this legal drug can be lethal.

Each person can tolerate different levels of caffeine, but 500 mg is often noted as too much. A child or teen should have 100mg or less a day. Energy drink companies like Monster Beverage Corp. uses phrases like “radical ‘Juice Monster’ hybrid with explosive flavor and the big bad Monster buzz you know and love!” Red Bull comes in 8.4 ounce servings with 80mg of caffeine, which is the same per ounce amount of caffeeine as is in the Monster Energy drink, but the larger Monster cans encourage a bigger serving size.

Immediate signs of too much caffeine:

Drinking high levels of caffeine for a longer time can set you up for high blood pressure, high blood sugar, and decreased bone density (WebMD)

Caffeine Overdose An official diagnosis can be made when any 5 of the following symptoms are present: restlessness, nervousness, excitement, insomnia, flushed face, diuresis (you keep passing urine), gastrointestinal disturbance (upset stomach, diarrhea), muscle twitching, rambling flow of thought and speech, tachycardia or cardiac arrhythmia, periods of inexhaustibility, or psychomotor agitation.

Signs of caffeine overdose that need medical attention (via Healthline.com):

Fascinating factoids and concerns with coffee, even in low amounts: In healthy adults, caffeine’s half-life is approximately 4.9 hours.Half-life is the time it takes for half of the dose to be eliminated from the body or bloodstream.

In women taking oral contraceptives, half-life is increased to 5–10 hours, and in pregnant women the half-life is roughly 9–11 hours. Caffeine does enter breast milk, so breastfeeding mothers have to be very careful with caffeine.

Some energy drinks claim to be “all natural” with the implication that they are better for you. Those drinks usually add guarano, which is a berry that is filled with caffeine. It’s neither better nor worse than caffeine derived from coffee beans. Your body can’t tell the difference.

Taking echinacea for a cold? It can increase the concentration of caffeine in your blood and increase the symptoms of over-caffeination.

Have asthma and take theophylline? (Or does your kid?) It acts in a similar way as caffeine, so caffeine has a jump start if theophylline is already in your system.

Just a year ago I could drink coffee all day long and after dinner without it affecting my sleep. Those days are gone. I get jittery after 2 cups and my stomach sours during my third cup. I’ve devised a new, 2-pronged strategy: I switched from my oversized 16-ounce mug to an elegantly beautiful 6-ounce china cup and I drink a glass of water between each cup of coffee. Without trying too hard and without inviting a withdrawal headache, I cut my coffee consumption in half. Except last night. Damn that after dinner espresso!