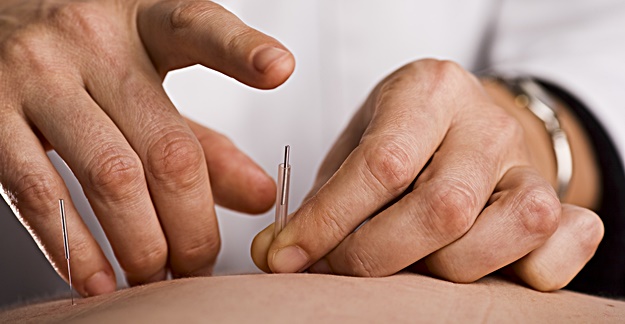 According to New York City-based acupuncturist Noah Rubinstein, DCAM, LAc, “We are learning from science that there are real, physical tissues that not only mirror the same pathways of Chinese energy, but that tissue is incredibly reactive in the places we consider acupuncture points.”

Rubinstein, who serves as chief clinic director of the Yinova Center, says there are three prevailing theories: “The first is called gate theory, which states that nerve stimulation at certain points inhibits the brain’s perception of pain. Another theory is that acupuncture [creates] microtraumas [that stimulate the body to heal injuries]. And lastly, that the microtraumas trigger a histamine response which turns into a cascade of metabolic events. But none of these theories have fully explained what is going on.”

It is also thought that the insertion of needles leads to the release of chemicalssuch as endorphins, norepinephrine and enkephalin that are considered natural painkillers.

While previously viewed as alternative medicine, acupuncture is growing in popularity among conventional practitioners as well. The FDA recently recommended that physicians consider acupuncture for their patients as alternative pain management to opioids, since acupuncture has only minor side effects when practiced by a trained professional. These include redness, minor bruising at the placement points and sometimes pain when needles are placed. While perhaps initially intimidating because of the use of the needles, acupuncture administered by trained and licensed professionals helps treat a number of medical conditions.

Acupuncture assists in the treatment of reproductive health issues, including painful cycles, infertility and menopause. Women experiencing painful cycles have found relief through acupuncture, and while the reason this works is still not known, several studies confirm the efficacy of acupuncture to treat pain during menses.

According to research published in the International Journal of Women’s Health, acupuncture “regulates uterine and ovarian bloodflow,” and by doing so, alleviates pain. Additionally, by stimulating these systems in women experiencing infertility, a healthier uterine environment results, which promotes successful fertilization.

In Rubinstein’s practice, many patients receive acupuncture in conjunction with assisted reproductive technology. “Our patients are often already working with reproductive endocrinologists, and we interface with their Western doctors,” he says.

Migraine headaches can be debilitating, often disrupting the sufferer’s ability to fulfill obligations, complete work or even have an enjoyable day. According to a study conducted by the Canadian Medical Association Journal, acupuncture helps migraine sufferers in the long term, reducing the intensity and frequency of migraine headaches.

The study was conducted by giving one group of migraine sufferers actual acupuncture treatments while a second group received sham treatments. None of the participants knew which treatment they were receiving, and although all participants felt the treatments had helped, only those who had received the authentic acupuncture enjoyed long-term benefits.

A 2012 study published in JAMA Internal Medicine involving 29 studies and almost 18,000 patients also found that acupuncture was more effective than placebo for four different kinds of chronic pain, including headaches.

Between 60 and 70 million Americans suffer from digestive diseases. Acid reflux, Crohn’s disease, irritable bowel disease and ulcerative colitis are among the many gastrointestinal disorders that interrupt daily life, cause pain, embarrassment and even debilitating and life-threatening symptoms.

Medications are often costly, have side effects and address the symptoms and not the cause of gastrointestinal disorders. In a study conducted by the World Journal of Gastroenterology, similar results to the migraine study were found: While sham acupuncture did show some effectiveness, perhaps due to the power of suggestion, actual acupuncture was statistically more effective in treating gastrointestinal disorders.

A meta-analysis published in the same journal, which focused on six placebo-controlled trials for irritable bowel syndrome that enrolled about 700 people, found acupuncture was superior to the sham treatment in providing relief.

Anxiety and depression affect tens of millions of Americans at any given time. The Anxiety and Depression Association of America (https://adaa.org/finding-help/treatment/complementary-alternative-treatment )(ADAA) states, “Evidence for the use of acupuncture…. to treat anxiety disorders is becoming stronger.”

The ADAA strongly encourages working with your doctor and not stopping any medications without their approval, but does suggest that complementary and integrative medicines such as acupuncture are helpful in treating depression and anxiety. Rubinstein, who treats people with depression in his acupuncture practice, also stresses the need for working together with a patient’s entire health team.

“We run the risk of a reactive healthcare model if we only treat individual symptoms. We’ll never get to the root cause,” he says. “We are very focused on giving people in-depth, personal attention. We take a deep dive into their health history before making a treatment plan.”

During treatments provided by a licensed acupuncturist, patients may also receive massage and aromatherapy, enhancing the efficacy of treatment. If you think that you might benefit from acupuncture, speak to your medical provider about treatment and referral options.