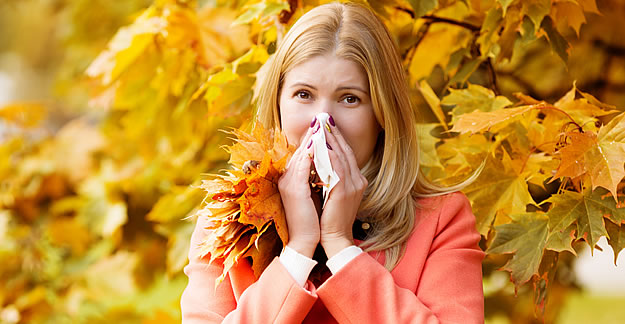 Pollen, ragweed, mold spores…. Autumn has its own set of allergens. You may want to test some non-medicine methods to see if they will work for you.

Got itchy eyes and nose, sneezing fits and the sniffles? How could it be allergy season, again!?

While most people think of springtime when they think of seasonal allergies, fall can be another trying time. Allergic reactions caused by substances like dust mites, pollen or pet dander are technically called allergic rhinitis or hay fever. A reported 20 million adults and 6 million children had hay fever in 2015, according to the CDC (Centers for Disease Control and Prevention). A significant portion of those folks suffer from seasonal allergies due to pollen, most commonly from trees, grass, weeds and mold.

When exposed to these irritants, these sufferers experience symptoms like a stuffy or runny nose, sneezing, phlegm in the throat and itchy eyes. If this describes you, your first impulse might be to stock up on over-the-counter or prescription allergy meds like antihistamines, nasal steroid sprays and decongestants. Before you do, though, try the tips below from Zhanxiang Wang, MD (China), PhD, LAc, assistant dean of the Acupuncture and Oriental Medicine program at the National University of Health Sciences in Lombard, IL.

1 Keep the Allergens Away

“It may sound obvious, but it’s also easily ignored –- avoiding the allergens is the number one measure,” says Dr. Wang. Since airborne pollen is the top seasonal allergen, the following tweaks to your surroundings can go a long way toward prevention during those key times of year.

Christine Chen, a student in Roswell, GA, used to take over-the-counter allergy medicine religiously until she got serious about taking these kinds of preventive measures. Now she rarely needs medication to keep her symptoms to a minimum.

Rinse with saline before symptoms strike. “Like HEPA filters in air conditioners, the nose is like a filtration system to the body,” according to Dr. Wang. A nasal irrigation device like a neti pot contains a sterile saline solution to flush allergens from your nasal passages, and several studies support their benefit. “Some people may be scared about pouring water into the nose, but saline doesn’t have any downsides or negative side effects.”

One critical warning: Do not use regular tap water, as it may contain organisms that are generally safe to swallow but could cause infection if delivered to your nasal passages. Either boil the tap water for 3 to 5 minutes and let it cool to room temperature before using, or buy water labeled “distilled” or “sterile.”

3 Let Food Be Your Medicine

Allergies cause inflammation, which can be reduced by eating certain foods often. Omega-3 fatty acids are one example. Research shows that people with asthma caused by allergies who regularly ate foods rich in omega-3s were less likely to have symptoms than those who did not eat these foods. Good sources are cold-water fish, walnuts, flaxseed oil, grass-fed eggs and meat.

Other inflammation-lowering foods include onions, grapes and tomatoes, which contain a chemical called quercetin, a natural anti-inflammatory that can also block the effects of histamines during allergic reactions. Green tea is another “natural antihistamine that’s powerful enough to actually interfere with allergy skin tests,” says Dr. Wang. And you can amp up the flavor in your meals while fighting allergies by sprinkling on turmeric, a spice commonly used in Indian cuisine. It contains curcumin, which may reduce allergy symptoms by acting as a decongestant. “With any herb, check with your doctor before using, especially if you have a liver problem, are pregnant or nursing, or are taking hormonal contraceptives,” Dr. Wang warns.

Enrique Morez of Los Angeles has found that since he started eating more produce and spices (especially turmeric, black pepper and cayenne pepper) in general, his allergies have plagued him far less often.

Ancient Chinese procedures, including acupuncture, have been used to treat a number of allergy symptoms, and studies back up its benefits. “Experts don’t know for sure why acupuncture helps, but they believe it may curb inflammatory immune-system substances involved in allergic reactions,” Dr. Wang explains. Acupuncture uses hair-thin needles that are placed just under the skin, but if needles aren’t your thing, you could try moxibustion, in which an herb called mugwort is burned very close to the skin to treat imbalances, or cupping, which involves suction on specific points on the body with glass, plastic or bamboo cups. Su Robotti, MedShadow founder and blogger, has tried both. “The needles are just a slight prick, they don’t hurt. The cupping left 4-inch round red marks on my back. I couldn’t see them, but my husband was shocked! They took a couple of days to go away. So make sure you aren’t planning to go to the beach or wear a backless dress in the next few days.”

“If you are considering a complementary health approach for seasonal allergies, talk to your health care provider about the best ways to manage your symptoms,” advises Patricia A.Takach, MD, FAAAAI, associate professor and acting chief of the Section of Allergy and Immunology at the Perelman School of Medicine at the University of Pennsylvania. But keep in mind that these remedies do not require FDA approval, and “many may lack rigorous scientific evaluation, which makes it difficult for clinicians to recommend them with confidence.”

Dr. Takach recommends that consumers consult information provided by the National Center for Complementary and Alternative Medicine (NCCAM), which aims to evaluate the usefulness and safety of natural health interventions. Another helpful resource is the Natural Medicines Comprehensive Database, which requires a monthly or annual subscription and offers reviews on the effectiveness of these treatments as well as potential interactions with other drugs.

“If symptoms persist with no improvement in frequency and continued impairment of quality of life, other measures such as pharmaceutical interventions should be considered,” she notes.