A ‘Viagra’ For Love? 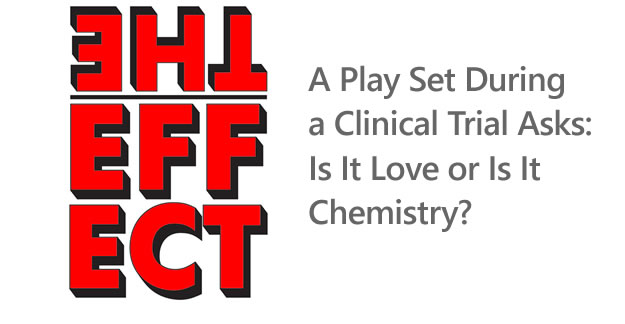 Attraction, sexual desire, love — we call it chemistry. But can we trust the feelings if they’re sparked by an actual chemical, in pill form? Or is love welcome no matter the cause?

Exploring those (and so many more) issues is “The Effect,” a new play by Lucy Prebble running Off Broadway in NYC for a short time. In it 2 strangers, Connie and Tristan, meet at a clinical trial for a new antidepressant drug. Both are healthy and don’t have depression; it’s a Phase 1 trial, which means it is testing a potential drug’s safety on humans, not it’s effectiveness.

MedShadow published an article, Should You Join a Clinical Trial? There are generally 2 reasons for joining a trial: Healthy volunteers want to make money and sick patients hope to improve or save their own lives in a late-stage drug trial. Both advance medical knowledge and help others by being in the trial. Regardless of the reasons participants sign up for trials, they face risks as well as benefits.

In “The Effect,” the drug trial requires the couple to live in the clinic for a month. Tristan is immediately flirty, while Connie, in a relationship with another man, is standoffish. But their constant contact overcomes her qualms and they quickly fall wildly in love… or do they?

Both are taking the antidepressant being tested (or is one of them on a placebo?), which increases dopamine levels. Is that what’s making them feel love? And if so, is that real love? Connie distrusts such a love and fears for what happens when they stop taking the drug. Tristan insists on living in the moment, and overcomes her objections in waves of lust

The playwright doesn’t stop there, but pursues ever-widening circles of conflicts and ethical quandaries: The doctor overseeing the trial suffers from depression herself, but believes depression can’t be fixed by a drug. Her boss (who shared a one-night stand with the doctor years before!) is a shill for a pharmaceutical company but sincerely believes the brain is a soup of chemicals that can be fine-tuned or re-balanced by introducing another chemical. Both the doctor and her boss review the MRI scans showing changes in both subjects’ brains and come to opposite conclusions. The doctor points out one patient is on a placebo; the boss is delighted that he might have found a “Viagra for love!”

“The Effect” is a brain-buster of questions in an ever-darkening atmosphere leading into an explosive, if unconvincing penultimate battle, resulting in a post-drug-trial wrap-up scene that, while not satisfying, tells the audience what the playwright’s conclusions are about drugs, love and depression.

There is no question that drugs change the emotional functioning of the brain. Stimulants increase focus, antianxiety drugs calm. We are in dangerous territory. As Connie argued with the doctor, “You can’t give us a drug that lowers inhibitions and compromises judgment and then get mad at us for making poor decisions!” When do we stop being responsible for our actions?

The development of ethical thought and its application to daily morals has lagged far behind medicine’s ability to interfere with and even to extend life beyond normal spans. As drugs become ever more potent, specific and part of our lives we need to answer the questions of responsibility.

Going back to the first question — can love be ignited by a drug? Of course. But the end of the play makes the claim that a drug can instill commitment, devotion and nurturing that lasts for years through difficult times. I don’t buy that.