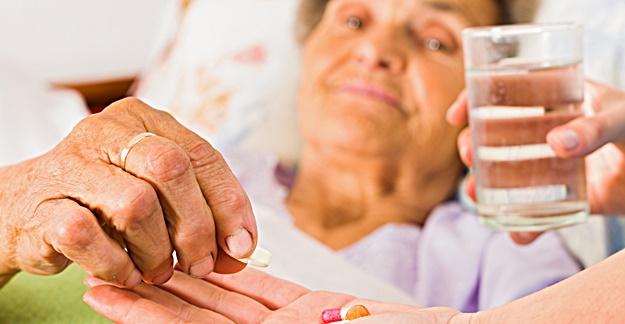 About 20% of people with Alzheimer’s disease (AD) take both a prescription opioid and tranquilizer medication together, and that’s problematic as it can lead to serious risks.

Researchers say that AD patients who took a benzodiazepine, such as Xanax (alprazolam), Valium (diazepam) and Ativan (lorazepam), along with an opioid had a higher incidence of lung disease, osteoporosis and hip fracture in the past. They added that using benzodiazepines, which are often prescribed to seniors as sleep aids, while also taking an opioid can boost the risk for pneumonia, fractures and drug misuse.

Researchers based their findings, published in the International Journal of Geriatric Psychiatry, on data on more than 70,000 diagnosed with AD in Finland.

Both benzodiazepines and opioids are on the Beers Criteria, a list of drugs that are potentially inappropriate for seniors because their risks may outweigh their benefits.

“Concomitant use of drugs that act on the central nervous system in an older population is concerning, as the use of these drugs has been associated with serious risks, especially in frail individuals with AD,” lead author Niina Karttunen, University of Eastern Finland, said in a statement. “Unnecessary co-use of these drugs should be avoided, as the benefits rarely outweigh the risks.”