Let’s Get Real About Antidepressant Side Effects 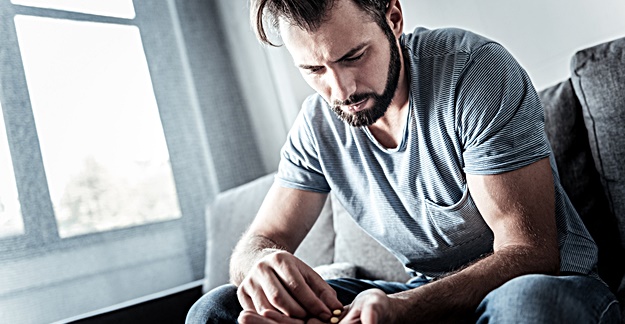 By Sean Hagey
The Mighty

Your doctor just wrote you a prescription for your depression. You were probably given some info on what the drug is, what they hope it will do for you and (if your situation is like mine) they may have mentioned “some mild side effects” may occur.

Maybe they don’t really know, or maybe they don’t want to frighten you, but I’ve found an alarming amount of doctors don’t inform you on just how common side effects are. In my experience, they certainly don’t tell you about the really intense stuff.

I remember coming back to the doctor after that very first prescription and had this interaction:

Me: I’ve been having a lot of headaches and stomach issues since I started taking that medicine.

I didn’t say it out loud, but I definitely remember thinking, “That would have been good to know before I started taking this!”

Drowsiness and fatigue can also be common, which is wonderful because we depressives already struggle with fatigue and lack of motivation.

Weight gain is reported from many antidepressants. Great, now I have a body image issue to add to the mix. What kind of sick joke is this!

My journey through this valley of cupcakes and rainbows has basically been a cruel game of “Would You Rather?”

Nausea and other gastrointestinal issues are common. Fantastic. Now I can’t even enjoy my damn ice cream without feeling like it’s going to violently come back up.

It’s taboo to talk about, but sexual dysfunction is very common. It’s as high as 50% — or more! — in some studies. For guys, that can mean erectile dysfunction. For men and women, this likely means difficulty or inability to achieve orgasm. As if being depressed wasn’t already bad enough.

And last, but not least, there’s other weird stuff. Dry mouth, lightheadedness, dizziness, agitation and my all-time favorite, “brain zaps.” Yes, I’m talking about this really freaky sensation that I’ve only had when taking a type of antidepressant known as an SNRI (serotonin and norepinephrine reuptake inhibitors, such as Cymbalta, Effexor and Pristiq). My brain says, “You know what would really lighten up the mood around here? An electrical shock!” At that moment, a bolt of lightning starts in my brain and zaps out into my face, hands and feet. It’s like a party — in hell.

My journey through this valley of cupcakes and rainbows has basically been a cruel game of “Would You Rather?”

I’ve pretty much run the whole gamut. I don’t know if there’s some sort of prize for my achievements, but I figure I should at least be considered for the hall of fame of side effects. Perhaps I should start calling myself the Babe Ruth of depressives. Please, no requests for autographs though. I’m tired, nauseous and agitated, with a dry mouth and headache from dealing with these damn brain zaps.

Sometimes you have to laugh about it or else you’ll cry. And I’ve already met my lifetime quota on that. Plus, I’ve already written about how serious, scary and horrible it is to have a major depressive episode here.

Sean Hagey is a physical therapist assistant and technology consultant who writes about his battle with depression. He runs the blog, Mental Health Matters, which focuses on mental health advocacy and education.

This article was originally published on The Mighty. Reprinted with permission of the author.

The Right Way to Get Off Antidepressants