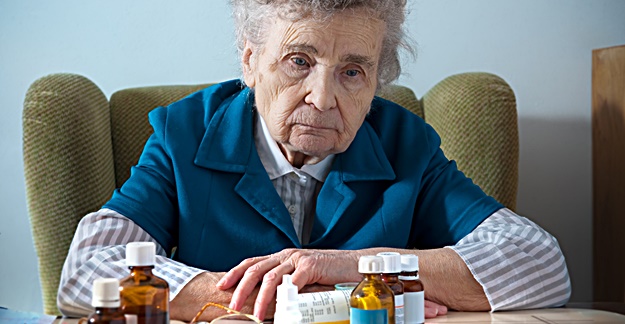 Older people who start on antidepressant medications are more than twice as likely to experience a hip fracture compared to peers who don’t use the drugs.

Researchers in Sweden looked at a registry of 408,000 patients aged 65 and older, with an average age of 80. Half were prescribed an antidepressant and the other half were not. The patients were followed for two years. The medical records of those who received an antidepressant were examined for one year before and after filling their prescription.

And up to a year after starting on an antidepressant, 3.5% in that group had a hip fracture compared to 1.3% in the other group.

Interestingly, the highest odds of experiencing a hip fracture were 16 to 30 days before treatment with an antidepressant.

The researchers, Jon Brännström, MD, Hugo Lövheim, MD, PhD, Yngve Gustafson, MD, PhD, Peter Nordström MD, PhD, note that the Beers criteria — a list of medications that may not be suitable for seniors because their risks can potentially outweigh their benefits — says that antidepressants should be avoided in people with a history of falls unless other alternatives are unavailable.

“Even if antidepressant drug use does not increase the risk of hip fracture, the prescription of antidepressants to older people should be restrictive, as the evidence for positive effects is limited,” the study’s authors write. “Antidepressants are associated with adverse effects other than falls and fractures, including QT interval prolongation [irregular heartbeat], hyponatremia [low sodium levels in the blood], and gastrointestinal bleeding.”