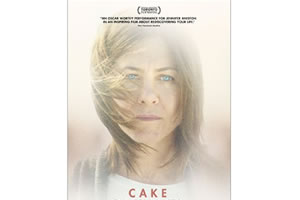 On Tuesday during the great snowstorm that wasn’t (for NYC at least), I spent the late afternoon with a small popcorn and Jennifer Aniston. I’d heard the new movie, “Cake,” portrayed how easy it was to become addicted to pain meds even when used as prescribed. That was not the movie I saw. (Spoiler alert: I freely talk about plot points in the movie.)

What I saw was a movie about how badly chronic pain and depression are managed in our country. The Aniston character had been in severe pain for more than a year after a terrible accident. She was depressed over the death of her child.

Jennifer Aniston did a terrific physical acting job. I had chronic back pain for a period of time (full disclosure, I was prescribed oxycontin and took it for 29 days. I stopped without a problem). The physical and audio portrayal of chronic pain was so familiar I cringed. Even 12 years after my back pain was resolved, I recognized the anger and the terrible fear that my intense pain would never ebb or disappear.

The film character was taking multiple pills a day (how much and what those pills were was never made clear). Pills, physical therapy and a too sympathetic maid were her only supports. Where were the alternatives? This is a wealthy woman who could afford cognitive and behavioral therapy. Where’s the chiropractor, hydrotherapy, acupuncture, mindfulness, yoga, biofeedback, meditation, cortisone shots? In this film, and too often in our society, we throw pills at the problem and hope the patient’s complaints will stop.

The character was sent to a support group for chronic pain. It was completely unbelievable that the leader had no skills to deal with the anger that goes with pain — anger is very common. There are so many more options available for someone with chronic pain. It’s distressing that the group therapist and the physical therapist both handed the problem back to the patient.

I’ve never been addicted to pain meds (or anything else, thank God). But I was unconvinced that this was a realistic or educational film about accidental addiction.

When the character was out of pills and was driven to Tijuana by the ever-faithful maid, she was clear-headed, calm and in increasing pain. Where were the signs of withdrawal — anxiety, cravings, confusion? None. There were signs that the opioids were losing effectiveness, which they are known to do. The body adjusts to the levels of pain medicines and then needs more for the same effect. That’s the problem the film wisely highlights — opioids, pain pills, don’t solve any problems. They abate the pain initially and are then only effective in increasing doses. Great if you’re selling the pills, not great if they are your only choice for pain management.

Withdrawal was a 2-minute montage scene and home again. The character did rip an IV out of her arm and declared, “No more drugs!” No rehab, no 12-step program, no cravings. I know that everyone has their own path to recovery, but seriously? Just say no?

Most addicts in recovery (even with this character’s apparently unlimited wealth) can face a shambles of a life with loss of job, humiliation, debt, and often jail time facing them. Most addicts have pushed their family and friends so far away that there is no friend who will open the door for them. Some addicts fail recovery because it’s too much. A lot of work goes into recovery. Healing a body abused by drugs, repairs to relationships, finding a meaningful activity, and creating a support network all take time and hard work.

The long road of recovery wasn’t within the scope of this movie and the character’s first steps to recovery were hopeful and appropriately small. But the support system she (and any other recovering addict) needed was not in sight and the educational opportunity was lost. However, it was an excellent movie about how our society mismanages and isolates those with chronic pain and depression and shows clearly that we should be offering more prevention strategies before addiction takes hold.