Can Therapy Animals Decrease Medication Use? 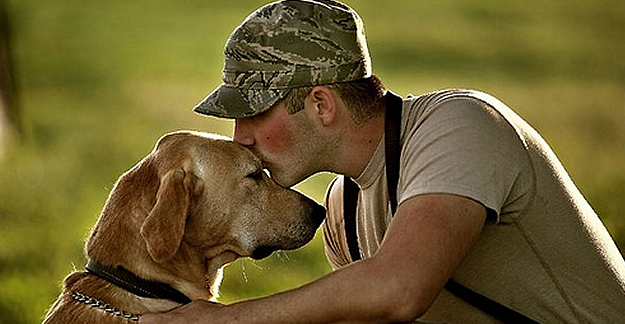 When veteran Chris Jenkins came home from his deployment, his Post Traumatic Stress Disorder (PTSD) was so debilitating that he didn’t want to leave the house. After years of isolation, Jenkins got a Siberian husky therapy dog. Now Mister goes everywhere with Jenkins.

“If I start experiencing flashbacks, he picks up on my increased heart rate,” Jenkins says. “All of a sudden I have a nice, cold wet nose in my face. The unconditional love that a dog gives just snaps you out of it.” Jenkins prefers his dog’s ministrations to PTSD medications. “I find my service dog a lot more effective,” he says. Jenkins also notes that with the assistance of Mister his symptoms have eased without the side effects of drugs. Jenkins has improved so much, in fact, that he now manages the veteran-owned D&K Pet Training in Dayton, Ohio.
Continued below slideshow

The tradition of dogs helping soldiers goes back to World War II when Smoky, a Yorkie terrier, cheered up patients at field hospitals in the South Pacific. Now animal interventions have expanded to encompass many types of animals and health conditions. In the past few decades the field has become more formalized and better studied.

Amy McCullough, national director of humane research and therapy for the American Humane Association, divides the benefits of animal interventions into four categories: physical, psychological, behavioral and social. Goals range from improved socialization for dementia patients, to calming down vets with PTSD, to guide dogs for the blind.

Animals are also differentiated by their use or training.

Costs vary greatly, depending on the type of intervention. Animal-assisted therapy in an institution is absorbed into the overall cost of treatment. Pets require an adoption fee, then a lifetime of food and veterinary care. Well-trained service dogs often cost $10,000 to $20,000, says McCullough. While these costs are seldom covered by insurance, many nonprofits make service and emotional support animals available to veterans and other people high on need and low on funds.

Researchers who study animal interventions in human health face many obstacles, says McCullough. It’s hard to access clinical settings, which are more accustomed to drug trials than what they might term a social science experiment. And there are few governmental funding mechanisms for these studies.

Animal tests are difficult to standardize. Even if you use the same breed of dog and carefully time visit length, the personalities of individual dogs and people affect their interactions. “Obviously you’ll never have a blind study because you’ll know whether you interacted with an animal or not,” says McCullough.

She describes a chicken and egg scenario where studies can’t get funded because there’s not enough evidence to prove animal interventions are a feasible modality. “I feel it’s held the field back,” she says.

Peggy Nepps, clinical psychologist at Lancaster General in Pennsylvania, agrees the research is too anecdotal. “We know at a gut level that it works,” says Nepps, who researches and publishes in the field of animal-assisted therapy. “But the research tends to be fairly short-term.” She suggested that studies of long-term human/animal interaction would be necessary to determine longer-lasting effects such as reduction in medication use.

A 2012 study led by Rick Yount, executive director of the Warrior Canine Connection, examined how interactions between veterans with PTSD and the service dogs they trained increased oxytocin in the veterans’ brains. Oxytocin increases people’s sense of safety, closeness and trust in others. Among many positive effects, the veterans reported a decrease in the use of pain medications.

It’s often easier to trust a dog than a person, especially if you suffered trauma inflicted by other people. According to Phil Tedeschi, director of the Institute for Human-Animal Connection at the University of Denver, pairing a veteran with a good therapeutic or emotional support dog is often more fruitful than other interventions. “It’s not that the dog is an alternative to human relationships,” he says. “It’s a bridge back to that process.”

A 2007 study led by Elaine Lust of the Creighton University School of Pharmacy and Health Professions examined the effects of a live-in therapy dog on 58 residents of a rehabilitation facility. Researchers measured changes in administration of as-needed drugs. The dog’s presence correlated with decreased use of analgesics, lower pulse rates, and residents’ claims of better quality of life. Researchers concluded that therapy dogs had the potential to decrease both medication usage for long-term care patients and costs. They suggested that pharmacists become involved with animal-assisted therapy to improve patient care.

Types of Animals Used in Therapy:

While dogs are by far the most common therapy animal, here are a few unusual examples of animal interventions:

Pets don’t need special training to provide health benefits. A 1998 Australian survey led by researcher Bruce Headey found that cat and dog owners made fewer doctor visits and were less likely to use sleeping aids or heart medications than non-owners. Of cat owners surveyed, he found that 4.2 percent were on some type of medication while 5 percent of non-owners were medicated. Headey believes the study suggests pets have a calming effect on people. He estimated that pet ownership saved Australia $988 million annually, about 2.7 percent of the country’s health expenditure.

A 1999 study led by psychologist Judith Siegel of the UCLA School of Public Health found that owning a pet could reduce the likelihood of depression for men living with AIDS or HIV. The study included 1,800 men, but did not specifically track the effect of pets on medication use.

“It makes sense because we know when people are stressed it has a negative effect on their neural system, because you pump out more cortisol and norepinephrine,” Nepps said of the study. “You go into fight or flight and your immunity is reduced.” One can speculate that the presence of pets might result in consumption of fewer antidepressants.

While using animals in therapy has its drawbacks – the potential for bites, scratches, allergies or messes – Dr. Takanori Shibata avoided those problems by inventing a robotic baby harp seal named PARO.

The highly interactive seal coos, moves its flippers and turns its head toward human voices. Patients are attracted to its vulnerability, says Davis Park, director of the Front Porch Center for Innovation and Wellbeing. “It’s got these huge, dark eyes. When you look upon its face, it’s very mesmerizing, very adorable.” Front Porch is testing PARO in a 12-bed memory care unit and a 48-patient skilled nursing home in California. PARO definitely calms patients. Staff found that out of 40 times when they tried using PARO to de-escalate anxious, disoriented or disruptive patients, they avoided administering psychotropic medications 25 times.

Whether petting a real dog or a cute seal robot, interaction calms many patients. Further studies in the animal — and animal robot — field seem very promising for a wide range of conditions and outcomes, including decreasing medications.