Common Drugs Can Cause Dementia 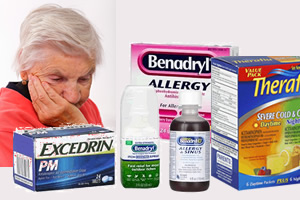 The primary ingredient in Benadryl and the secondary ingredient in Tylenol PM is reported to have a cumulative effect in the human brain which can cause as much as a 54% increase in the likelihood of dementia or Alzheimer’s in consumers who use it regularly. This is according to a study published by JAMA, Jan. 26. 2015. 11% of Americans 65 years and older have Alzheimer’s or dementia. A big increase in the likelihood of getting dementia is important.

Gary Alony, president of Thompson Chemists, a pharmacy in NYC, is not surprised by the findings. “You have to be careful with Benadryl. The ingredient in Benadryl, diphenhydramine, increases the effect of many other drugs, particularly pain relievers and opioids. Junkies have been known to take Benadryl along with heroin to increase and extend the high.”

The active ingredient in Benadryl is diphenhydramine, which is an older antihistamine. There are newer drugs on the market that can replace it if there is a need to use it long-term. Even better, why not try to relieve symptoms with non-drug alternatives? Mother Earth News has a good article on alternatives such as sinus flushing, sublingual immunotherapy (drops under the tongue of the allergen to acclimate the body) and herbal remedies.

Alony suggests, “If you have occasional insomnia, relax, read a book, go to work early. You can get through one day tired.” He adds that if you still have difficulty sleeping try camomile tea, valerian root, melatonin, calcium and magnesium all have relaxing properties without a lot of interactions with other drugs. Always discuss supplements and herbs with your doctor or pharmacist for interactions.

Some other common drugs with diphenhydramine include (bat are not limited to): Excedrin PM, Theraflu, Contac Day and Night, Mucinex Fast Max, Theraflu Nighttime, and more.

About the study: It seems pretty solid. The researchers reviewed the drug history for the previous 10 years of more than 3.400 adults aged 65 years or older who had no dementia at the start of the study. Those adults were reviewed again every 2 years for an average of 7 years. The participants were from an integrated healthcare delivery system in the study called  Adult Changes in Thought in Group Health, in Seattle, WA. Diagnoses of dementia or Alzheimer’s grows rapidly with age; however, those who used drugs in the anticholinergic class proved to be at increased risk for cognitive impairment.

Diphenhydramine has been available since 1946. It’s shocking that a drug used for so long and by so many people might be harboring a devastating long-term effect. MedShadow, along with many other organizations, suggests favoring drugs that have been on the market 5 years or more, hoping that significant side effects and long-term effects have been uncovered in that time frame. But with the inherent limits of the US adverse event reporting system and without required ongoing studies with sufficient oversight, the link between some adverse effects and a drug might not ever be uncovered. Using drugs only when needed, in the smallest doses effective and for the shortest period of time possible, is the best policy for avoiding unknown outcomes.