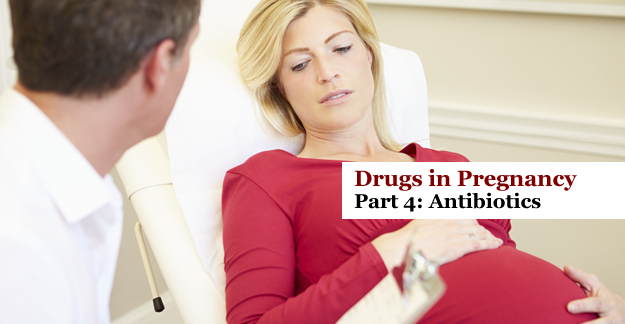 In Part 4 of our 7-part Drugs in Pregnancy series, we tackle antibiotics. If you’re wondering whether taking an antibiotic is a good idea or harmful to your baby, the answer is a resounding … it depends. It depends on the infection at hand, for one thing; most must be treated, as not doing so would cause more harm to you than it would pose a threat to your baby. And it depends on the drug itself: There are many types of antibiotics, some considered safe, some no-no’s.

For more on pregnancy and drugs, see parts 1 through 3 in our series, and check out our Drug  Classification of Prescriptions Medicines During Pregnancy. And always ask your doctor or other healthcare provider what course of treatment is best for you and your baby.

Unfortunately, bacterial infections wait for no one. You don’t want to leave any infection untreated and, used wisely, antibiotics effectively kill the harmful bacteria and associated infection. The majority of commonly prescribed antibiotics don’t have any known risks to the pregnancy, says Lori Wolfe, a certified genetic counselor and president of MotherToBaby, a free, national informational service of the nonprofit Organization of Teratology Information Specialists.

Some 10% to 15% of pregnant women develop urinary tract infections, which could cause premature labor and pyelonephritis, a bacterial infection in the kidneys. Amoxicillin, amoxicillin-clavulanate, and cephalexin are the antibiotics used for UTIs with the least risk to the fetus. Studies suggest avoiding sulfonamides, which may be prescribed for UTI during pregnancy, and nitrofurantoins, which have been associated with several birth defects.

To prevent UTIs, wipe from front to back after using the bathroom to avoid spreading fecal bacteria to your vagina, take showers instead of baths, and ask your doctor about a probiotic that promotes good gut bacteria. As for cranberries, there’s conflicting evidence of whether drinking cranberry juice or taking cranberry supplements actually prevents UTIs.

A common infection, Group B Streptococcus, or GBS, is present in the vaginas and/or rectums of about 25% of pregnant women. If untreated, it can cause serious complications for pregnant women, such as cystitis, amnionitis, endometritis, and stillbirth, and occasionally, endocarditis or meningitis, and life-threatening infections in the newborn. The CDC recommends all pregnant woman are screened for GBS at around 37 weeks gestation, as it’s often asymptomatic. GBS is usually treated at time of delivery with IV penicillin or ampicillin.

Some antibiotics should be avoided during pregnancy. These include tetracycline and doxycycline, which if used during weeks 16 through 40 can deposit in the baby’s developing teeth and bone, resulting in staining to their permanent teeth. This has been known for several decades, so most doctors usually don’t prescribe these antibiotics to pregnant women. A few other antibiotics are considered ototoxic, meaning there’s a risk of hearing loss to the mother, but these are not among those commonly prescribed.

New research by Columbia University’s Mailman School of Public Health found that prenatal antibiotic use puts offspring at an 84% higher risk of obesity later in life, compared with children who were not exposed to antibiotics in utero. This study adds to previous ones that have shown that antibiotic use given early in a child’s life may be associated with an increased risk of obesity in childhood. Researchers believe that the antibiotics may enter fetal circulation via the placenta, affecting the normal transmission of healthy bacteria from the mother to child.

To keep the bacterial levels in a healthy balance, and to avoid side effects such as diarrhea or constipation, take a probiotic simultaneously, though at different times in the day. Ask your doctor which probiotic makes the most sense for you.