A Glass of Cheer Can Impair Your Medicine 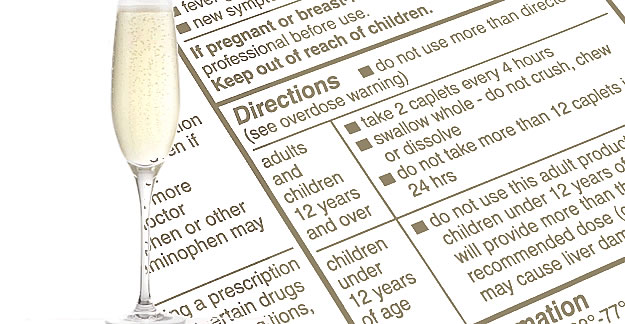 Everyone knows not to mix alcohol and prescription medicines, right? But the math indicates a lot of people are doing it. More than half of all Americans report having a drink in the past month or more frequently. Almost 70% of adult Americans are on prescription drugs. If you are taking Lipitor, Ambien or Xanax you need to think twice about the cocktail hour.

April is Alcohol Awareness Month, a good time to double-check the list of potential interactions.

Consider the effect of alcohol in your body: it’s a depressant so it slows the central nervous system. A little alcohol often helps a person feel more relaxed or less anxious. A little more results in slower reaction times, impaired judgment, low blood sugar, low blood pressure, and makes you feel depressed. It also challenges the liver. Any drugs with similar depressant properties will increase or even multiply the effects.

If you take a drug to lower your blood pressure, alcohol will lower it further. When blood pressure dips, expect dizziness, light-headedness and, possibly, fainting.

In addition, drugs for depression mixed with alcohol increase the risk for overdose and lead to increased feelings of depression or hopelessness in adolescents and raise the risk of suicide.

Alcohol intensifies the effectiveness of sleeping pills, causing such low blood pressure and severe sleepiness that you could be at risk of stopping breathing in your sleep. (Watch out for interactions with Ambien, Lunesta, Sominex, and herbal preparations including chamomile, valerin and lavender.)

Another factor to check: Certain medicines contain up to 10% alcohol. Cough syrup and laxatives often have some of the highest alcohol concentrations.

Over-the-counter painkillers like ibuprofen and aspirin aren’t usually a problem with light drinking. “Painkillers and booze are perhaps the worst to mix, because both slow breathing by different mechanisms and inhibit the coughing reflex, creating “a double-whammy effect… that can stop breathing altogether,” according to Scientific American. Alcohol and painkillers together impair thinking (potentially causing you to take more medicine or drink more) and motor skills. Alcohol increases their sedative effect, causing blood pressure to drop, sometimes leading to breathing problems and death.

Anti-seizure (anticonvulsants) are sometimes given for pain management. Combining them puts you at risk for seizures and will likely make you severe drowsiness or make you lightheaded.

Doctors are not in agreement about steroids like prednisone and alcohol. There isn’t much research on it and many doctors say light drinking is fine. However, others point out that both prednisone and alcohol have the ability to irritate the stomach, leading to possible stomach ulcers or gastrointestinal system irritation. Both prednisone and alcohol can suppress the immune system and the combination can make it worse. Some docs think that alcohol increases the side effects of prednisone: rapid weight gain, facial swelling, anxiety, acne, dry skin or skin discolorations.

Drinking any alcohol puts some stress on your liver. Statins like Lipitor, Crestor, Zocor and acetaminophen like Tylenol also clear your body through your liver. The combination can put you at risk for liver failure more quickly than you might think.

Acetaminophen is commonly included in allergy, cold and flu medicines. If you aren’t aware of that and take a couple of Tylenol for other symptoms, you can easily go over the recommended dose. Add a glass or two of wine and it increases the strain on your liver. (Delsym, Robitussin, Allegra, Alavert, Claritin, Dimetapp, Sudafed, Triaminic, among others, contain acetaminophen – be sure to check the label.)

Just because you take a pill every day doesn’t mean it’s your new “normal” or that one drink won’t hurt. How many Hollywood headlines do you have to see to realize it can happen to anyone, even you?

This article was originally published Dec 23, 2013.