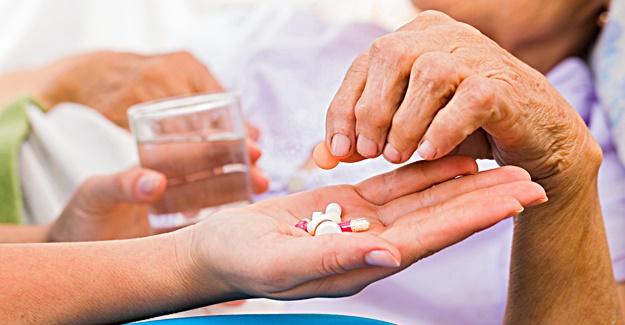 Geriatric physician Michael Steinman, MD, says there’s an old saying about seniors who feel sick. “Any symptom in an older adult is a medication side effect until proven otherwise.”

In other words, what’s ailing you may be the same thing that’s supposed to make you feel better. Of course, people often put up with side effects because the drugs they take will help them in the long term. But what if a patient is expected to die within months or a year or 2 at most?

“It’s common for people who are nearing the end of life to be on many medications which have outlived their usefulness and may no longer be helping the person, but actually hurting them,” says Dr. Steinman, who treats patients at the University of California, San Francisco and the San Francisco VA Medical Center.

Dr. Claudene George, a geriatric physician at Montefiore Medical Center in Bronx, NY, who’s also a pharmacist, says she’s seen patients with advanced dementia and a limited lifespan take a variety of unnecessary drugs. One patient took a proton pump inhibitor – medications typically used for acid reflux (heartburn) and indigestion — despite not having any symptoms for reflux, the condition that it treats.

These can cause significant side effects and make life more difficult. Aspirin, for example, is notorious for causing stomach bleeding. And calcium/vitamin D supplements can cause nausea, weakness and constipation, among other unpleasant adverse events.

Dr. George has even seen a patient suffer from low blood pressure while on the worst drugs possible to take while suffering from that condition — several medications designed to reduce blood pressure.

Research supports the anecdotes. A 2016 study, for example, tracked 244 patients with an average age of 74 who weren’t expected to live more than a year; nearly half had malignant cancer. In total, the patients took 423 different medications, an average of 12 each, including many that treat chronic conditions instead of directly alleviating symptoms.

As the study notes, long medication lists are difficult for patients at the end of life to manage. Many terminally ill people are expected to take pills multiple times per day even though they have difficulty swallowing. Some don’t eat much, making it harder to take medications with meals. And, of course, more pills are more expensive.

Unfortunately, it’s hard to know exactly which drugs should be stopped or reduced in a patient who’s expected to have only months to live. As this study notes, “…there remains little guidance or recommendations regarding the appropriate discontinuation of medications near the end of life.”

However, a study published in 2015 found that physicians could safely withdraw cholesterol-lowering drugs known as statins in certain patients considered to have between 1 month and 1 year to live. As the study notes, benefits from the drugs — which are taken by 1 in 4 Medicare patients — don’t kick in for 2 years.

Patients who stopped the drugs had a better quality of life than those who didn’t. The drugs can cause side effects like digestive symptoms and pain, and they can interact with other medications to cause even more problems. The average cost savings was more than $700 per patient who stopped the drugs, researchers reported.

Dr. Steinman says it’s important to understand which drugs help patients feel better “in the here and now” and which are designed to prevent future problems.

Drugs like laxatives and pain medications treat current symptoms, says Dr. Steinman, who helped develop a list of drugs – known as the Beers Criteria — whose use may be inappropriate in older adults. In contrast, blood pressure and cholesterol-lowering drugs are preventive medications, he says, as are those that strengthen bones.

But drugs like insulin can be tricky. At the end of life, it’s not as important to tightly control blood sugar in patients with diabetes, he says, since the goal of the drug is to prevent complications several years down the line.

“On the flip side, if you require insulin and just stop it abruptly, your blood sugar might rise to where you’re feeling bad right now — dehydrated, dizzy, even passing out and going into a coma,” Dr. Steinman says. “That’s not something you want to have happen in the next week if you have a year to live.”

There’s another potential complication to reducing medications in the terminally ill: Resistance from families and caregivers.

Dr. George says she’s managed to successfully reduce the drug load in patients at the end of life, but it isn’t always an easy task. “The challenge often lies in convincing the patient’s loved ones or primary caregiver of the planned discontinuation,” she says.

“Many caregivers have been dedicated to careful administration of medications and may feel that discontinuation symbolizes ‘giving up’ or will hasten death.”

What can patients, families and caregivers do to make sure patients at the end of life aren’t taking unneeded and potentially dangerous medications?

It’s crucial to ask questions. “A lot of medication-related problems exist and continue because of what we call clinical inertia — things get started but they don’t get stopped,” Dr. Steinman says. “Side effects might start or stop, but no one is asking about them.”

Here are some questions to ask: Why is the patient taking these medications? What side effects should the patient look for? Could any medications be stopped or reduced permanently or over a test period? If not, might alternative medications that cause fewer problems be appropriate?

You may also wish to enlist a pharmacist to assist by asking for a medication review. Make sure to note any vitamins or minerals that a patient is taking since they may be unnecessary and potentially dangerous just like medications.

“Pharmacists,” Dr. George says, “can be essential during the process.”