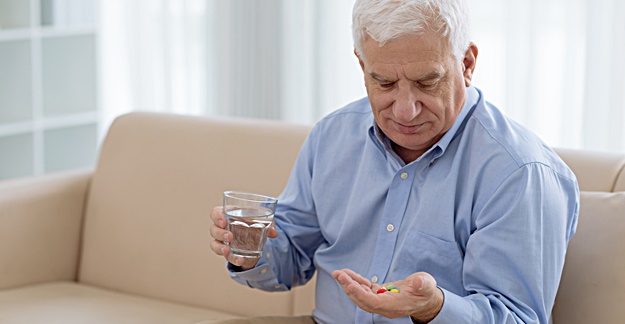 A few years ago, I wrote about my friend’s mother, an energetic 90-year-old who had suddenly started falling and was speaking of being done with life. The mother had started on a prescription for Ativan, a tranquilizer, a couple of months before because she was anxious about an upcoming family trip.  Ativan (lorazepam) is generally well tolerated, but it’s not good for seniors. It increases their risk of falling  and many have feelings of depression while on the drug.

I didn’t know that until I discovered the Beers Criteria. Put together by the American Geriatrics Society, it is the standard list of common medicines that are potentially inappropriate medicines for seniors.

Seniors have an increased sensitivity to certain medicines — often drugs they’ve used for decades without a problem. These drugs may be so common that they are part of our everyday language, like Xanax, Benadryl, Advil, Motrin and Tylenol PM. However, many should be purged from a senior’s medicine cabinet.

Why does this happen? Seniors’ internal systems slow down as they age. Drugs stay longer in the body, building up to toxic levels more easily, and putting more strain on the stomach, liver and kidneys. They can tax the heart and confuse the brain.

Beers Criteria identified 34 medications and drug classes (pdf) that are potentially inappropriate for older people. Here are 5 groups of drugs to avoid:

such as Tylenol PM and Unisom that contain diphenhydramine can cause confusion, falls and last much longer than expected. Prescription sleeping drugs like Lunesta (eszopiclone), Sonata (zaleplon) and Ambien (zolpidem) are all to be avoided because the limited benefits don’t outweigh the risks. They are almost only meant to be taken for a short period of time (a couple of weeks at the most).

such as Ativan, Xanax (alprazolam) and Valium (diazepam) because they increase the risk for falls and mental decline. They can also lead to confusion and last longer than expected.

should be avoided in seniors with a history of falls or fractures.

The good news is that there are plenty of alternatives to the drugs listed in the Beers Criteria.

About my friend’s mother: She stopped the Ativan and, after waiting a week or more for it to clear her system, her depression lifted. With the depression gone, she could address the issues creating her anxiety and went on the trip. She’s fine now at 93 and grumbles about her daily Vitamin D pill, the only medicine she takes.

Pay attention to what drugs you take if you’re a senior or if you care for one. Check with the Beers Criteria and make sure that your doctor does too.