Who’s to Blame for Addiction? 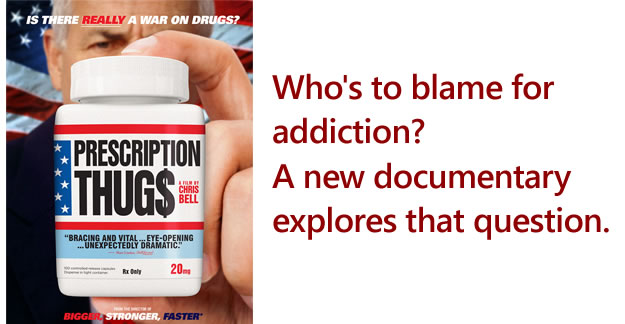 I’m not a big documentary fan, but I was drawn in by the title “Prescription Thugs” (released in theaters January 22, 2016 and now available on many pay-per-view platforms). This is a very personal first-person documentary on painkiller medicine addiction by filmmaker Chris Bell. “Prescription Thugs” is a follow up to his first documentary, “Bigger, Faster, Stronger” (2008) in which he explored the use of steroids.

In “Prescription Thugs,” Bell uses his brother’s death due to his addiction to painkillers as a jumping off point to explore how quickly and easily people become addicted to opioids. Bell’s brother was WWE (World Wrestling Entertainment) professional wrestler Mike “Mad Dog” Bell. WWE fans might be interested in the interviews with WWE alums Ryan Sakoda and Matt “Horshu” Wiese about their own addictions, hopefully recovering now.

The 86-minute film tries to do a lot. Bell interviews his own family members multiple times, his brother’s friends and few other professional athletes, and a “normal mom,” who all confess to having had serious addictions to pain meds or, in the mom’s case, ADHD meds.

“Prescription Thugs” segues smoothly into the science of how opioids are similar to heroin, one of his interviewees pointing out, “Opioids are just like heroin except the high is better with opioids.” And Bell does a credible job of explaining direct-to-consumer advertising and its role in the addiction epidemic.

‘You can’t believe how fast you get addicted.’

Ultimately, Bell tries to do too much and to spread the blame as far as he can. Professional sports are to blame for addictions because they require athletes to play every day and athletes turn to pain medicines to keep themselves in the game. Drug ads for consumers condition us to ask for drugs. Society’s pressures gave Mike Bell a fear of being average, so he took the drugs even when he wanted to stop. Doctors profit by keeping you sick (that’s a quote from the film). As a society we are unwilling to tolerate any pain at all.

But Bell’s main target, the biggest “thug,” is the pharmaceutical industry. According to Bell, Big Pharma seduces us into believing we should never have any pain or sadness. Doctors are misled by Big Pharma studies that don’t tell the whole story. Big Pharma is out to sell as many pills as it can. Big Pharma’s only concern is profit.

The takeaway from “Prescription Thugs”? “You can’t believe how fast you get addicted,” which came up in nearly every interview. And the fact that the pharma industry is doing exactly what its stated purpose is: to make money.

There is a health care crisis today based on opioid addiction. This is a good intro to the problem, but short on ideas for solutions.