Weird Side Effects of Cancer Immunotherapy Cause Confusion 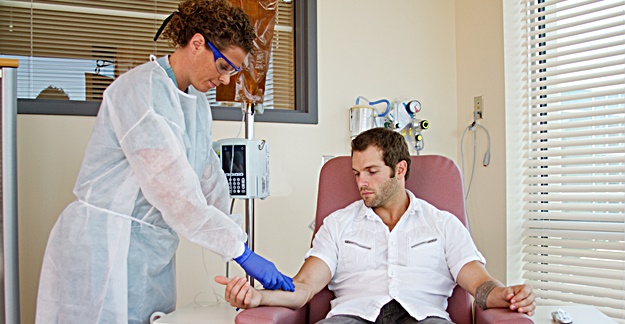 In late fall 2015, Norma Leigh Perry, a teacher in Tunica, Miss., had been on a combination of new cancer drugs for recurrent melanoma for months without a problem. Compared to previous drugs she had taken throughout her treatment, which dated back more than 2 decades, these new drugs, a type of immunotherapy known as checkpoint inhibitors, were easy to tolerate. “I was fatigued for a couple of days, but other than that it was fine,” she said.

Later, she was put on a MEK inhibitor, another common treatment for melanoma but one that falls into a class of drugs known as targeted therapies. While they often have fewer side effects than chemo, they can still be significant. “The pills worked, but they messed with my vision, so we had to cut them out,” Perry said.

Previously she’d taken interferon, a common treatment for melanoma with long list of side effects. “Interferon is the ‘old school’ way of treating melanoma,” she said. “It made my hair very thin, and I had the same side effects as someone on straight chemo — I lost a lot of weight, it made me sickly, and I was dealing with fatigue.”

Compared to these side effects, when she had an upset stomach in 2015 in between doses of immunotherapy, she never attributed the problem to her cancer treatment. After all, she’d had 2 courses of treatment without a problem. “I thought I had a stomach virus. I still had kids in school, and you know how it is when it goes around the school,” she said.

When it didn’t clear up by the third day, she called her oncologist at West Cancer Center in Memphis, Tenn. “He said, ‘You go straight to the hospital.’ That was the first time that I was like, ‘OK, this is serious.’ It never hit me — it never occurred to me that it was part of the treatment,” Perry said. “He had been telling me to watch out for it, but I never had symptoms like that, and so it didn’t dawn on me. I just thought I had a stomach virus.”

Like other immunotherapies, the checkpoint inhibitors that Perry was on, Yervoy (ipilimumab) and Opdivo (nivolumab), were designed to help her own immune system attack the cancer. However, in doing so, they’d also turned against her own healthy tissue, in this case in her gastrointestinal tract.

When it does, immune-mediated side effects — those that occur when the immune system attacks the central nervous system — like inflammation are the most common. “The side effects of immunotherapy are almost all related to autoimmune diseases,” said Dr. Whitman. Fever, chills and nausea are the most common. However, patients can also have more severe effects, like inflammation of the lungs (pneumonitis), inflammation of the large bowel that leads to diarrhea (colitis), or endocrine disorders, including thyroid abnormalities and adrenal insufficiency.

“The problem with these things is that they are not predictable in when they are going to occur,” said Lee Schwartzberg, MD, medical director at The West Clinic in Memphis. “It is a longer-range problem that can come on months or even years after the drug has been started.”

This unpredictable timing can make patients, who often expect side effects to come immediately after treatment, as with chemotherapy, reluctant to recognize a drug’s unintended effects.

“There has been a couple of times they’ve pulled me off treatment because of blood work that has skewed and has the potential to be a side effect of the medicine, even though it’s not something that I have felt,” said Doug Wilcox, 58, a plant manager in Horn Lake, Tenn., undergoing treatment for kidney cancer. Earlier this year, for example, Wilcox’s oncologist discontinued his immunotherapy treatment because his blood tests showed abnormal pancreas function.

“I kind of fought them,” said Wilcox. “I said, ‘I like taking the pill. It seems to be working. You’re saying I’ve been taking this drug now for over a year a half and all of a sudden it’s bothering my pancreas?’”

When Side Effects Arrive Late in Treatment

According to Dr. Schwartzberg, this is a typical scenario. Both the unpredictable timing, and the fact that side effects of immunotherapies can be vague, make it more difficult for both patients and non-specialist physicians to recognize these side effects.

“Because these are late symptoms, and because patients are generally feeling well, they may seek advice from a primary care or ER doc before the cancer team gets wind of it,” said Schwartzberg.

“The scenario is that a patient gets acute diarrhea, waits a couple of days and then goes to the emergency room and then by that time is already pretty sick. The most common cause is typically infectious colitis, so the ER doc or primary hospitalist will treat the patient with antibiotics as opposed to what should be done [for patients on immunotherapy], which is high-dose steroids, or even an immune modulating agent to turn off the immune system.”

For these patients, the most important thing is to call their oncologist at the first sign of trouble. “I tell patients that these drugs can cause a lot of weird side effects,” said Whitman. “If anything strange happens, the safest thing to do is to call us. It’s probably from the drug; it’s probably not from food that doesn’t agree with you, or that your grandson is sick and sneezed on you.”

Dr. Schwartzberg said that every immunotherapy patient at the West Clinic in Memphis gets a wallet card that states the patient’s disease, their drug, and the on-call number of the oncology office.

“What we try to impress upon patients is to remember that they have this card, and if they have symptoms, no matter what they are, if they’re sick enough to go the ER, the first thing the ER doc should do is call the number on that card so we can walk them through and discuss the symptoms,” Schwartzberg said. “That has been very effective.”