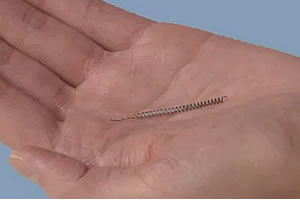 I had only vaguely known of Essure as a permanent birth control device. It’s essentially 2 tiny copper wires that are screwed into the entry way of the fallopian tubes causing inflammation that blocks sperm from entering the uterus. The first 90 seconds of this video from Bayer, the manufacturer, shows the implantation. Icky, but it is done without surgery and the recovery is a couple of days — which is a huge benefit for women over the few other permanent birth control options.

Then I read the New York Times article detailing the many problems that thousands of women are having with the device after implantation and the story seemed outrageous, until I did some further research.

Two key studies conclude that Essure is safe, painless and effective. However, reading the studies only raises more questions. I read the 5-year post-approval follow-up study the FDA required and the 2014 review that the FDA undertook of adverse events —  and my questions and concerns mounted. Some women who have had medical problems that they link to the device are furious at least in part because their first-hand experience is being discounted as without merit. Dozens of those women demonstrated outside an obstetricians’ convention in early May.

How Good Is the Research?

When Essure was approved in 2002, the FDA expressed concern that the research presented to them only followed the women for 2 years while the implant is designed to be permanent. For that reason Conceptus (the owner until 2013) was directed to conduct a 5-year follow up study. The study wasn’t released until late April 2015, 8 years after the study should have been completed. The study, paid for by the pharmaceutical company (of course)  and published in the Journal of Minimally Invasive Gynecology, concluded that, “The findings from extended follow-up of the phase III trial with Essure inserts further support the effectiveness, tolerability, and satisfaction of this nonhormonal, nonincisional, option for permanent contraception.”

Many question the research, pointing out that 518 women started the trial and only 449 women were still accounted for at the end of the 5-year period. There was not one pregnancy reported among the 449, which is unlikely — even tubal ligation fails for a small percent. The “comfort” of Essure was rated “good” to “excellent” by women still using Essure 5 years later. Satisfaction was rated 98% by combining the “somewhat” and the “very satisfied” groups. Only 3 severe events were reported. With results so at variance to hundreds or more anecdotal stories, it would be helpful to have the information on why 69 women, more than 10%, needed to drop out of the study.

Another challenge to the quality of the study was raised by National Center for Health Research. In their words:

When new medical implants are studied it is difficult to determine whether health problems that occur afterwards are caused by the device or not. Randomized double blind clinical trials are the gold standard for studying new drugs, but can’t be used for implanted devices — you can’t sterilize some patients using Essure and pretend to do so with other patients — that would not be ethical. But researchers can, for example, compare 500 women with Essure implants to 500 women of the same age and same health status who used other types of birth control, and then objectively study their health to determine whether pain and other reported health problems are more common with Essure than with other types of birth control. That is not the kind of study that the FDA required, and it is not the kind of study that the company did. Instead they just studied women using Essure, without comparing them to other women, and assumed that the health problems the Essure patients experienced were not caused by Essure unless the evidence was irrefutable — such as Essure falling out or causing an infection. That is a very poorly conducted study at best, and the results therefore can’t prove how safe Essure is.

The FDA conducted a review in June 2014 of adverse events reported on MedWatch, the governmental reporting system for medical devices. The FDA reported that:

The FDA did not release any context for this data. It does not supply how many women these devices were implanted into in the US. The report concludes that, “To date, none of the above information the FDA reviewed has established a causal connection between Essure and certain reported problems, such as extreme fatigue, depression, and weight gain.”

Despite the FDA’s assurances, many patients seem to remain unconvinced. An Essure Problems Facebook community page has 5,600+ “likes.” And popular activist Erin Brockovich has started a website to host personal stories and petitions to stop Essure.

This all reminded me of the Copper 7 IUD debacle in the 1970s. More than 2,000 young women in the US sued Monsanto (who had bought the manufacturer Searle) for a variety of complaints including pelvic inflamation that led to sterility. There were stories about babies born with the Copper 7 imbedded in the newborn, pieces of the 7 breaking off and being found in other organs. Monsanto withdrew the product quickly after buying Searle. The FDA has never withdrawn its approval of the Copper 7 IUD. In fact, a varient called the Copper T IUD is used in the US and is the most used contraceptive worldwide. For more information, here is a legal summary from the Manhattan Institute for Policy Research.

It might well be that Essure is the safe, painless and effective birth control that Bayer and the FDA say it is. However, there’s a lot of smoke here, and it looks like unhappy patients are starting a fire.