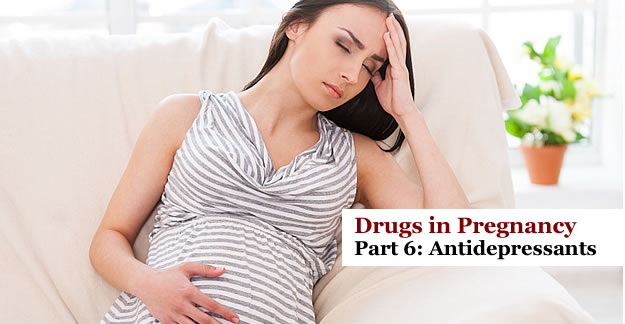 In Part 6 of our 7-part Drugs in Pregnancy series, we tackle the difficult issue of antidepressants during pregnancy. As we noted in the intro to this series, about 90% of pregnant women take at least 1 medication during pregnancy, with 70% taking at least 1 prescription drug, according to the National Birth Defects Prevention Study. That said, it’s safe to say most pregnant women don’t want to do anything to harm their unborn child, but they’re often in a bind when they have to take certain meds — and few drugs fit that description better than the antidepressants that allow them to function, says Lori Wolfe, a certified genetic counselor who advises women about the risks of medication use in pregnancy and while breastfeeding. (Wolfe is also the president of of MotherToBaby, a free, national informational service of the non-profit Organization of Teratology Information Specialists).

For more on pregnancy and drugs, see the other chapters in our series, and check out our Drug  Classification of Prescriptions Medicines During Pregnancy. And always ask your doctor or other healthcare provider what course of treatment is best for you and your baby.

Suffering from Depression When Pregnant

Kelly Kautz, who has suffered from depression and anxiety since she was 13 years old, tried to go off her antidepressant before becoming pregnant. “I had been on them for about 10 years and thought maybe I don’t need them anymore,” says Kautz. “But when I was off them, the symptoms were so horrible that it was really the only way I could get through the pregnancy safely.”

Kautz had been on Cymbalta before the pregnancy and asked her psychiatrist for advice. “He looked it up, saw that Cymbalta was a Class C drug, and he actually became really uncomfortable seeing me because of the medical risk, and he dropped me as a patient,” says Kautz.

She discussed antidepressant use with her ob/gyn, who had her switch to Prozac. Because of a small concern with Prozac and fetal heart defects, Kautz’s ob/gyn ordered additional ultrasounds to make sure the baby was developing correctly. Kautz also took the lowest dose possible to further minimize any risk. Because she breastfed her son, now 2, her doctor switched her again, to Zoloft, because it doesn’t accumulate in breastmilk at the levels of Prozac.

Currently, 13% of pregnant women take an antidepressant during pregnancy, most commonly prescribed for depression and anxiety. According to American College of Obstetricians and Gynecologists (ACOG) guidelines, all psychotropic medications cross the placenta, are present in amniotic fluid, and can enter human breast milk. When possible, before becoming pregnant ask your doctor about getting off your antidepressant or switching to one with the fewest fetal risks, says Wolfe, as most psychotropic drugs take several weeks before they reach their full efficacy in the body.

Since 50% of pregnancies are unplanned, chances are, if you are being treated for depression, you may be on such a drug before realizing you are pregnant. Don’t stop any medication without a doctor’s oversight — stopping could result in a relapse of your underlying psychiatric condition.

A recent review (PDF) of the current literature of antidepressant use during pregnancy found a potentially significant increased risk for miscarriage, preterm birth, and low birthweight (less than 2,500 gm, or 5.5 lbs.). Exposure to psychotropic drugs in utero can put infants at risk of developing symptoms of Poor Neonatal Adaptation (PAN), including mild neurologic, autonomic, respiratory and gastrointestinal abnormalities. However, the review authors could not definitely conclude whether the mother’s underlying mental illness, antidepressants or a combination of both are what led to the increased risks.

In some cases, the risks to the mother and baby of not taking the psychotropic drug outweigh the risks to the fetus from taking the drug or switching to a safer medication. Consider these statistics: 15% of pregnant women with untreated depression attempt suicide. Those who stop taking antidepressants during pregnancy are 5 times more likely to have a relapse in depression than women who continue taking these drugs during pregnancy. The ACOG guidelines say untreated or inadequately treated maternal psychiatric illness can lead to poor prenatal care, inadequate nutrition, increased use of alcohol and tobacco, reliance on other medications or herbal supplements, and poor mother-infant bonding. “With antidepressants, we recommend you get on an antidepressant that works for you,” says Wolfe.

A large, long-term study found antidepressant use during pregnancy associated with increased rates of preterm birth, a growing problem in pregnancies in the United States. In general, all antidepressants pose a small withdrawal risk for babies at birth, which may include, but are not limited to, jitteriness, irritability, tremors, difficulty eating or sleeping, and some problems with breathing. If possible, avoid taking antidepressants near the time of delivery to limit neonatal withdrawal symptoms.

Selective serotonin reuptake inhibitors (SSRIs) are the antidepressant class most often prescribed for pregnant women, with sertraline (Zoloft) and fluoxetine (Prozac) 2 of the most common SSRIs prescribed during pregnancy (they’re also the drugs most studied). Though both are listed as Class C drugs, neither has been found to have an increased risk of birth defects above baseline for the general population. In the SSRI class, pregnant women should never take paroxetine (Paxil), listed as a Class D drug by the FDA, because it has been shown to have a 1.5% to 2% increased risk above baseline in fetal cardiac malformations in human studies.

Other antidepressants to avoid if possible — and absolutely during the first trimester because of their risk of birth defects — include those containing lithium, valproate/valporic acid, carbamazepine or certain benzodiazepines.

Supplements aren’t necessarily a safer option. Not enough is known to determine the safety of SAMe, a popular supplement for depression. 5 Hydroxy-Tryptophan, a.k.a., 5-HTP, may be unsafe if taken during pregnancy or breastfeeding. St. John’s Wort has been found to cause birth defects in unborn rats, and has been shown to cause colic, drowsiness and listlessness in breastfed infants whose mothers take it.