What Actually Works in Fighting a Cold or Flu? 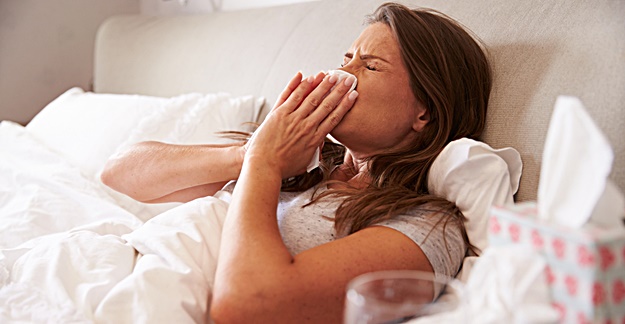 My mother had a strict rule when I was a child. If 1 of her 4 kids was sick enough to stay home from school, we got bed rest and no TV. Staring at the ceiling all morning was enough to get most of us back to school by lunch time.

This is why I knew I was very sick last week. For the first time in several years, I had an upper respiratory infection — a nasty cold or maybe the flu. I spent most of a day and a half wandering vaguely from couch to bed, coughing spasmodically, feeling very dull. I didn’t even feel like turning on the TV.

By the third day, I’d finished up my cough lozenges that were sticky with old age and expired DayQuil (which upset my stomach and made me confused). I wanted relief from my cough and stuffy nose.

I stood in front of the cold and flu aisle of the local pharmacy feeling overwhelmed with my choices. I looked longingly at the pharmacy counter, but there were already 4 people waiting to ask the pharmacist questions. I pulled a couple of bottles, a bag of lozenges and a pack of Mucinex off the shelf. After taking a bunch of meds, I fired up my computer. What, I asked Google, is the most effective treatment for loosening my cough, relieving my congestion and easing my exhaustion?

The difference between a cold and the flu is minor for most people. The symptoms are much the same and in both cases you normally start to feel better after 3 days. A cold should be markedly better after a week, though the symptoms might linger. A flu will keep you down longer. Both a cold and a flu are viral but start from different viruses. The flu can turn into pneumonia, particularly in elderly, pregnant or others with compromised immune systems. Pneumonia can be either viral or bacteria based, and a doctor needs to diagnose that difference.

I didn’t have enough concentration to read through hundreds of clinical trials, so I went to my favorite authority, Cochrane Reports. Their researchers review all published research on a particular topic and summarize it. Here’s my summary of their summaries: OTC (over-the-counter) medicines work somewhat, but the side effects are common and can be unpleasant. Antibiotics don’t work on colds and flu. Your best bet? Vapor, nasal irrigation, a spoonful of honey and plenty of liquids.

Here are the Cochrane Reviews I depended upon:

OTC combination drugs (antihistamine, decongestant, analgesic) have a “general benefit” in adults and older children, but the side effects can outweigh the relief. The combination of an antihistamine and decongestant was the most effective of the various options. They also found that many people on OTC cold and flu meds “experience adverse effects such as drowsiness, dry mouth, insomnia and dizziness” based on 27 studies with a total of 5,000 patients.

Importantly, the reviewers found, “There is no evidence for a beneficial effect in young children.” While I don’t have any young children, I clicked over to the AAP (American Academy of Pediatrics). For children, the AAP recommends: “Acetaminophen or ibuprofen can reduce aches and pains and a cool mist vaporizer can help loosen congestion. A simple bulb syringe and saline nasal spray can be used to clear stuffy noses. Plenty of liquids, especially chicken soup, and rest also help children feel better. But don’t underestimate the power of TLC. Your caring and comfort is one of the best medicines for your child.”

Cough medicines don’t have any good quality studies. One study did compare expectorants to honey: Honey won. Expectorants thin out mucus so that it can drain more easily. Examples: Guaifenesin, which is found in medicines such as Robitussin and Mucinex. Suppressants, well, reduce the frequency of coughs using dextromethorphan (DM), found in Delsym and Vicks Cough Suppressant.

The authors of the report noted: “There is no good evidence for or against the effectiveness of OTC medicines in acute cough. This should be taken into account when considering prescribing antihistamines and centrally active antitussive agents in children; drugs that are known to have the potential to cause serious harm.”

Illnesses and Whether or Not Antibiotics are Needed

Antibiotics (a commonly prescribed one is azithromycin also known as a “z-pack”) have been proven many times to be ineffective in shortening the life of a cold or the flu (both viral infections) and antibiotics are only effective against bacterial infections. Between one-third and one-half of all prescriptions for antibiotics are unnecessary or inappropriate. For those doctors who prescribe antibiotics because of patient pressure to do something, stop.

Both the cold and flu attack the immune system and occasionally they can open the door to bacterial infections. If a cold has gone on longer than a week with no improvement, that might be a sign that a bacterial infection is setting in. But you need a doctor’s exam to confirm. And, no, thick, green disgusting mucus is not an indication that you need an antibiotic.

Like everyone else, I was hoping that there was a way to avoid the symptoms even if the cold couldn’t be cured. While I didn’t accomplish that, I did prove my mother’s hypothesis that no TV watching should happen while sick. I finally did turn on the TV and the worst side effect of the cold was that I watched the entire first season of Keeping Up the Kardashians. Sorry mom!