Yes, this had been another “worst ever” allergy season. Maybe you heard of the “Pollmaggedon” of North Carolina? It’s all about climate change driving pollen counts. The more carbon dioxide in the atmosphere, the more pollen is produced. Any particular year’s weather can impact pollen production, too: a colder start to spring delays production and leads to a milder allergy season, but if spring comes on warm and fast, the air will be flooded with a “super bloom” of pent-up pollen, leading to more acute allergic misery for many.

One positive development is that allergy sufferers may have some new weapons in their arsenal. Specifically, immunotherapy, whereby you get tiny doses of allergens that help you build immunity.
While the idea isn’t new, some immunotherapy drugs are fresh to the market and show promise in helping the millions of people suffering with seasonal sneezing, runny noses, itchy, watery eyes, and post-nasal drip.

Allergy Treatments and Their Side Effects

Allergic rhinitis (hay fever), which includes the seasonal allergies triggered by pollens, is widespread, affecting about 50 million people in the United States.

Finding effective relief is but one part of the allergy puzzle. You’ll also want to minimize any side-effect risks of the medicines you use, watch for possible drug interactions with other medications you take, and search out more natural methods of symptom control when necessary. Here are 5 ways to fight allergies this season.

1. Be smart about allergy drugs

Pharmaceutical options include over-the-counter and prescription pills, liquids, nasal sprays, and eye drops. A report by London-based market research firm visiongain estimated that the global market for allergic rhinitis drugs market would reach $11bn in 2015 – with no sign of slowing.

But allergy drugs aren’t without side effects. These include sedation from oral antihistamine pills and irritation from steroid nasal sprays, says Neeta Ogden, MD, fellow of the American College of Allergy, Asthma & Immunology, and an allergist in New York City and Hackensack, New Jersey. But it’s important to take medications as prescribed and follow dosing instructions carefully. Taking too much of a decongestant, for example, can cause rapid heartbeat and high blood pressure, posing a problem for those with heart conditions and hypertension. “Decongestants can also make you jittery and more awake, which can be dangerous for people with anxiety or insomnia,” Dr. Ogden adds. 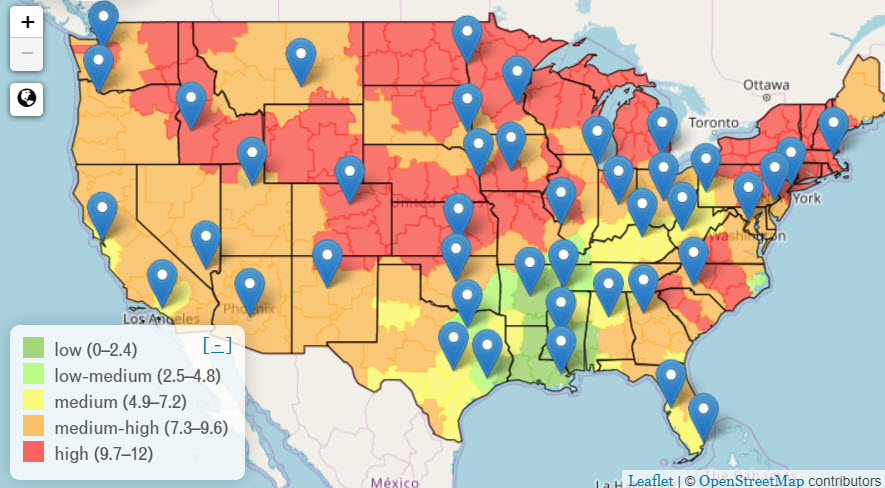 By contrast, antihistamines — particularly “first-generation” drugs, such as Benadryl (diphenhydramine), Chlor-Trimeton (chlorpheniramine maleate), and Tavist (clemastine) — may cause sedation and extra drowsiness if taken in excess. Be aware, too, that the active ingredient diphenhydramine may, if used regularly for a period of several years, cause up to a 54% increase in the likelihood of dementia or Alzheimer’s, according to a recent study and reported on our blog. Newer antihistamines — such as Zyrtec (cetirizine), Clarinex (desloratadine), Allegra (fexofenadine) and Claritin (loratadine) — cause less drowsiness, but still must be taken according to label directions.

Be cautious of multisymptom remedies that contain an antihistamine, a decongestant, and a pain reliever and fever reducer. For example, Tylenol Sinus Congestion and Pain caplets pair acetaminophen, to relieve headaches that often come with congestion, with the decongestant phenylephrine. Says Dr. Ogden, “Acetaminophen is metabolized by the liver and can cause liver problems if you take [too much of it]. I would be concerned if someone was just ‘popping an allergy pill’ every four hours.” The solution? Choose an allergy remedy that addresses only the symptoms you are experiencing and carefully follow dosing directions.

Two nasal-spray options, the corticosteroids fluticasone (Flonase) and triamcinolone (Nasocort), can be very effective at relieving the congestion and runny nose of allergies, and they’re available over the counter as of 2013 (Nasocort) and 2014 (Flonase).

Many common prescription drugs — such as those for diabetes and high cholesterol — have no negative interactions with allergy medicines, says Dr. Ogden. There are a few exceptions, however. “People taking the antibiotic erythromycin and those related to it, and those taking the antacid cimetidine [Tagamet] may need to be careful with the antihistamine loratadine [Claritin],” she cautions. “These drugs can affect the way the antihistamine is metabolized and lead to increased levels and side effects such as oversedation.”

Rather than treating allergy symptoms after they occur, immunotherapy introduces tiny doses of allergens into the body on purpose so that an immune system will adjust to their presence and not react so strongly. After receiving a shot, patients sometimes develop temporary side effects such as itchy eyes, a runny nose or other allergen-induced reactions.

Traditional immunotherapy involves shots once or twice a week for the first several months of therapy, and then less frequently — perhaps once a month — for the next several years. It’s a treatment that requires patience and effort, and the best candidates for it are people for whom allergy medicines have failed to provide relief.

There is a newer immunotherapy option, however: a pill. Three prescription oral-immunotherapy treatments — Oralair, Grastek and Ragwitek — were approved by the FDA in 2014. The pills, administered at first by an allergist, dissolve under the tongue. The method is called sublingual immunotherapy, or SLIT. After your first dose is taken in a doctor’s office, subsequent doses are taken daily, at home. Like immunotherapy shots, the pills must be taken for several months before they become fully effective. Oralair and Grastek both work to combat the effects of certain grass pollens, so they will not be effective against the weed pollens that cause symptoms later in the year. (Ragwitek addresses the effects of ragweed pollens, which proliferate in the fall.) In clinical trials, Oralair reduced symptoms by 16 to 30 percent, and Grastek reduced symptoms by almost 20 percent, among patients diagnosed with grass-pollen allergies. For both treatments, the main side effects included itchy mouth and throat irritation.

Immunotherapy pills have convenience on their side, but their effectiveness remains to be seen, says Dr. Ogden. “Traditional shots are extremely effective and have the benefit of treating allergies to multiple allergens [such as tree, grass, and weed pollens, as well as indoor allergens such as dust mites and pet dander].” While the safety profile for the new pills has been “excellent,” Dr. Ogden adds, “I am still concerned about allergic reactions [to the drug] at home. I think we have to be on the lookout for this — both by first administering the drug in the allergist’s office and then educating patients about what to look for at home.”

Although immunotherapy pills have not yet been compared head-to-head with immunotherapy injections, a recent report suggests that SLIT is very effective at reducing allergy and asthma symptoms.

What’s on your plate has a significant effect on allergies, including on how well allergy meds work for you, says says Vincent Pedre, MD, a board-certified internist and integrative physician in New York City, author of the upcoming book Happy Gut, and a former seasonal allergy sufferer himself. Nutrition is Dr. Pedre’s preferred approach to treating his allergies, in order to avoid possible drug side effects such as fatigue, sleepiness, and “feeling mentally slow,” he says. 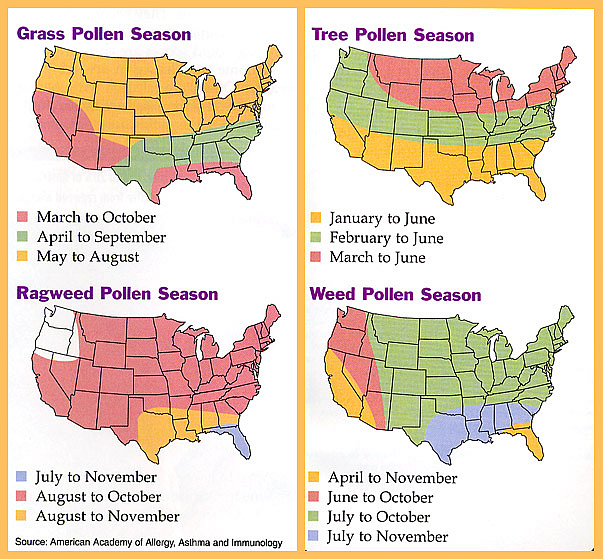 A dietary strategy against allergies might include subtracting some foods and nutrients and adding or increasing others. Eliminating or reducing foods such as wheat, dairy and sugar can make a difference, Dr. Pedre says. “We change the diet — a lot of times taking out dairy, for example — and spring allergy symptoms become pretty much nonexistent,” he observes. “There can be a huge improvement with the right dietary changes.”

Although there are no studies to support its effectiveness, locally sourced honey — a teaspoon per day, taken for a couple of months before allergy season begins — is theoretically a natural form of immunotherapy, Dr. Pedre adds. The idea is that it delivers a small dose of pollens from the local area, the same ones that would trigger an allergic response if your body were not accustomed to them.

Acupuncture and Chinese herbs, along with or in lieu of pharmaceuticals, can be effective in treating seasonal allergies. Jeffrey Weidmann, a licensed acupuncturist and certified herbologist at Slope Wellness, in Brooklyn, New York, reports that patients seeking allergy relief currently comprise about 20 percent of his practice, a figure he expects to rise to 30 percent when allergy season peaks. “Acupuncture and herbs can control symptoms in most people,” he says, “and in some, symptoms go away completely, sometimes for years at a time.”

Most patients get relief using acupuncture (often in combination with herbs) as their sole method of treatment, Weidmann says. Others are able to reduce the amount of allergy medication they take, using it on an as-needed basis. When prescribing herbs, Weidmann tells patients to watch for digestive upset, which might call for reducing the dosage of herbs; and to contact him immediately if they get a skin rash or outbreak that could signal an allergy to something in the herbal formula. “Most of the Chinese herbs we use for allergies don’t have interactions with medications,” he says. “But they are contraindicated if you’re taking immunosuppressive drugs,” like the ones used to treat the autoimmune disorders lupus and rheumatoid arthritis. “That’s because the herbs boost the immune system.”

Weidmann recommends starting treatment in early March, about one month before allergy season begins, although results can still be achieved after symptoms kick in. The trick is to be consistent. As Weidmann points out, “the effects of acupuncture are cumulative — they get stronger and last longer with subsequent treatments.” In general, Weidmann recommends one session a week for four to six weeks. If symptoms haven’t subsided, he suggests a patient come in every two weeks or once a month for the remainder of the allergy season.

On another note, some allergy sufferers find that rinsing their nasal passages using a neti pot and mild saline solution brings relief. Allergy sufferer Tania Sanchez tried a variety of drugs, with no luck. Claritin and Zyrtec plunged her into a mild to moderate depression (an uncommon side effect of both drugs). Allegra “offered no side effects but not much effect either,” she recalls. So now Sanchez rinses her sinuses with a neti pot daily, a routine she credits with helping her survive last year’s intense allergy season. If you’re using a neti pot, always use distilled or filtered water to avoid nasal infections. Be sure to thoroughly clean your pot so that bacteria and fungi don’t form on the spout, leading to chronic irritation or allergies.

Apart from choosing and using the treatments that work best for you, you can help control seasonal allergy symptoms by minimizing your exposure to pollens. During allergy season, try to keep windows and doors closed as much as possible, and run the air conditioner, making sure to clean the filter often. Shower and wash your hair at least once daily to rinse away any pollens you’ve picked up while outdoors, and change your clothes as soon as you come home. Keep pets well-groomed, too, especially if they go outside. Finally, keep the surfaces in your home as clean as possible with regular dusting and mopping. Simple lifestyle changes like these can make a big difference.
This article is an update of an article originally published May 8, 2014 and updated on March 19, 2015

Is Rinsing Your Sinuses Safe? (FDA)

Nancy Arnott is a New York City-based writer and editor who has specialized in health topics for more than 20 years.

Xeljanz, Acupuncture for Angina and Aspirin

Just when you thought you’d aged out of having to decide about HPV vaccination, more options are back for those up to 45 years old. Politics are driving a misinformation campaign on the so-called abortion reversal drug and risking women’s lives. What to do about declining semen quality in men?…

Two ways to avoid using drugs in the New Year: Lowering high blood pressure is a family affair and a nerve stimulator relieves the pain of IBS. Plus a bonus — 21 drugs that increase the risk of falls and subsequent hip fractures in seniors. Check the list! Hypertension, Blood…