A Short History of Accutane 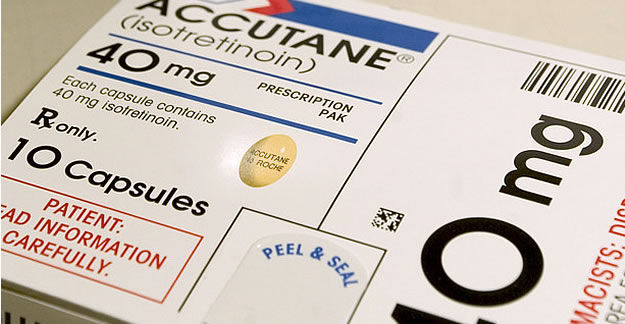 Accutane, a severe acne medication, has a past deeply scarred by reports, medical studies and lawsuits citing links to serious side effects including death

While the intended use of Accutane was to clear the skin of severe acne — and it has been proven to do so — its past is deeply scarred by reports, medical studies and lawsuits citing links to serious side effects including death.

While Accutane itself has gone off the market, there are currently generics with the same acitive ingredient — isotretinoin — available. On the plus side, tracking and prevention of side effects is much improved.

Here is a brief history of Accutane, from the time it was approved in 1982 to the present day.

The FDA approves Hoffmann-La Roche’s Accutane (isotretinoin), a prescription medication for use in treating severe acne that is unresponsive to conventional therapies.

The FDA requires a “black box” warning for Accutane, citing the risk for fetal deformity.

Several medical studies cite a possible link between depression and Accutane use. The FDA issues a warning to physicians, and Accutane warning labels in the US are updated to include a possible risk of adverse psychiatric effects, including depression, psychosis, suicidal ideation and suicide.

The FDA mandates the implementation of the Accutane Pregnancy Prevention Program (pdf).

The FDA and Accutane manufacturer Hoffmann-La Roche agree to link a negative pregnancy test with each monthly prescription of Accutane.

A Medication Guide is approved to provide more plain language information about Accutane’s side effects. It is to be distributed by pharmacists to Accutane patients. The FDA also establishes an online Accutane Drug Information web page.

Hoffmann-La Roche approves the use of the SMART (System to Manage Accutane Related Teratogenicity) program for pregnancy prevention. Key elements include patient-informed consent, pregnancy testing and contraception use.

The FDA becomes aware through the Adverse Event Reporting System of 173 reports of suicide associated with Accutane treatment worldwide. The FDA requires Hoffmann-La Roche to begin submitting quarterly summaries of side effects. By August 2002, the summaries include roughly 6,000 additional reports of psychiatric adverse events, such as depression and suicidal thoughts.

The FDA begins to collaborate with the National Institute of Mental Health to address the need for more independent research and holds a workshop to discuss basic scientific research into the effects of retinoids on the central nervous system.

Hoffmann-La Roche starts including a Medication Guide in the Accutane blister pack. The guide will later become part of the iPLEDGE program.

In the first 20 years of Accutane use, the FDA Adverse Event Reporting System contains almost 23,000 reports for Accutane, mostly from the US. The 5 most frequent reactions are alopecia (hair loss), depression, headache, dry skin and induced abortion to purposely end a pregnancy conceived while taking Accutane.

Generic isotretinoin versions of Amnesteem, Sotret and Claravis each propose a separate pregnancy-risk program to avoid pregnancy while taking the drug.

Hoffmann-La Roche and other isotretinoin drug manufacturers agree to work together on the need for a single pregnancy prevention program.

The FDA Joint Advisory Committee recommends a single, required, stronger risk management plan for all marketed isotretinoin products. The plan links isotretinoin prescriptions with pregnancy testing to reduce the chance of a pregnancy during treatment.

The FDA issues an alert for Accutane and all generic isotretinoin, advising doctors to monitor patients for suicidal thoughts or actions.

In March, iPLEDGE pharmacies are required to obtain iPLEDGE system authorization before filling an Accutane or isotretinoin prescription. (Both patients and prescribers must prove they are registered with iPLEDGE.) Women of childbearing age are required to provide their doctors with a current negative pregnancy test result each month before receiving a prescription.

The first case alleging that Accutane causes inflammatory bowel disease (IBD) results in a $2.6 million award. In October, a jury awards another plaintiff $7 million for a case involving IBD.

A New Jersey Superior Court jury awards $10.5 million in a case, one of 425 against Hoffmann-La Roche, alleging the drug causes IBD. (The judgment will be reversed in 2010.)

The American Academy of Dermatology (AAD) issues an updated position statement (pdf) on the use of isotretinoin. It claims that, according to published scientific studies, there is no direct causal relationship between isotretinoin and IBD and psychiatric disturbances. The AAD calls for the need for patient monitoring and more scientific testing on the topic.

In February, a jury awards Andrew McCarrell $25 million, the largest Accutane award to date. McCarrell claims he developed IBD years after taking Accutane. (This judgment will be upheld in 2011.)

In June, a New Jersey Superior Court orders Hoffmann-La Roche to pay $18 million in compensatory damages to 2 Accutane users who developed ulcerative colitis. The court found in Hoffmann-La Roche’s favor in 2 other cases.

Hoffmann-La Roche wins a reversal of a $2 million Accutane trial verdict. A former Accutane user had blamed the drug for her IBD — a condition she had years prior to taking Accutane.

Hoffmann-La Roche continues to sell isotretinoin under the name Roaccutane in other countries. Other governments are still reviewing claims of psychiatric adverse events including suicide linked to Roaccutane use.

A New Jersey appeals court reversed Andrew McCarrell’s $25.2 million jury verdict against Roche (see above), ruling that McCarrell waited too long to bring the case. McCarrell will appeal, according to one of his lawyers.

Naomi Mannino is a Tampa, Florida-based freelance journalist who reports on health and medical news, research and technology. Follow Naomi on Twitter @naomimannino.