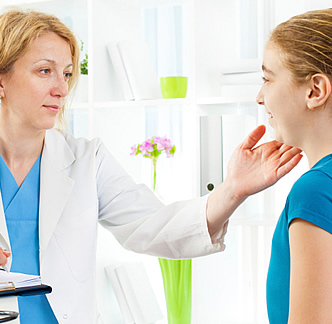 All are reasonable options but include risks that may not be apparent. Both pediatricians and dermatologists are seeing patients as young as 7 years old, according to an article in the New York Times. There are many possible reasons that acne is starting early, including the possibility that it is not starting early — we parents are more aware of the signs and are more pro-active about doing something about it. After all, when most of us were kids there wasn’t much you could do about acne except clean your skin and use Clearasil. Now there are options such as Retin A and Differin, or using antibiotics (OK, I’m not that old. They had antibiotics when I was a kid).

Here’s the concern: Virtually none of these products have been tested on children under the age of 12. Most of the drugs aren’t even FDA approved for acne — doctors prescribe them “off label.” Antibiotics should be given sparingly to children because they could develop a resistance to them. Antibiotics are powerful drugs and useful in many ways. It would be a significant loss in access to important medical care to become resistant to antibiotics. Side effects from antibiotics often center on the digestive system and include nausea and vomiting.

For many years, Accutane was given to adolescents, primarily girls, to treat acne but Accutane was found to cause miscarriages and birth defects in pregnant women who use the drug, and the FDA restricted it in 1988.  Pregnancy is not a concern with a 7-year-old, but clearly this is a powerful drug. Common side effects include diminished night vision, increased injuries due to thickened or weakened bones, increased reaction to UV exposure, red, cracked or sore lips, nosebleeds, changes in nails, peeling skin, unusual hair growth or loss, bleeding or swollen gums, fatigue, voice changes and more.

Benefit: Drugs can clear up most acne.

Risk: Most all of the drugs haven’t been tested on children, so you don’t know the risk. The known side effects are minor and include stinging, redness, scaling of the skin. However, I have to point out the side effect of thickened or weakened bones with Accutane. That has to be a huge concern regarding a child with growing bones.

A severe allergic reaction should also be watched for with Accutane, Retin A and Differin, but is rare.

Question: How bad is the acne? Is it bothering you or your child? Might it scar? Might your child be teased and end up with emotional scarring?

These are questions only you can answer on behalf of your son or daughter.