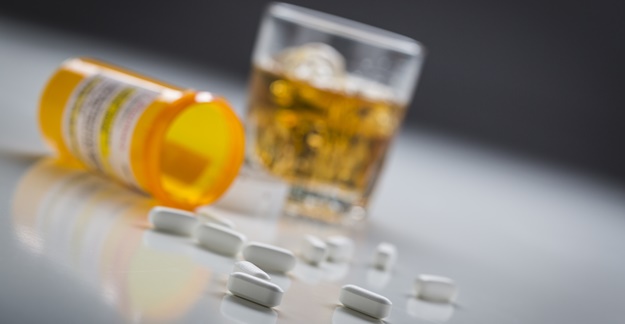 Alcohol has strong associations with fun and relaxation, but it’s just another drug as far as your body is concerned. The side effects of medicines can be increased when you have even one drink. Beer, wine or hard liquor, combined with other drugs, can create dangerous, even life-threatening, interactions that include internal bleeding, heart problems and difficulty breathing.

Prescription drugs, OTC drugs and even herbal remedies can trigger dangerous side effects. The National Institute on Alcohol Abuse and Alcoholism (NIAAA) lists more than 100 common drugs (https://pubs.niaaa.nih.gov/publications/Medicine/medicine.htm) that, if taken with alcohol, can cause harm. These drugs include many that are prescribed for ADHD, high blood pressure and high cholesterol, not to mention OTC treatments such as ibuprofen, naproxen and acetaminophen. Combining these with even small amounts of alcohol can result in adverse events ranging from drowsiness and upset stomach to liver damage and death.

Alcohol Slows the Body Down

That relaxing glass of wine or after work beer with friends contains ethanol (ethyl alcohol), a psychoactive chemical that depresses the central nervous system and can interfere with sensory input (what we see and hear,) emotions, inhibitions and movement.

“Pharmacologically, alcohol is a sedative hypnotic — it slows you down,” says NIAAA (National Association of Alcohol Abuse and Alcoholism) Director George Koob, PhD.

Mixing alcohol and drugs can produce two types of reactions. In the first, alcohol intensifies the effect of the drug, or vice versa. In the second, the drug-alcohol interaction can affect how a drug or alcohol moves through the body.

Here are six drug and drug classes you should especially avoid mixing with alcohol:

How Alcohol Intensifies Side Effects of Other Drugs

Taken with another sedative hypnotic — such as an opioid, barbiturates like Amytal, or tranquilizers like Valium — alcohol interacts in a “synergistic” way. That is, the total effect is greater than the sum of the individual effects of each drug.

“In this case, two plus two equals five,” says Koob.

With a drug like Valium, which can inhibit respiratory function, the synergistic effect can be fatal. One tragic case that made headlines involved Karen Ann Quinlan, who in 1975, while taking Valium (diazepam), drank alcohol at a party and later, at home in bed, stopped breathing long enough to suffer extensive brain damage. Her parents went to court to gain permission to take her off a respirator and allow her to die, but Quinlan lived in a vegetative state for an additional nine years.

With some drugs, drinking means a person will get much more intoxicated than they would using  alcohol alone. That’s because many medications contain alcohol or act like alcohol. For example, the antihistamine Benadryl (diphenhydramine) is a central nervous system depressant, like alcohol. An individual who can ordinarily take Benadryl without experiencing its common side effect of drowsiness, may find it difficult to fight off sleep if they take the allergy medicine while drinking alcohol.

These interactions can lead to people unwittingly engaging in risky behavior, like driving when they are in no shape to do so. Or, an interaction can simply “push the effect of the drug into the toxic range,” Rosenberg says.

Koob says those drugs that act on brain function are the most likely to interact in dangerous ways with alcohol, but quite a few other common drug types have risks, too. Tylenol (acetaminophen) and alcohol in tandem can be toxic to the liver, for example.

Some herbal products when mixed with alcohol can cause liver damage — black cohosh, kava, Saw palmetto and valerian for example.

Some herbs cause sleepiness when used in combination with alcohol – chamomile, echinacea, kava, St. John’s wort, 5-HTP and more.

High levels of Vitamins A, D, E and K can lead to liver damage when alcohol is consumed.

“With a lot of drugs, these interactions can be lethal. That’s certainly true for the opioids,” Koob says. Conservatively, about 15% of deaths involving opioids today are actually alcohol-drug interactions, he says.

Emergency medicine doctor Mark Rosenberg, DO, Emergency Medicine at St. Joseph’s Healthcare System in Paterson, NJ, says patients with alcohol-opioid interactions in the ER is commonplace. “We see it every night. Opioids cause respiratory depression, which alcohol accentuates. The combined effect is what causes the death.”

Booze Can Keep Drugs in Your Body Longer

Mixing alcohol with medicine can keep both in your body longer or change the way your body reacts to each. An example of a pharmacokinetic interaction is when blood rushes to your face, neck and chest to create “flushing” (like blushing).  It can occur when some people take even a little alcohol with Diabinese (chlorpropamide), a sulfonylurea drug for type 2 diabetes, or some antibiotics, including Flagyl (metronidazole). Flushing is associated with potentially dangerous dilation of blood vessels, low blood pressure and rapid heartbeat.

Who is Most at Risk?

Anyone who takes medication and drinks could be at risk for dangerous alcohol-drug interactions, however the following groups have a heightened risk.

Alcohol affects women more than men because women’s bodies tend to have less water than men’s. “There’s less water volume for the alcohol you take in to distribute itself over. It’s more concentrated,” Koob says.

Older people feel the effects of alcohol more, too. Their bodies metabolize alcohol more slowly, so not only are they likelier to feel the effect, but ethanol will stay in their systems longer. They’re also more likely to take more than one medication, which raises the risk of an interaction with alcohol, and to be injured if they fall during an intoxicated episode.

Those taking more than one drug have to be even more careful about taking a drink. “The more drugs you take, the higher your risk of an interaction,” says Rosenberg.

It’s wise to approach alcohol, even on its own, with a great deal of respect. Excessive alcohol consumption is the third-highest preventable cause of death (behind smoking and obesity) in our society, killing an estimated 88,000 Americans every year. Having even one drink while on certain meds can be too much. Be sure to ask your physician or pharmacist about how any treatments you’ve been prescribed might interact with alcohol.