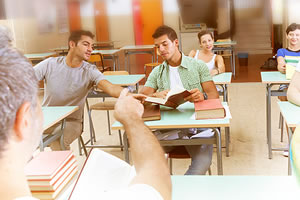 What’s the harm in using ADHD drugs to get a little help studying? If you actually don’t have ADHD, these stimulants can lead to nausea, headaches, high blood pressure, arrhythmia and other side effects, as I learned by reading Teresa Bergen’s great article ‘Smart Drugs’ on Campus: Too Easy to Get & Abuse. She explores the growing phenomenon of college students taking illegal prescription drugs — stimulants mostly — in order to focus more clearly and improve their grades.

I wondered whether the kids who do have ADHD and are taking stimulants have the same risks for nausea, psychosis and heart problems as the non-ADHD students.

See Also: ‘Smart Drugs’ on Campus: Too Easy to Get & Abuse

“Probably not” is the opinion of Kimberly Urban, a postdoctoral research fellow at Children’s Hospital in Philadelphia; her PhD is in neuroscience. Bergen interviewed her for the article and I called her to ask about risks for kids with ADHD. Nobody has studied the long-term risks of Ritalin on the ADHD brain directly. Because of that Urban says, “the short answer is we don’t know.” However, having studied the effect of stimulants on people who do not have ADHD, she believes that these side-effect risks should not be there for those with ADHD.

Here’s why: “The fundamental difference in ADHD brains is that the neurotransmitters are low, especially dopamine and norepinephrine which regulate mood and behavior,” Urban explains. Ritalin increases these levels to normal.

Then what happens to a non-ADHD brain on Ritalin? “The ability to shift attention from one topic to another is impaired, which gives the impression of a higher level of attention,” Urban explains. It doesn’t actually make you smarter and, anecdotally, according to Urban, it blocks the ability to be creative. (Read more about that in ‘Smart Drugs’ on Campus: Too Easy to Get & Abuse.)

Try to convince college students that ADHD drugs don’t work and you may be wasting your time. Bergen found that many students tweet and talk about needing Ritalin, Adderall, etc., just to level the playing field. They actually fear not being able to get through school without stimulants.

Should there be a campus awareness campaign for the misuse of ADHD drugs, one that notes the downsides of using them, particularly for those who do not have ADHD? Probably. Will it work? That’s a tough question to answer. What might work better is if we all collaborate on creating a society that is less focused on high grades and more focused on enabling each person to maximize their strengths and talents for a healthier society.