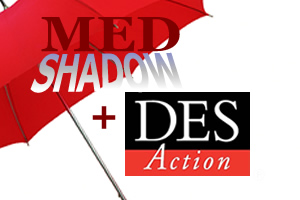 Diethylstilbestrol (DES) was the first synthetic estrogen and the first endocrine disruptor. It was prescribed from 1948 until 1971 (somewhat longer in cases). DES was given to women in pregnancy based on an inadequately tested theory that increasing estrogen levels in the body would prevent miscarriages and premature labor.

DES prevented neither, however, and in fact, actually increased these risks.

Because of its ability to disrupt the endocrine system, DES also turned out to be the suspected cause in an alarming number of cancers — doctors began seeing clear cell adenocarcinoma of the vagina and cervix, a rare form of cancer, in very young women, and connected the rise in this type of cancer to the women’s shared history of their mothers being prescribed DES during their pregnancies. DES’s ability as an endocrine disruptor to change the functions of genes has carried into the 3rd generation, the grandchildren of the women given DES by their doctors. Do all endocrine disruptors have such long-term effects?

It was brilliant of DES Action, a grassroots organization assembled in the 1970s, to lobby for and work with researchers to find answers to health questions of the DES-exposed and — now — for the health of all endocrine disruptor-exposed, which is all of us.

MedShadow Foundation Inc., the parent organization of MedShadow, LLC, is thrilled to announce that we are now managing DES Action. It will continue to run as a separate organization with members, and continue its mission to identify, educate, empower and advocate for DES-exposed people. DES Action is the leading source of information on DES in the US. If you, your mother, your father or your grandmother was given or exposed to DES, get the health information you need at DESAction.org.

How do endocrine disruptors work and how can they still be affecting a person 50+ years later — and even damage the following generation? The endocrine system makes, stores and releases hormones needed for your body to function properly. Endocrine disruptors such as DES alter the way those hormones are regulated and also affect gene expression, meaning that some processes in the body that should remain off are activated and some that should remain on (such as ones that help the body fight cancer) are switched off.

The FDA approved the use of DES in pregnancy in 1948 and urged doctors to stop prescribing it to pregnant women in 1971, a span of 53 years. (View a full timeline) The FDA did not ban DES, but only urged doctors to stop prescribing it for their pregnant patients. Most, but not all, stopped, meaning sadly, DES was prescribed to pregnant women in America into the early 1980s, and later internationally.

An estimated 5 million women were prescribed DES. The pregnant women given DES had a 30% higher chance of breast cancers over their lifetimes.

An estimated 5 million children were born after being exposed to DES in utero. Each new decade has brought a new, unwelcome long-term effect of DES. Girls in their teens were found to have a high rate of a rare cancer, and in their 20s, they were diagnosed with multiple fertility issues. In their 40s, suddenly a pattern of early menopause developed and then a spike in breast cancer between the ages of 40 and 50 years old. Studies of DES daughters in their 50s and older are uncovering higher incidences of strokes, osteoporosis, diabetes, depression and more.

DES sons suffered significant effects too — small and undescended testes, small penis, and high penile infection rates. There were a significant number of cancers and fertility issues. And as they age into their 50s and beyond DES sons share the unusually high rates of strokes, osteoporosis, diabetes, depression and more.

DES effects have already carried through to the next generation. The DES grandchildren appear to show higher incidences of delayed menstruation for the girls, hypospadias for the boys (a condition in which the opening of the urethra is on the underside of the penis rather than at the tip), and an unusually high tumor rate for both boys and girls.

What Is DES? (DES Action USA)

Med Given to Women 60 Years Ago Affects Granddaughters