Is Your Child on Multiple Meds? They May Be at Increased Risk for Adverse Events 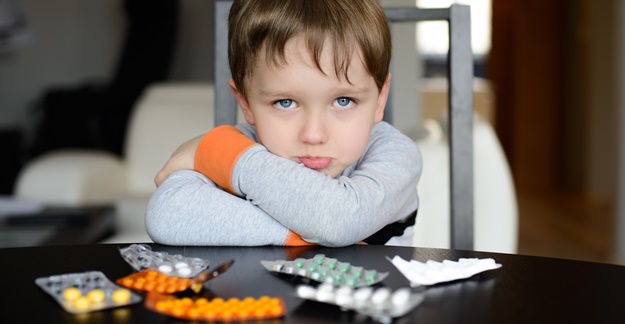 When we think of drug interactions and adverse effects, we worry more about adults — and particularly seniors — who are often on a cocktail of drugs. But new research shows that children and teens are also at risk for adverse effects – some quite serious – from being on multiple drugs.

The study, published in September in the journal Pediatrics, found that one in five children is on regular prescription medication, and one in twelve is potentially at risk for serious side effects from two or more drugs interacting with each other. In particular, teen girls have a higher risk than boys.

In many cases, this happens when a child is on a chronic long-term medication, such as an antidepressant, birth control or an ADHD (attention-deficit/hyperactivity disorder) stimulant. He or she falls ill and is given an antibiotic, a short-term medication. At that point, there is the potential for those two drugs to interact and cause adverse effects.

The Risks of Using Multiple Drugs in Children

About 200,000 children (age 17 and younger) go to the ER each year as a result of an adverse drug event, according to the CDC. What wasn’t known before was how many children and teens were on prescription drugs, and how many were taking two or more at the same time — called concurrent use — and the risk from drug-to-drug interaction.

The researchers found that boys age six to 12 years old had the highest use of concurrent prescription drugs at 12%, followed by teen boys and girls at 10%.

Significantly, the risk of drug-to-drug interactions for teen girls on antidepressants was much higher at 18%, than for boys at almost 7%, because more teen girls were given antibiotics for infections.

The most common side effect seen with drug-drug interactions in the study was abnormal heart rhythm, with a risk of its leading to sudden death. It also found that the most commonly used combinations of drugs were associated with effects such as suicidal tendencies or depressive symptoms. These combinations include taking an antidepressant with at least one other psychotropic medication or a birth control pill.

What Parents Need to Know

Over-the-counter (OTC) pain and fever medicines and antacids can also potentially interact with antidepressants and other chronic drugs, the study authors pointed out.

“Parents need to be aware of these adverse effects, which are not typical but could happen for many reasons,” said Dima Qato, PharmD, MPH, PhD, associate professor of pharmacy at the University of Illinois, Chicago, and lead study author. “They need to be aware of the drugs that can cause it, which are not limited to prescription medicines, but can also be [OTC] analgesics and acid reflux drugs used to treat heartburn.”

If children see more than one doctor and they’re given different prescription drugs by different providers, parents need to inform their physicians and pharmacists about all drugs they’re on.

Sudden cardiac deaths are under-reported in children, but are more common among those who are athletes, have asthma or are on antidepressants.

“It’s a concern that children are taking medications that expose them to higher risk,” Qato cautioned. “We may not know, as physicians, pharmacists and school nurses, that this could happen.”

“The study brings up some really good points,” said Siyi Yung, MD, a pediatrician and attending physician at the University of California, Los Angeles Mattel Children’s Hospital. “It shows how many kids are at risk for drug interactions. It’s definitely a problem, even if it’s not as prevalent as in elderly people. We need to be aware of it because of how often children go to the emergency room for adverse effects.”

But she cautioned that the study looked at potential interactions, not actual events that took place and were reported. These potential adverse effects are not common, but could happen.

“The potential is high, but in pediatrics, when we prescribe for a chronic period of time, we usually follow them very closely, especially if it’s an antidepressant, via phone or in-person,” Yung said. “When patients are already on chronic medication, and we are the ones prescribing an antibiotic, that is when it gets trickier.”

When an outside prescriber such as a psychiatrist writes up a prescription for an antidepressant, and communication between the doctor, the parents and the pediatrician is not clear, this can lead to gaps in knowledge which can complicate things, especially when the child is put on two or more drugs. Intake forms at clinics and hospitals always ask about current medications, but patients and caregivers can slip up and forget to list them all.

“Someone could come in for a urinary tract infection, forget to tell the doctor they’re also on antidepressants, and get antibiotics for their UTI, which could lead to a drug interaction,” Yung explained. “For many patients, their parents give us an oral report, but often can’t remember the name of the medicine, its potency, etc.”

Part of the problem also lies with unnecessary prescriptions for antibiotics, which Yung said are often doled out when children are brought to the ER or urgent care, and seen by unfamiliar doctors. Antibiotics are only effective for bacteria-based infections. More than 60,000 children end up at the ER as a result of an adverse drug event from an antibiotic each year, according to the CDC.

“I think it drives home the need to improve our healthcare system so patients are not forced to go to the ER when they could be served by their normal clinic or primary care provider,” Yung said.

Similarly, for ADHD, when a parent raises concerns, there may be an explanation for a child’s behavior when physicians investigate, and maybe even contact the teachers, before prescribing drugs.

Parents also often start a child on OTC medicines without being aware of how they might interact with the chronic drugs the child is on, so it’s important to ask the doctor what medicines and supplements (including vitamins) should be avoided every time you meet with the doctor about the chronic drug, she said.