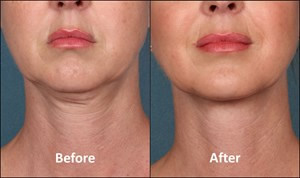 In the happy roar of chin-fat haters (you know who you are) over the approval of Kybella, a deoxycholic acid that “melts” fat from under the chin, the issue of side effects and potential abuse are drowned out. Did anyone notice that the only candidates for this procedure are a “highly selected” few that have fat with no sagging. (Fat that doesn’t sag with gravity?) But now that it’s approved, will plastic surgeons have the self-discipline to limit the procedure to just those who fit the profile? Or to limit the use to only chin fat? The trials show that the chin is the only place Kybella is proven or even likely to work because the chin is such a small area and a lot of the drug is needed to be effective.

Patients with appropriate chin fat were subjected to approximately 50 needle injections in each of 6 sessions during the trials. Can you imagine how many needles and sessions would be needed for my muffin top? Even the company who developed Kybella, Kythera Biopharmaceuticals, stated to the FDA Committee that they were not seeking approval for other areas of the body.

Products claiming to melt fat, often called “lipodisolve,” have been available for many years and are so common that the FDA prepared warnings against them which can still be found on the FDA website:

False and misleading claims are being made about lipodissolve products. Learn the facts.

Those dangerous and untested products are still out there. To protect people from being injected with substituted (and unapproved) products, Kybella will be distributed with a hologram on the vial. The FDA warns, “Don’t use vials without the hologram.”

In 4 out of 100 patients Kybella caused nerve damage resulting in an uneven smile, facial muscle weakness and 2 in each 100 had difficulty swallowing. The likely cause was a shot of Kybella too close to a nerve. All of these incidences cleared up in under 10 months. In its quest to melt fat, Kybella can also destroy skin cells if administered too close to the skin. Yuck.

If you are thinking about using Kybella to get rid of your chin fat, make sure that you select a plastic or cosmetic surgeon who has been trained in the technique. And since the training of doctors won’t start until June, don’t plan on being able to get the FDA-approved treatment before then. Take your time and weigh the risks of cosmetic procedures just as you would with the medications you are prescribed. And remember, beauty is in the eye of the beholder.