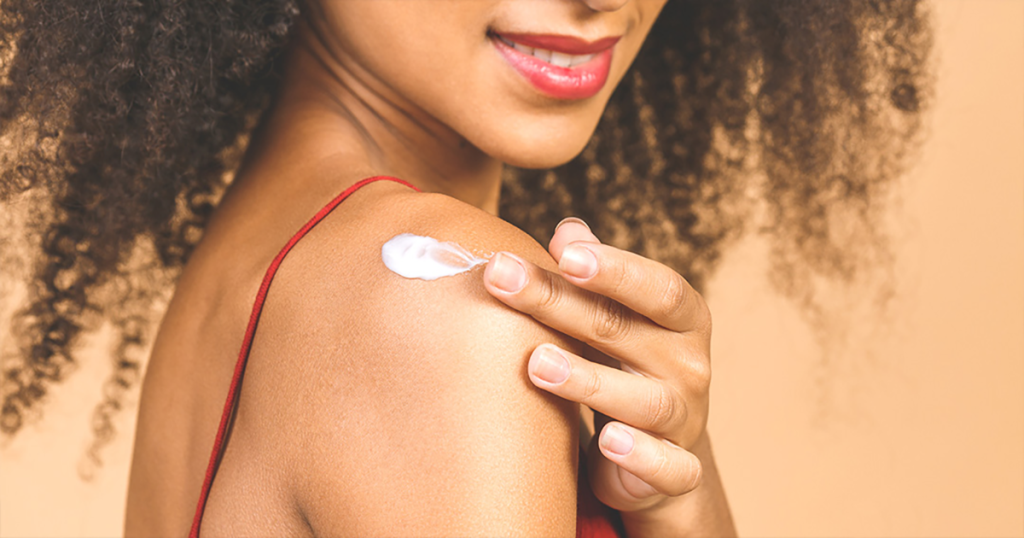 As we slather on sunscreen to emerge for the summer, some dermatologists and sunscreen users of color are taking to TikTok to point out that sunscreen doesn’t look the same on everyone. While sunscreens may be designed to be invisible or leave a very light white tint, when applied to dark skin, the lotions often leave dramatic white or even purple-looking casts that don’t disappear. “It’s like putting on the wrong color makeup,” says Adrienne Haughton, MD, a dermatologist at Stony Brook Medicine. “Someone with whiter skin won’t see the white cast as much.”

TikToker and skin-care chemist aprilbasi demonstrates the difference, by rubbing the same sunscreen on a brown arm and a lighter-colored one of an Asian person, below.

Which Sunscreens Leave a Cast on Dark Skin?

There are two main categories of sunscreens – those that create a physical barrier between UV rays and your skin, and those that create a chemical reaction to prevent skin damage from the sun. (Note: both sunscreens contain chemicals, the title “chemical sunscreen” refers to the fact that this sunscreen uses a chemical reaction to protect your skin from sunlight.) Chemical sunscreens are less likely to leave a cast because the chemicals themselves are absorbed into your skin. But physical sunscreens have gained popularity in recent years with a reputation for being safer for both human health and the environment.

Physical sunscreens, also called mineral sunscreens, are made with zinc oxide and titanium dioxide, which sit on the skin’s surface and reflect sunlight without being absorbed. They’re ideal for sensitive skin, anyone concerned about exposing their bodies to chemicals, and they don’t harm coral reefs, as the other type of sunscreen can.

Tiktoker dr.mamina explains some of the difference between chemical and physical sunscreens:

Unfortunately, because the minerals in these sunscreens aren’t absorbed, the minerals are also more likely to leave a white cast on your skin.

One way to avoid the white cast is to opt for a chemical sunscreen, especially one that is clear or can be sprayed on. These tend to be invisible on your skin, says Fayne Frey, MD, a dermatologist and founder of educational website FryFace.com, explaining that chemical sunscreens are usually invisible on the skin. But, she adds, there’s a drawback to them. “You’re much more likely to have a reaction to those,” she says, if you have a skin condition or extremely sensitive skin.

TikTok user habibatingz shares some of her favorite chemical sunscreens for dark skin:

Are There Mineral Sunscreens for People of Color?

Kemunto Mokaya, MD, a dermatologist in Houston suggests that if you want a physical sunscreen, you can try a tinted option, like the one demonstrated by TikToker ouimichelle, below. The tint comes from ferrous oxide or iron oxide, explains Beth Goldstein, MD, at Central Dermatology Center. “If it’s got some iron in it, it’s going to blend better,” she says.

Check out MedShadow.org tomorrow for an article that addresses everything you need to know about sunscreen, from the difference between UVA (ultraviolet A) and UVB (ultraviolet B) rays to which chemicals to avoid and what to use for dry, sensitive or acne-prone skin.