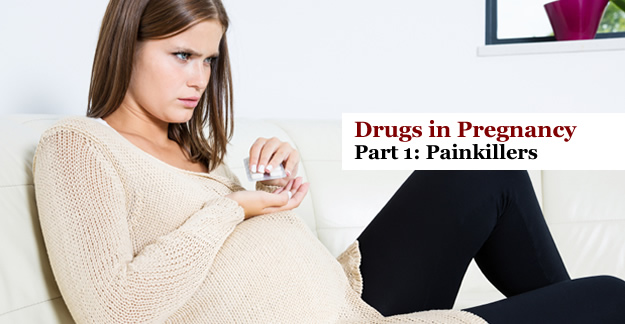 Between 2009 and 2011, more than 14% of pregnant women took prescribed narcotic painkillers, also known as opioids, for pain at some point during their pregnancy, according to a recent study by the American Society of Anesthesiologists (ASA). Doctors prescribed opioids for back pain, abdominal pain, migraine, joint pain, and fibromyalgia, with hydrocodone, codeine, oxycodone, and propoxyphene among those opioids most commonly prescribed. Lower doses of opioids might also be found in prescription cough medicines, so always read the label.

As in the general U.S. population, a major concern of taking any opioid is addiction and overdose. The number of pregnant women who abuse or are dependent on opioids jumped 127% in 14 years, leading to an increased risk of maternal death and stillbirth, according to a review by the ASA of more than 57 million American women admitted for delivery. In addition, the use of opioids was also associated with poor growth of the fetus, longer length of stay in the hospital, premature labor and cesarean delivery.

To date, there’s not any known increased risk for birth defects or learning problems associated with opioid use, says Lori Wolfe, a certified genetic counselor who advises women about the risks of medication use in pregnancy and while breastfeeding. (Wolfe is also the president of of MotherToBaby, a free, national informational service of the non-profit Organization of Teratology Information Specialists). “The concern for opioids is that the fetus will get dependent on them, the baby will get dependent on them, and the withdrawal can be quite significant for several weeks after delivery,” she says. She advises pregnant women taking narcotic painkillers to talk to their doctor about weaning off these drugs entirely.

Opioids have become a common prescription after cesarean delivery. However, it is often a woman’s first exposure to opioids and it is unknown if the opioid gets into breastmilk. Considering the now acknowledged high risk of addiction, a study tracking how much opioid was used when it was not offered automatically, but only of the patient complained of pain after using OTC drugs. Before the new policy 84% of post cesarean moms got opioids, after on 34% needed opioids for pain relief. And those moms in the non-opioid group were able to go home an average of half a day sooner.If you have a cesarean and are offered opioids, remember you can refuse them and, if you need them later, still get them.

The safety data with opioids and other pain killers continues to be a topic of discussion. A U.S. National Birth Defects Prevention Study (1997-2005) found associations between early pregnancy use of codeine and other opioids with birth defects, including atrial and ventricular septal defects, hypoplastic left heart syndrome, spina bifida, and gastroschisis in newborns. And yet, the FDA’s recent Drug Safety Communication on the use of pain medication during pregnancy reviewed and found limitations in the design of the studies on opioids, acetaminophen and NSAIDS. As a result, no new guidelines or restrictions were issued. The FDA continues to stress that pregnant women should consult with their doctor about taking any pain medication, and notes that untreated severe and persistent pain during pregnancy can result in depression, anxiety and high blood pressure for the mother.

For pain or fever, acetaminophen (Tylenol, Excedrin) remains the OTC drug of choice recommended by doctors, as they’re long studied and believed to be harmless to the developing fetus. Yet even for this go-to drug, a new long-term study of more than 64,000 children shines a light on acetaminophen’s possible long-term neurological risks. Children whose mothers used acetaminophen during pregnancy were at a 13% to 37% higher risk of later receiving a diagnosis of ADHD, being treated with ADHD medications or having ADHD-like behaviors at age 7. The associated risk was greatest the later into the pregnancy the women took acetaminophen.

Aspirin and nonsteroidal anti-inflammatory drugs (NSAIDs), such as ibuprofen (Advil or Motrin) or naproxen (Aleve), should be avoided, says Wolfe, because they can cause the mother’s blood to thin and prevent clotting, a risk near the time of delivery.

Aspirin use has one important exception: The World Health Organization recommends low-dose aspirin (75mg/day) for the prevention and recurrence of pre-eclampsia for women at high risk of developing the condition.

Some women sail through pregnancy with hardly a complaint, but if you’re one of the many who have occasional aches and pains, treat yourself with kindness and care. Get a body pillow or sleep with a pillow between your knees to relieve pressure on your back that can cause back pain. (But be aware that back pain can also be a sign of a urinary tract infection, so check with your doctor if you have other symptoms, such as pain on urination.) Drink plenty of water, get some exercise daily (prenatal yoga, which can teach you good stretching and strengthening techniques and ease stress, is a good idea). Hot or cold packs can help ease headaches. You might also want to try saying “om”: In recent years, studies on meditation have shown it to be of benefit in managing chronic pain. And you might find a few minutes a day meditating is good practice for life with your new arrival.

Next up in our Drugs and Pregnancy series: Pregnancy Nausea: Safe, Effective Remedies