The Trouble With Sunscreen Chemicals 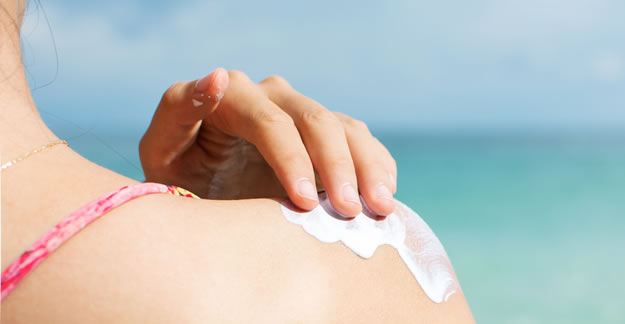 Sunscreen is a body care product that consumers are directed to apply a thick coat over large areas of the body and reapply frequently. Thus, ingredients in sunscreen should not be irritating or cause skin allergies, and should be able to withstand powerful UV radiation without losing their effectiveness or forming possibly harmful breakdown products. People might inhale ingredients in sunscreen sprays and ingest some of the ingredients they apply to their lips, so ingredients must not be harmful to lungs or internal organs.  Furthermore, sunscreens commonly include ingredients that act as “penetration enhancers” to help the product adhere to skin. As a result, many sunscreen chemicals are absorbed into the body and can be measured in blood, breast milk and urine samples.

For these reasons, the Food and Drug Administration is now proposing significant changes in how sunscreen ingredients are evaluated for safety. FDA is proposing that all current and potential new ingredients be adequately tested for safety, including with  studies to determine whether the ingredients penetrate the skin and can cause endocrine disruption, cancer or other health harms.

FDA has put the entire sunscreen industry on alert by proposing that in just two instances do we have enough safety information about ingredients to determine whether they’re safe and effective: zinc oxide and titanium dioxide. For 12 other ingredients, the FDA has said there isn’t enough data to determine whether they’re safe. In particular, FDA raised concerns about the substantial skin absorption of oxybenzone, its potential to affect hormone levels and the increased absorption susceptibility of children (FDA 2019). Lab studies shows that some chemical UV filters may mimic hormones, and physicians have reported sunscreen-related skin allergies, which raises important questions about unintended human health consequences from frequent sunscreen application.

Active ingredients in sunscreens function as either mineral or chemical UV filters that keep harmful rays from the skin. Each uses a different mechanism for protecting skin and maintaining stability in sunlight. The most common sunscreens contain chemical filters. These products typically include a combination of two to six of the following active ingredients: oxybenzone, avobenzone, octisalate, octocrylene, homosalate and octinoxate. Mineral sunscreens use zinc oxide and/or titanium dioxide. A handful of products combine zinc oxide with chemical filters.

When the FDA began to consider sunscreen safety, it grandfathered in active ingredients from the late 1970s without reviewing the evidence of their potential hazards. In February 2019, the agency released its final draft sunscreens monograph, which contains insufficient health and safety data to designate 12 of the 16 sunscreen filters allowed for use in the U.S. as generally recognized as safe and effective, or GRASE. These 12 ingredients include some of the most commonly used UV filters, including oxybenzone, octinoxate, octisalate, octocrylene, homosalate and avobenzone. According to the agency, “nearly all of these sunscreen active ingredients … have limited or no data characterizing their absorption.”

Drawing on the available literature, the agency concluded that the risks of using aminobenzoic acid (PABA) and trolamine salicylate outweigh their benefits, and it proposed classifying them as unsafe. The FDA monograph giving the GRASE designation to just two active sunscreen ingredients: zinc oxide and titanium dioxide.

The Danish EPA reviewed the safety of active ingredients in sunscreen and concluded that most lacked enough information to establish their safety (Danish EPA 2015). In the case of 16 of the 19 ingredients studied, there was no information about their potential to cause cancer. And though the published studies suggest that several chemical filters interact with human sex or thyroid hormones, there was not enough information about any of them to determine the potential risks to humans from hormone disruption.

EWG has reviewed the existing data about human exposure and toxicity for the nine most commonly used sunscreen chemicals. The most worrisome is oxybenzone, which can cause allergic skin reactions (Rodriguez 2006). In lab studies, it is a weak estrogen and has potent anti-androgenic effects (Krause 2012, Ghazipura 2017).

The Centers for Disease Control and Prevention routinely detect oxybenzone in more than 96 percent of Americans. Study participants who reported using sunscreen have higher oxybenzone exposures (Zamoiski 2015). Investigators at University of California, Berkeley, reported a dramatic drop in teen girls’ exposure to oxybenzone in cosmetics when they switched from their usual products to replacements that did not contain this chemical (Harley 2016).

In an evaluation of CDC-collected exposure data for American children, researchers found that adolescent boys with higher oxybenzone measurements had significantly lower total testosterone levels (Scinicariello 2016). The researchers cautioned that their results offer a single-day snapshot; they are not a controlled study of the effect of multiday exposures. The study did not find a similar hormone effect in younger boys or females.

Intentional dosing studies of people are rare. In one, volunteers applied a lotion containing oxybenzone and two other sunscreen ingredients. Researchers reported a minor but statistically significant decrease in testosterone in men, accompanied by a minor increase in inhibin B, another male sex hormone (Janjua 2004). The researchers concluded these differences were normal variations and not attributable to sunscreen exposure. In any event, critics argue the exposures were too short to be conclusive (Krause 2012).

According to the latest FDA sunscreens monograph, the agency needs further data to determine the GRASE status of oxybenzone, given that the “available literature … indicat[es] that oxybenzone is absorbed through the skin to a greater extent than previously understood and can lead to significant systemic exposure.… The significant systemic availability of oxybenzone … is a concern, among other reasons, because of questions raised in the published literature regarding the potential for endocrine activity.” Given the pervasiveness of oxybenzone exposures, we need further study to clarify its association with hormone disruption in children and adults.

EWG recommends consumers avoid sunscreens with oxybenzone. But sunscreen users are exposed to other active ingredients too. Margaret Schlumpf of the University of Zurich detected four other sunscreen filters along with oxybenzone in Swiss women’s breast milk, which suggests that the developing fetus and newborns may be exposed to these substances (Schlumpf 2008, Schlumpf 2010). She detected at least one sunscreen chemical in 85 percent of milk samples.

Several common chemical filters appear to be endocrine disruptors. Many studies in animals and cells have shown that the chemicals affect reproduction and development by altering reproductive and thyroid hormones, although the evidence is mixed for some studies (Krause 2012). Animal studies report lower sperm counts and sperm abnormalities after oxybenzone and octinoxate exposure; delayed puberty after octinoxate exposure; and altered estrous cycling for female mice exposed to oxybenzone. Recently, Danish researchers reported that eight of 13 chemical sunscreen ingredients allowed in the U.S. affected calcium signaling of male sperm cells in laboratory tests, which the researchers suggest could reduce male fertility (Endocrine Society 2016).

Since most of the hazard data is generated from animal studies, it is difficult to determine the human health implications of exposure to a mix of hormone-disrupting ingredients in sunscreen.

In addition to the relationship between oxybenzone and testosterone levels in adolescents, preliminary investigations by a team of researchers at the National Institutes of Health and the State University of New York, Albany, suggest a link between higher concentrations of benzophenones and poorer reproductive success in men seeking assistance at a fertility clinic. Men with greater exposures to benzophenone-2 and/or 4-hydroxyoxybenzone had poorer sperm quality (Louis 2015) and reported that it took longer for their partners to conceive (Buck-Louis 2014). Female exposures to oxybenzone and related chemicals have been linked to increased risk of endometriosis (Kunisue 2012).

Mineral sunscreens are made with zinc oxide and titanium dioxide, usually in the form of nanoparticles. Evidence suggests that few if any zinc or titanium particles penetrate the skin to reach living tissues. So mineral sunscreens tend to rate better than chemical sunscreens in the EWG sunscreen database. However, it is important that manufacturers use forms of minerals coated with inert chemicals to reduce photoactivity. If they don’t, users might suffer skin damage, although to date no such problems have been reported.

The FDA should set guidelines and place restrictions on zinc and titanium in sunscreens to minimize the risks to sunscreen users and maximize these products’ sun protection. Our detailed analysis of nanoparticles in sunscreens is available here.

The FDA must also look closely at the so-called inactive ingredients in sunscreens. These typically make up 50% to 70% of a sunscreen.

In 2015, researchers from 15 American and Canadian clinics reported an increase in methylisothiazolinone allergies in patients. The researchers concluded they had documented “the beginning of the epidemic of sensitivity to methyliosthiazolinones in North America” (Warshaw 2015). That methylisothiazolinone has become relatively common in sunscreen is a matter of concern because sunscreen users are likely to be exposed to significant concentrations of it. The products that contain it are intended to be applied to large portions of the body and reapplied often.

In March 2015, the European Scientific Committee on Consumer Safety concluded that no concentration of the chemical could be considered safe in leave-on cosmetic products (EU SCCS 2014). But methylisothiazolinone is still allowed in U.S. products. In 2014 the Cosmetics Ingredient Review, or CIR, expert panel – an independent body the American cosmetics industry pays to advise it on the safety of cosmetics ingredients – told the industry that methylisothiazolinone was safe for use in body care products as long as manufacturers came up with formulations that wouldn’t cause allergic reactions (CIR 2014). Since FDA has little legal power to regulate cosmetics ingredient safety, it has authorized the cosmetics industry to police itself through this panel, but it’s recommendations are not legally binding, and in several decades, it has declared only 12 ingredients or chemical groups to be unsafe (CIR 2017).

EWG recommends the FDA launch a thorough investigation of the safety of all sunscreen ingredients to ensure that none of them damage skin or cause other toxic effects.