Why Taking Herbal Supplements During Cancer Treatment Can Be Dangerous 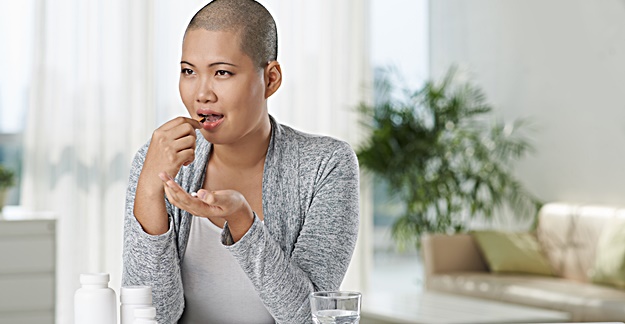 When a patient with breast cancer had more than the usual amount of toxic effects from the chemotherapy regimen she was on, Hardeep Phull, MD, an oncologist with the Sharp Rees-Stealy Medical Group in San Diego, was puzzled.

“It’s normal to have some side effects, but she was extremely tired, and the more tired she got, the more supplements she took, thinking it would boost her energy. When I noticed she drank what looked like a milkshake, I asked her what’s in it, and turns out it was milk with turmeric, and she had two bottles of it a day with lots of turmeric,” Phull said.

Turmeric has antiseptic properties and has been widely used in India since ancient times. However, if you walk into any grocery store or pharmacy today, you will find bottles of turmeric supplements. But as with all herbs, moderation is key to consumption, and in this case, the patient was on harsh chemotherapy drugs, so she should have consulted her doctors before taking any herbal supplements, which often have highly concentrated levels of herbs.

“Once we got her off the turmeric supplement, she tolerated the chemo really well,” Phull said.

What precise effect the turmeric had is hard to explain, but he said it’s known to reduce the efficacy of certain drugs.

With gaps in the regulation of dietary supplements, products have proliferated and now represent a multibillion-dollar industry. An analysis that appeared in journal Oncology last year studied data and found that a majority of patients (numbers vary according to various studies) undergoing cancer treatment were using supplements, and that they tended to take them more often than the general population to alleviate side effects from harsh treatments and in hopes of avoiding a recurrence.

What many are not aware of is that all herbs contain biologically active compounds that can interact with other drugs patients are on, creating potentially harmful side effects. Researchers from Memorial Sloan Kettering Cancer Center who worked on the Oncology Journal paper found that four specific herbs and a mushroom were particularly popular with cancer survivors.

Turmeric, green tea, ginger, ashwagandha and the reishi mushroom were the most frequently taken supplements.

On their own, each of these has beneficial effects, but the danger is in taking supplements without discussing them with an oncologist, taking too much and not being aware of how they can interact with different drugs.

MedShadow published a story last year on the hazards of relying too much on complementary therapies, which should never take the place of proven treatments. The article referenced a JAMA Oncology study that found that relying on supplements instead of traditional allopathic treatment while suffering from breast, colorectal, lung and prostate cancer can actually double the risk of dying from these cancers over a nine-year period.

“In general, when it comes to supplements, your diet is your best friend. A healthy diet rich in vegetables and fruits will ensure you get the vitamins and antioxidants that you need,” said Cathi Dennehy, a pharmacist and professor at the University of California, San Francisco School of Pharmacy who has done a lot of research on herbs and supplements.

Many of the supplements have antioxidant properties, which are good, but not when you’re on chemotherapy that uses free radicals to kill cancer cells — because the antioxidant can interfere with the chemo.

Dennehy also pointed out that most of these supplements are regulated as food products, not as drugs, so they’re not held to the same standard as drugs.

She referred to the benefits of garlic, which is believed to lower incidences of cancer. When patients hear about it, they buy garlic supplements, which make spurious claims about its efficacy.

“Manufacturers are prone to exploiting vulnerable populations seeking ways to fight their disease, even though the law states supplements cannot make claims,” she said. “What I would tell a consumer dealing with cancer is to work with your provider. They are there to work with you to make informed decisions, not based on anecdote or hearsay. A good clinician will work with you on all possible therapies, so bring it up with them, ask if it’s right for you, is it safe to use.”

She noted that many chemotherapy drugs have been derived from plants, which are a source of new drug development. But plants do have active compounds, so it’s better to be smart and cautious about using supplements.

Phull concurred that nutrients found in food are provided in a ratio and concentration that is healthful for the human body, as opposed to highly concentrated forms found in supplements.

“Doctors are terrible at asking about what medications patients are on. We ask about the drugs we are prescribing, or look at the [electronic medical record] for existing medications. We don’t ask often enough what the patient is self-prescribing at home,” Phull said. “I have seen many cases in which we end up finding out in retrospect that certain side effects or outcomes were due to a patient taking a supplement which no one had asked about. You have to very specifically ask, ‘Are you taking herbs? Are you taking teas?’”

He uses the Memorial Sloan Kettering website about herbs as a reference source, and suggests patients and cancer survivors look it up and discuss it with their physicians before buying any supplements.

“Each patient is different and deserves to be heard. Patients who take supplements often do so because they want to feel they’re in control of their bodies. We need to give them some control, but if there is discord or clear danger to the patient, I find that there is a potential compromise in consuming healthy amounts of the native food from which a supplement is derived.”

Phull had another patient who experienced bruising while on blood thinners, as well as ibuprofen for back pain. Everyone wanted to blame the ibuprofen, but when he questioned her, he found she was using turmeric supplements. Once she stopped taking them, the bruising went away.

Another patient was on a very concentrated form of green tea while taking tamoxifen for breast cancer. She had joint pain and hot flashes, and wanted to stop tamoxifen, but Phull knew her cancer would come back if she stopped taking it. He did some research and found out green tea could interact and cause side effects, so once the patient went off the green tea supplement, she tolerated the tamoxifen well in the long term.

The green tea supplement also prevented another patient from absorbing iron needed to boost their hemoglobin levels. It turned out the patient was taking it with green tea each morning, and the tea has tannins that block iron absorption.

“Giving patients control is key, but judicious control is really important. Having green tea twice a day is not a bad idea, but a supplement that’s very concentrated is not good,” he said.

His colleague, Mariela Macias, MD, also a Sharp Healthcare oncologist, said that she has made it a practice to ask patients about their supplement use, due to potential interactions with their oncological care.

“For instance, many of my breast cancer patients use turmeric, guanabana [soursop] and moringa due to their possible anti-cancer effects,” Macias said. “I asked them to hold turmeric during their chemotherapy, since it can decrease the effect of a commonly used drug, cyclophosphamide.”

When she sees oncology patients who also have other common health issues such as diabetes and hypertension, she cautions them against the use of supplements that can increase the effect of those drugs and put them at risk of hypoglycemia and hypotension (low blood pressure).

In addition to the five supplements highlighted in the Oncology Journal review, Macias also brought up moringa, a fairly new supplement in the US that’s derived from a humble, common plant in India. It’s touted to have many health benefits and has popped up in supplement pills, powders and teas.

Macias had a breast cancer patient who was on tamoxifen and was also taking high doses of moringa. When she did routine checks of the patient’s estradiol levels for chemical menopause, she was surprised to find the levels were extremely high. She began to worry that this would cause tumors, so when tests could not point to the cause, she asked the patient to bring in everything she was taking and found out about the large doses of moringa. Once she put a stop to it, the estrogen levels normalized.

“My hypothesis is that moringa could increase the luteinizing hormone, which causes cross stimulation of other hormones that can increase estradiol levels. So I now caution patients about this supplement,” she said.

An open discussion about herbal supplements, and an abundance of caution in taking any, is critical as patients navigate the choppy waters of cancer treatment.