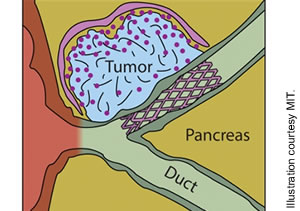 An implantable device that directly delivers chemotherapy right to the site of tumors may more effectively treat pancreatic cancer with far fewer side effects.

Most forms of chemotherapy today are given via intravenous injection, meaning the drug must travel through much of the body before it reaches the site of the cancer, negatively impacting other organs and causing a host of nasty side effects.

The device, which has been developed by scientists at the Massachusetts Institute of Technology and Massachusetts General Hospital, is made from a flexible polymer film containing a chemotherapy agent that can be rolled into a tube, put into a catheter and implanted next to the pancreas. It then unfolds and can just cover the tumor itself, making it very targeted.

The film itself is designed to release drugs over a certain period of time and only on the side that touches the tumor, minimizing potential side effects since the chemotherapy doesn’t reach other organs.

The team focused on pancreatic cancer since it is one of the most difficult organs for chemotherapy to reach. It is also the third leading cause of cancer death in the US with a 5-year overall survival rate of just 6%. In addition, the pancreas has relatively few blood vessels, making it hard for drugs to reach inside.

As of now, the efficacy of the device has only been tested on rodents. However, recent study resultsshow promise for the technology. In the study, researchers used mice with transplanted human pancreatic tumors in them.

One group received the popular chemotherapy drug paclitaxel inserted into the device, while the other group also got paclitaxel, though delivered intravenously over four weeks, similar to standard chemotherapy treatment in humans.

Tumors in the rodents with the implants shrank more compared to tumors in the group that received the standard chemotherapy regimen. Even more remarkable, in the implant group, in some rats saw their tumors disappear completely.

The researchers also noted that the film acted as a kind of barrier to prevent the drug from harming other organs. And after 4 weeks, the concentration of paclitaxel in tumors in the implant group was 5 times higher than in the intravenous-treated rats.

Researchers are currently designing a trial of the device for a human trial, and note that the technology could potentially expand to treat other hard-to-reach tumors such as those in the gastrointestinal tract.