5 Common Meds That Cause Liver Damage 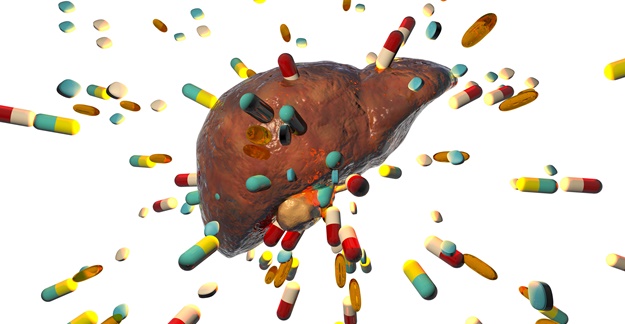 Your liver is one of the body’s most crucial organs. Unfortunately, many drugs can put extra strain on it. Find out which ones do and how to minimize harm.

Day in and day out, week after week and year after year, as you eat, drink and take medications or supplements, there’s an unsung hero working hard to filter and process all of these substances, store the nutrients and get rid of the waste: your liver. That adds up to lots of chances that something passing through might harm this vital organ. Numerous medications, for example, have been shown to increase the risk of liver damage – that goes for herbal medicines too, as well as dietary supplements.

“There is increasing evidence that complementary and alternative medicines such as supplements and herbs can cause liver damage. These include kava, Comfrey, mistletoe and others,” says Lauren Aleksunes, PharmD, PhD, associate professor of pharmacology and toxicology at the Ernest Mario School of Pharmacy at Rutgers University, and resident scientist at the Environmental and Occupational Health Sciences Institute. “Just because they can be purchased without a prescription does not mean they are safe.”

Research on people who used herbal and dietary supplements found that liver damage rose 20% from 2004 and 2013. For more information on supplements and liver damage, read: 15 Supplement Ingredients to Always Avoid.

In total, liver disease from drugs is uncommon, so don’t panic if you see a med you use on the list below. Ask your doctor if you need to have your liver checked and, as with all drugs and supplements, use the lowest dose that is effective and use it for the shortest period of time.

The following five over-the-counter (OTC) and prescription drugs are some of the most common medications known to cause liver damage, according to Norman P. Tomaka, MS, FAPhA, a consultant pharmacist and healthcare risk manager based in Melbourne, Florida, and media liaison for the American Pharmacists Association, with assistance from Javier Martiney, a current PharmD student from the University of South Florida.

A common remedy for mild pain and fever, acetaminophen can damage the liver by mistakenly overdosing or by taking it for too long a time (builds up in the body). quickly, over time and/or in combination with alcohol.

Overdosing by mistake is easily possible with acetaminophen, either alone or in combination with other common meds. In general, adults can take between 650 milligrams (mg) and 1,000 mg of acetaminophen every 4 to 6 hours. The FDA recommends that an adult shouldn’t take more than 3,000 mg. But beware of combination products that contain acetaminophen to make sure you are not taking more than one medicine containing this drug. These include commonly used cough, cold, and pain medications. Labels may not list the word “acetaminophen” but instead may use abbreviations like APAP, AC, acetaminophen, acetaminoph, acetaminop, acetamin or acetam.

Tylenol also damages the liver when taken with alcohol. For more on Tylenol overdose risk, read Double Trouble with Acetaminophen.

Acetaminophen is known to cause liver damage by producing a toxic metabolite in the body that accumulates over time and causes a change in the structure of the liver, which lowers its ability to work normally.

Other pain medicines that are commonly associated with liver injury include Advil (ibuprofen), Voltaren (diclofenac), and sulindac. “This is a predictable type of liver damage,” notes Aleksunes. “For other medications, liver damage is rare and not entirely predictable.”

This medicine is commonly used to treat gout and is sometimes used for the prevention of recurring kidney stones. It most commonly causes liver damage by provoking an allergic response in the body.

This is a combination of an antibiotic and a drug that prevents bacteria from destroying the antibiotic. It is used to treat bacterial infections including pneumonia, urinary tract infection and sinusitis. It is also believed to cause liver damage by triggering an allergic response in the body, but researchers have not yet figured out the exact process by which this happens. Other antibiotic and antifungal medicines that are commonly associated with liver injury include isoniazid, trimethoprim/sulfamethoxazole, erythromycin, nitrofurantoin, minocycline, and ketoconazole.

Statins, which are used to reduce cholesterol and triglycerides, can harm the liver. Atorvastatin is thought to cause liver damage by producing a toxic metabolite or provoking an allergic reaction, although the exact mechanism is unknown. Zocor (simvastatin), another statin, has also been associated with liver injury. Aleksunes adds that liver damage from these medications is usually mild and typically reversible after a patient stops taking the drug (with guidance from their health care provider, of course).

This medication is used to prevent some types of seizures in patients who have epilepsy. It is also used in the treatment of bipolar disorder and to prevent migraines. It can directly cause liver damage by depositing fats in liver cells – a condition known as steatosis – which lowers its ability to work normally. Other anti-seizure drugs that have been linked with liver damage include Tegretol (carbamazepine) and Dilantin (phenytoin).

Look for signs and symptoms of liver damage if you are taking one of these medications. These usually appear within six weeks of starting a drug and may include stomach pain, nausea, tiredness, dark urine, loss of appetite, itching, and yellow skin or eyes. Immediately contact your prescriber if you observe these symptoms.

In addition to medicines and supplements, “it is becoming increasingly evident that differences in a person’s genetics can heighten the risk of liver damage,” according to Aleksunes. To help you avoid these kind of side effects, she suggests you talk to your pharmacist and health care providers about herbal and supplement medications you are taking, as some over-the-counter supplements can cause liver damage. Also, read the drug insert that you receive from the pharmacist which will let you know if the prescribed medication can potentially cause liver damage.

Tomaka also emphasizes the importance of taking your medicine as directed on the label or prescription. Never take a double dose at one time, and do not exceed the maximum daily dose noted on the label. If you have signs and symptoms of liver damage, your doctor may choose to stop your medication and prescribe a different one. A steroid might be prescribed to help lower inflammation caused by the injury, and an antihistamine such as Benadryl may be used to help with itching caused by allergy to the medicine.