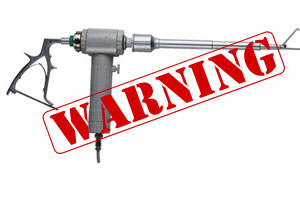 A recent Food and Drug Administration (FDA) ruling sent shockwaves through many women, reminding us again why we need to know about the risks of our surgeon’s tools and techniques.

In November, the FDA sent their most serious warning to physicians and manufacturers about the risk of using laparoscopic power morcellators (LPMs) — medical devices used during different types of laparoscopic (minimally invasive) surgeries. These can include certain procedures to treat uterine fibroids, such as removing the uterus (hysterectomy) or removing the uterine fibroids (myomectomy).

Of the 600,000 hysterectomies a year in the U.S., nearly half of those procedures are minimally invasive, and a growing percentage of surgeons use LPMs because they break up tissue into small bits that can be pulled through tiny incisions in the belly. However, while pulverizing tissue inside the abdomen, LPMs might spread cells from unrecognized uterine cancer.

LPM’s are used during uterine surgery in at least 50,000 women a year in the U.S. in operations to remove fibroid tumors from the uterus or to remove the entire uterus during a hysterectomy, according to a report in The New York Times.

Why were morcellators used in the first place? LPMs allow for less invasive surgery than other options, like laparotomies, which means shorter post-operative recovery time and a reduced risk of infection for the patient. Morcellators also break up the tissue into small pieces, which allows the uterus to be removed more easily, according to an article in Nature

On learning about the harm to thousands – and potentially millions — of women, the FDA convened advisory committee meetings of their Obstetrics and Gynecology Devices Panel and the Medical Devices Advisory Committee earlier this year to discuss the use and labeling of LPMs during gynecologic surgeries.

They also conducted a review of published and unpublished scientific literature, including patients operated on from 1980 to 2011. From this analysis, FDA estimated that the prevalence of unsuspected uterine sarcoma in patients undergoing hysterectomy or myomectomy for presumed benign leiomyoma (fibroids) is 1 in 352 and the prevalence of unsuspected uterine leiomyosarcoma (cancer of soft tissue) is 1 in 498. Both of these estimates were higher than the clinical community previously understood.

Wait: there is more

If LPM is performed in these women, there is a risk that the procedure will spread the cancerous tissue within the abdomen and pelvis, significantly worsening the patient’s likelihood of long-term survival.

FDA also determined “the prevalence of unsuspected cancer in women undergoing hysterectomy for fibroids increases with age such that the benefit/risk profile of using LPMs is worse in peri- and post-menopausal women compared to pre-menopausal women.”

As a result, the FDA recently required a black box warning (the most serious notice of risk) for LPMs, stating: “uterine tissue may contain unsuspected cancer. The use of laparoscopic power morcellators during fibroid surgery may spread cancer and decrease the long-term survival of patients. This information should be shared with patients when considering surgery with the use of these devices.”

They also recommended that manufacturers of LPMs include two contraindications (when LPMs should not be used):

Are these warnings enough?

Many people would like the FDA to ban the device all together. Ask Amy Reed, anesthesiologist, mother of 6, who has stage 4 cancer after undergoing a routine hysterectomy to remove fibroids.

But the American College of Obstetricians and Gynecologists argues that with more stringent patient selection, the device remains an important tool, according to a report in The Wall Street Journal.

The FDA wrote in a recent announcement that the two contraindications help to clarify the narrow population of patients in which LPM may be an appropriate therapeutic option, explaining: “some younger women who are interested in maintaining their ability to have children or wish to keep their uterus intact after being informed of the risks may be candidates for this procedure.”

Separately, on December 5, 2014, an expert panel convened at the American Association of Gynecologic Laparoscopists (AAGL) annual meeting and issued their own statement on the subject, which endorsed the continued use of morcellators, concluding that “power morcellation is an important tool in treating symptomatic uterine fibroids which allows up to 150,000 women each year to undergo minimally invasive surgery when they would otherwise require laparotomy for an abdominal hysterectomy. While research, education, and improved tissue extraction techniques can probably further enhance the safety profile of power morcellation, the elimination of power morcellation and conversion of these women to open surgery would likely increase morbidity and mortality from open surgery and cause harm to more patients.”

FDA Continues to Weigh the Evidence

The FDA has clearly urged physicians to inform their patients of the risk of spreading unsuspected cancer from using LPMs in fibroid surgery and discuss the benefits and risks associated with all treatment options. Manufacturers have also been warned and must change their labeling information. “The FDA’s primary concern is the safety and well-being of patients and taking these steps will help the agency’s safety recommendations to be implemented as quickly as possible,” said William Maisel, M.D., M.P.H., deputy director for science and chief scientist at the FDA’s Center for Devices and Radiological Health.

Indeed, the agency is continuing to monitor and review this procedure as well as adverse event reports, peer-reviewed scientific literature, and information from patients, health care providers, gynecologic and surgical professional societies, and medical device manufacturers. The FDA encourages the public to file a voluntary report through MedWatch, the FDA Safety Information and Adverse Event Reporting program.

FDA also recommends that women discuss all options with their health care provider, reviewing the risks and benefits. If laparoscopic hysterectomy or myomectomy is recommended, ask if power morcellation will be performed during the procedure, and be sure the doctor explains why he or she believes it is the best treatment option.

In response to the FDA’s actions, Johnson & Johnson, the largest manufacturer of the devices, subsequently suspended sales but since there has not been a recall of LPMs, other manufacturers are continuing to sell the devices. In addition, a major hospital chain — HCA Holdings Inc., a for-profit hospital chain with about 160 hospitals and 115 surgery centers across 20 states — stopped using them and over the past year other hospitals, including Brigham and Women’s and Massachusetts General, have been changing their procedures for power morcellation use.

We can all help by staying informed and talking with our doctors about risks and benefits of medical devices as well as of prescription medications.

Everything Below the Waist: Why Health Care Needs a Feminist Revolution