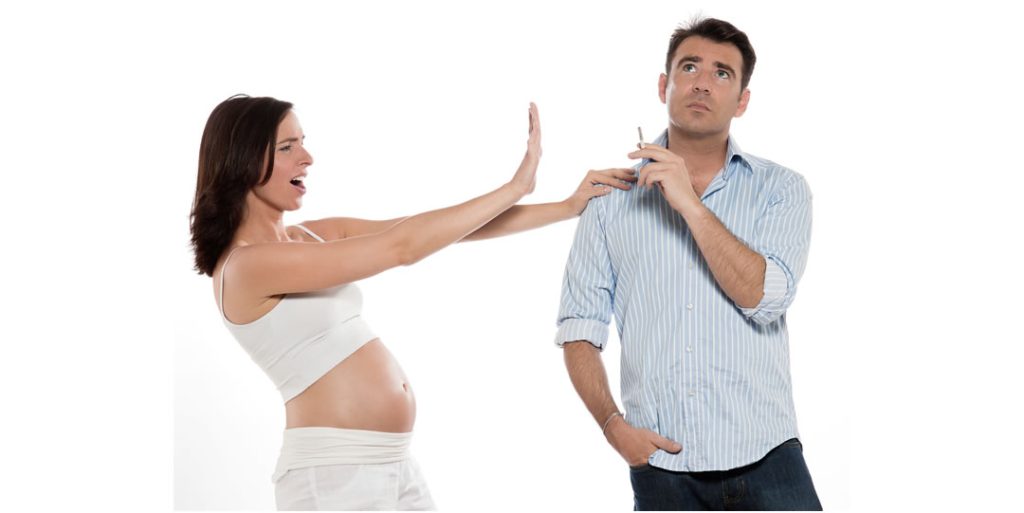 Ladies and gentlemen, more convincing reasons moms-and-dads-to-be should put down that cigarette.

Two recent studies indicate the risk of both maternal and paternal smoking for health defects in their offspring. Yes, dads-on-deck, you read that right: Your reaching for that pack of cigarettes can affect your unborn baby’s health, too.

First, a March 2019 study published in the European Journal of Preventive Cardiology revealed that paternal smoking is associated with a heightened risk of congenital heart defects in their offspring. The meta-analysis reviewed 125 studies that included 137,574 babies with congenital heart defects, and found an increase for such defects of 74% for men smoking, 124% for passive smoking (involuntary inhaling of cigarette smoke from others) in women, and 25% for women smoking, compared to no smoking exposure.

“Fathers-to-be should quit smoking,” said study author Dr. Jiabi Qin, of Xiangya School of Public Health, Central South University, Changsha, China, in a press release. “Fathers are a large source of secondhand smoke for pregnant women, which appears to be even more harmful to unborn children than women smoking themselves.”

The study author also advises that women stop smoking before they attempt to conceive, and that they work to limit their exposure to smoking environments. “Doctors and primary healthcare professionals need to do more to publicise and educate prospective parents about the potential hazards of smoking for their unborn child,” Dr. Qin also noted in the media statement.

Another study, published in March 2019 in Pediatrics, gives smokers looking to become parents increased incentive to put down the butt. Here, the research found that the higher the levels of cotinine — a product created in the body after nicotine is used — in a mother’s blood during pregnancy, the greater the child’s risk of developing attention-deficit hyperactivity disorder, or ADHD.

“Exposure to maternal smoking is associated with various adverse perinatal outcomes. An association between maternal smoking and offspring ADHD has been shown in several studies. However, the causality of the association has been questioned to be mostly due to familial confounding,” said adjunct professor Roshan Chudal from the Research Centre for Child Psychiatry at Finland’s University of Turku, one of the researchers who conducted the study, in a press release.

“All previous studies on the topic were based on maternal self-report of smoking that has been shown to underestimate the true rates of smoking. The disclosure of smoking is even lower among pregnant smokers,” Dr. Chudal noted of this study, which analyzed 1,079 ADHD cases and an equal number of matched controls for individuals born between 1998 and 1999. For their research, scientists looked at maternal cotinine levels collected from maternal serum specimens during the first and second trimesters of pregnancy and stored in the national biobank.

Ready to become a mom or dad but struggling with a nicotine addiction? Check out our overview of smoking cessation medications and alternative methods to quit.