Q&A: A Doctor Challenges the FDA on Safety 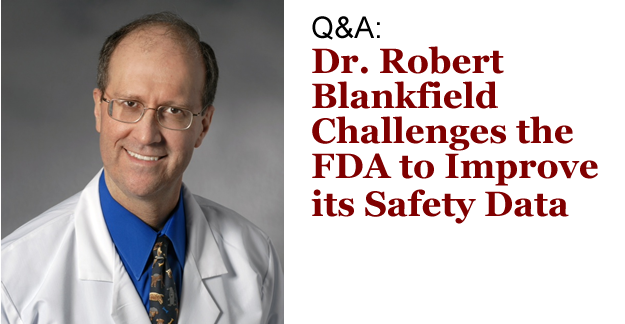 In May 2014, Robert P. Blankfield, MD, MS, a clinical professor of family medicine, Case Western Reserve University School of Medicine, published an editorial in an online edition of the Journal of Cardiovascular Pharmacology and Therapeutics that charged the FDA to be more vigilant about approvals of medications that can affect blood pressure, even a small amount. Dr. Blankfield, who is also a physician at University Hospitals Medical Practices, Berea, Ohio, recently spoke with MedShadow about his concerns:

MS: What prompted you to write this editorial?

I’ve been trying for a while to get some attention to this issue. Several medications that were approved by the FDA that incidentally raise blood pressure were eventually pulled from the market after reports showed that these drugs increase the risk of heart attacks and strokes. These drugs include rofecoxib (Vioxx), valdecoxib (Bextra), sibutramine (Meridia) and phenylpropanolamine.

MS: There seems to be some controversy over what constitutes a “clinically significant” increase in blood pressure. Isn’t there a standard?

MS: Vioxx raised blood pressure quite high, but you seem to be saying that the FDA is ignoring smaller increases that could be significant as well.

MS: Why should we worry if these drugs are off the market now?

MS: Why are they out there if the others got pulled?

Although these drugs raise blood pressure, there is no cardiovascular safety data to justify regulating these drugs. The drugs that got pulled were taken off the market because safety data demonstrated an increased risk of heart attacks and strokes.

MS: Why do you think that the FDA failed to take a look at the cardiovascular risk of these drugs if they are potentially so problematic – political pressure, short staffed?

According to Norman Stockbridge, MD, PhD, Director, Division of Cardiovascular and Renal Products, FDA Center for Drug Evaluation and Research, the FDA recognizes that a modest elevation in blood pressure, even if it is undetectable in any given individual, increases the risk of heart attacks and strokes. Nonetheless, in the absence of unfavorable safety data, the FDA’s stance is that no regulatory action is indicated. Such reasoning makes sense only if the mandate of the FDA is to respond to existing data. However, it makes no sense that the FDA chooses to ignore predictable risk. The reason that there is no safety data is that the FDA failed to require such data at the time of drug approval. It is unwise policy to allow drugs that predictably increase risk to remain on the market without adequate safety data. The stance that the FDA has taken undermines its credibility as an unbiased regulatory agency.

MS: Why do you think the FDA has not responded to your editorial?

Whenever there is criticism, the FDA’s reaction seems to be to hunker down and wait for it to pass. Invariably, the storm of criticism eventually passes.

MS: How have colleagues responded to your editorial?

Several colleagues have informed me that they agree with what I am saying, including Steven Nissen, MD, Chairman of Cardiovascular Medicine at the Cleveland Clinic Foundation.

MS: If someone is on those medications, what should they do? Contact their physician?

Any reasonable physician is likely to say there is no data demonstrating an increased risk for those medications, that the risk is entirely theoretical. To which I say, shame on the FDA for not mandating the collection of the appropriate safety data. Unless there is pressure applied to the FDA to change its policies, the current situation will not change, and the problem will go on and on.