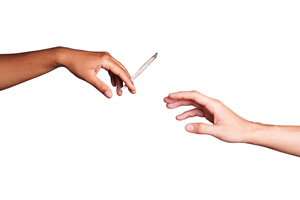 Does anyone remember the cult comedy classic “Reefer Madness,”  the propaganda movie put out in the 1930s to scare teens away from pot? The movie showed high school students who have a hit and run accident, manslaughter attempt, attempted rape and a descent into final madness all because of casual pot use. When I was in college (in the late 1970s), “Reefer Madness” seemed so far-fetched that all of its claims about marijuana use seemed ludicrous.

A new study from the University of Maryland School of Medicine suggests that some of the premises in the movie may not have been too far off after all. The study shows that youths who smoke pot can permanently impair their brain function and cognition. Pot smoking can increase the risk of developing serious psychiatric disorders such as schizophrenia in young teens. These results do not occur in adults who smoke marijuana, however.

Teens are damaged by smoking marijuana and adults are not because of the stages involved in brain development in pre-adolescents. Pot smoking causes a missed stage of pre-frontal cortex development that, seemingly, cannot be made up. The study was conducted on mice and led by Asaf Keller, a professor of anatomy and neurobiology at UM School of Medicine.

“Children who start around pre-adolescence, 13-15 years of age, tend to develop very severe deficits and these include a very high incidence of neuropsychiatric disorders like schizophrenia and attention deficit disorders, as well as, long-term permanent reductions in intelligence as measured by IQ tests,” says Dr. Keller in an interview.

Teens smoking pot is a completely different issue from medical marijuana use for children suffering from certain conditions. You may have read about or seen Dr. Sanjay Gupta’s widely reported change of opinion on that score. He had been against giving medical marijuana to children until he started working on a documentary called “Weed.” In the course of that work, he saw instances that made him rethink his position: In a piece on CNN and posted on the CNN website, he says, “Take the case of Charlotte Figi, who I met in Colorado. She started having seizures soon after birth. By age 3, she was having 300 a week, despite being on seven different medications. Medical marijuana has calmed her brain, limiting her seizures to 2 or 3 per month.”

“In the adult mice exposed to marijuana ingredients in adolescence, we found that cortical oscillations were grossly altered, and they exhibited impaired cognitive abilities,” says the study’s lead author, Sylvina Mullins Raver, a Ph.D. candidate. “We also found impaired cognitive behavioral performance in those mice. The striking finding is that even though the mice were exposed to very low drug doses, and only for a brief period during adolescence, their brain abnormalities persisted into adulthood,” according to the press release on the study.

Theories of perception claim that the brain continuously updates an “internal model of the world.” The brain packages sensory information  into units used to predict the causes of sensory input and the timing of it. Here is a study that reviews the “neurophysiological bases of sensory predictions of ‘what’ (predictive coding) and ‘when’ (predictive timing), with an emphasis on low-level oscillatory mechanisms.” In other words, we need cortical oscillation to understand and react with reasonable speed to what is happening around us.

As an alumna of University of Maryland (1979), I have to admit that I witnessed some marijuana smoking first-hand — mostly when the Student Union ran the 1936 film “Reefer Madness.” It’s ironic to know now, all these years later, that pot use in adolescents is not really a laughing matter.

For more in depth information on the neurobiology involved, see: