About Shoulder Pain Post-Vaccination: When Do I Need to See a Doctor? 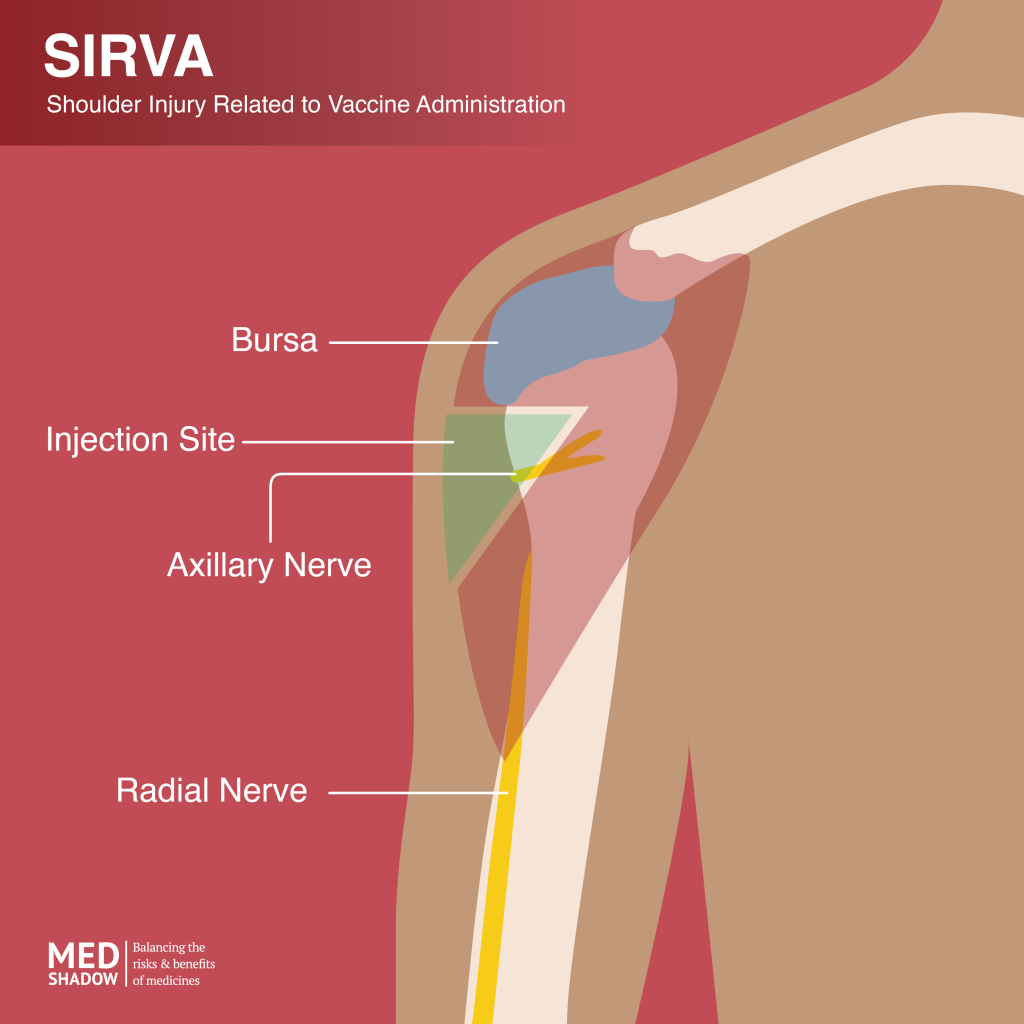 When MedShadow started collecting comments for its side effects of COVID-19 vaccine tracker, what quickly emerged is that COVID-19 shots are also associated with substantial arm pain. That result was so common that we published a separate article about the redness, pain and rashes that sometimes followed the jabs. In most cases, this was a typical response to the vaccine, which cleared up within a few days. Injection-site reactions, including redness and pain, were the most reported side effect in the COVID vaccine trials, affecting more than 84% of patients who received a Pfizer shot. On occasion, though, the reactions appeared a week later and lasted about a week.

In rare instances, arm pain after a vaccine can be something other than a normal immune reaction. If a vaccine—any vaccine—is administered too high up on the arm, it can get into the bursa, a fluid-filled sac that protects your joints. If that’s the case, it causes the immune system to attack your shoulder. This translates into pain and decreased range of motion that can last for weeks or even much longer.

In our article about arm pain after COVID shots, we received a number of comments complaining of longer-lasting pain. *In July, Jim, for example, wrote, “Hi JoJo, Got my second Moderna shot 10 Feb and my arm hurt quite a bit until about three weeks ago. Have not felt any pain for last three weeks or so and am hoping that those side effects are going away. I do have a little arthritis in both shoulders, but had some of that previously. The pain I had after the second shot was like a rotator cuff injury and quite painful at times. I used a heating pad a lot for a while. Hang in there. I believe it will get better for you. jim in Va.”

* Stacey Edmonds described similar issues, writing, “I have the SAME issues. It’s been 5 weeks since my Pfizer vaccine & I can barely lift my arm above my head. I have pain when lifting my toddler or doing the smallest of things. I can’t lie on my left side without pain & I struggle doing arm exercises at the gym. I have random shooting pains with the slightest of movement. I really hope this isn’t permanent 🙁”

The term shoulder injury related to vaccine administration (SIRVA), gained attention over the last decade as patients filed lawsuits with the National Vaccine Injury Compensation Program. In 2015, it was added to the vaccine injury table, which makes it easier for patients who experience it to get compensation. It’s not so much a definitive medical diagnosis as it is a legal term describing a range of possible injuries due to inflammation in the shoulder connected to receiving the vaccine incorrectly. It’s more common in women than in men, and in adults than in children, but other factors, like Body Mass Index (BMI), don’t seem to play a role in the likelihood that you may experience SIRVA.

Why Shots Are Given in the Shoulder

Most vaccines are injected into muscles because the tissue contains substantial immune cells that will recognize the antigen in the vaccine and mount a response. To maintain protection, these cells need to bring the antigens to our lymph nodes—tissues throughout the body where antibodies are formed—where our immune cells mature and develop “memory.”

The deltoid muscle, the large, upside down triangular muscle near the top of your shoulder, is an ideal choice. This muscle is not only relatively easy to access (just roll up a sleeve), but it is also situated a short distance from the lymph nodes under your arms.

In most cases, SIRVA is caused by a vaccine being administered too high on the shoulder, which allows the substance to be released into the shoulder joint rather than into the muscle. The vaccine is designed to elicit an immune response, but doing so in the bursa can cause painful inflammation and tissue damage. However, if the shot is placed too low, it’s also possible to hit a nerve and cause neuropathy or numbness.

Most shoulder pain associated with shots resolves on its own over time, days or weeks. Treatments for SIRVA are the same as those for other shoulder injuries and usually aim to reduce the inflammation to your shoulder. They include:

SIRVA may also aggravate an existing shoulder injury, such as a previously damaged rotator cuff. If this happens and symptoms fail to subside, you may need surgery to treat the underlying injury.

What to Do If You Think You Have SIRVA

If your arm or shoulder pain lasts more than a few days after getting a vaccine, you should talk to your primary care provider. If physical therapy and corticosteroid injections don’t relieve the pain, you may be referred to an orthopedic surgeon who specializes in injuries like rotator cuff injuries or tendonitis. The doctor may order an ultrasound and determine a treatment plan. The ultrasound can help a physician understand the injured area’s location and extent of the damage, but can’t tell you if the cause is improper vaccine administration or another type of injury.

Luckily, many patients recover from a sore arm or shoulder after a few weeks of applying ice and taking OTC anti-inflammatory drugs. Nonetheless, if your shoulder hurts for more than a week after a vaccine and limits your ability to complete common tasks like reaching over your head, it’s time to see a doctor.

*MedShadow has chosen not to edit these comments.

I have the shoulder pain. I have had all my shots. Also, I have arthritis. It can hurt like hell. It is not going away. Treatment and cause????

I have read that SIRVA has recently been removed as one of the conditions that could be a qualifying event for compensation.

Here’s a link to the info.
https://www.federalregister.gov/documents/2021/01/21/2021-01211/national-vaccine-injury-compensation-program-revisions-to-the-vaccine-injury-table