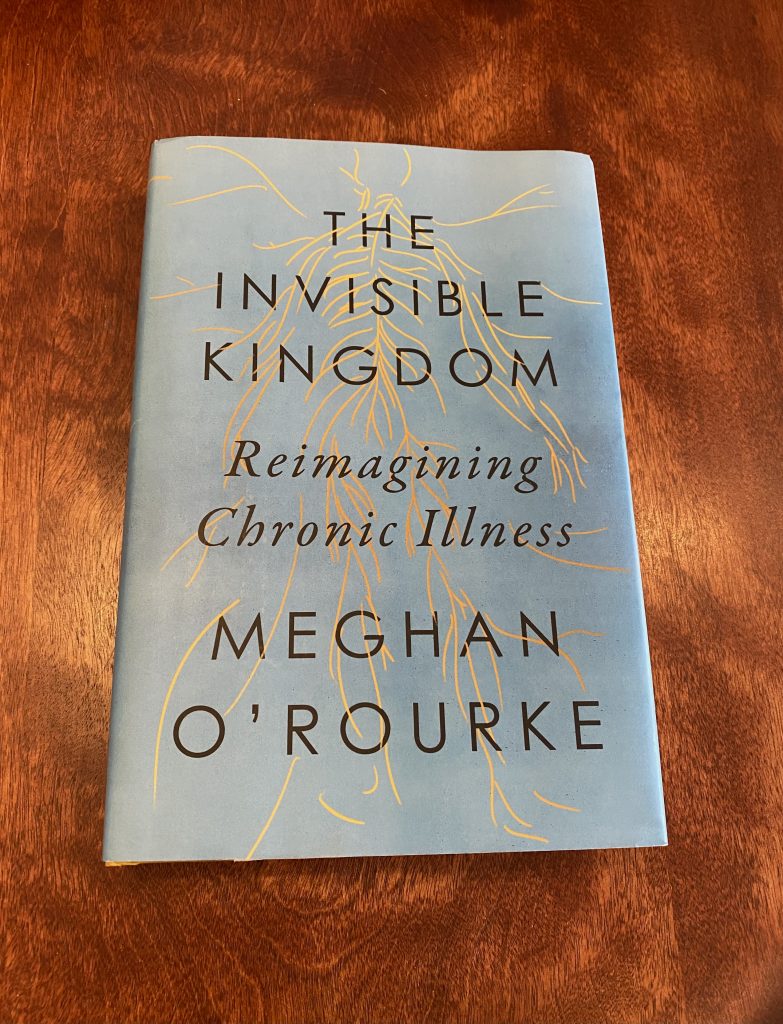 “It took years before I realized that the illness was not just my own; the silence around suffering was our society’s pathology.” – Meghan O’Rourke

Meghan O’Rourke tackles her chronic illness with the imagination of what could be possible in healthcare and medicine, and with her conversational breakdown of research and science in her New York Times’ bestselling The Invisible Kingdom. Readers will be taken with her personal story as their guide. While those with chronic disease will find power and resources in these pages, it is a story with such heartbreak and hope that it’s likely that most readers will also find it riveting.

At times, The Invisible Kingdom almost reads as memoir. O’Rourke is a gifted storyteller who writes with such a personable voice, it’s as though she is sitting across the table from you over lunch. It is also the memoir of a chronic illness itself, Lyme disease, of the scientific discoveries behind it and how it relates to symptoms and care. It also covers a history of a medical system that cannot always diagnose the illness, and the author’s ensuing medical and technical deep dives on the invisible kingdom that make up a chronic illness and those who live with one. That she tackles all this in a single book only works because of her talent as a writer. It is more than science in layperson’s terms, it is her near lifelong journey with chronic illness, and what she learned along the way.

O’Rourke spent her 30’s in a tremendous amount of pain, including a decade of visits to doctors and specialists. That’s not necessarily her starting point, and her story isn’t at all the kind that narrates how she felt pain one year and figured it out X amount of years later. Her self- discovery is bigger and wider. In chronicling her pain and the journey to treating and living with it, she advocates for a more holistic approach. Her self-deprecating humor besets the anger, but together, they kick-start her journey to figure out what is going on within her body. Western medicine, Eastern medicine, scientifically legitimate to outright dubious alternative medicine, an avalanche of appointments, her own deep dives in medical journals all lead her nowhere, until she reaches Lyme disease. It is the prescribed antibiotics O’Rourke suspects were the culprit of her pain to begin with. She finally finds a real path to healing, and that path leads to living with and managing pain, even without the ability to eradicate it.

From auto-immune syndrome to long Covid, there are numerous diseases that yield no easy diagnosis and no definitive cure. There are side effects that can be caused by one thing or another, or physical issues that come and go with an elusive consistency. Our healthcare system, from its diagnostic exams and tests to its medical practitioners, don’t handle the unknown very well. Throughout her journey, O’Rourke was made to feel crazy, unreliable or simply not to be believed. She doubted herself after a while. And yet, the author also recounts a time when the healthcare system learned from patients and believed patients’ complaints. She recalls when the patient articulating their experience was part of the diagnostic tool set. O’Rourke believes that we are ready to evolve with how we understand and live with chronic disease, and that only by coming out of the shadows, and being heard, can we truly begin to heal.

How antidepressants changed ideas about depression