Born Without 2 Legs: How Nubby The Therapy Dog Helps Others Cope 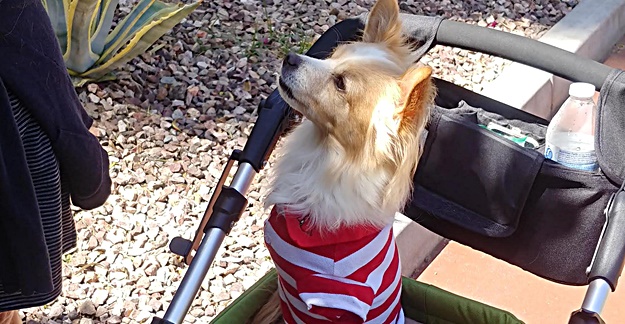 Nubby serves an important role in medical centers around Phoenix. He is a therapy dog who takes his job seriously — helping people going through health and medical issues to cope a little bit easier.

With his long, light-brown and white hair, red and white-striped polo shirt and wide smile, Nubby caught a lot of attention in the exhibit hall of last month’s Association of Health Care Journalists conference in Phoenix.

At about a foot and a half long, Nubby was also the shortest attendee there. And he was pushed around in a red baby carriage with his volunteer identification from Banner Health affixed to the front.

Is this a celebrity? Far from it. Nubby is a 7-year-old long-haired Chihuahua born without his 2 front legs. Despite this, he serves an important role in medical centers throughout the greater Phoenix area: Nubby is a therapy dog who takes his job — helping other people going through all kinds of health and medical issues cope just a little bit easier — very seriously.

While therapy animals have been getting a lot of media attention lately — and often bad publicity — they remain a critical tool in helping patients.

Nubby’s human companion, Deidre Grafel — who helped shepherd him through his therapy dog certification process — admits that Nubby gets a lot of attention wherever he goes. And she appreciates it…but not for reasons you might think.

Nubby’s lack of forearms “calls attention to his disability,” Grafel says. “But we want to call attention to it so people know not to let physical challenges challenge you.”

No one breed of dog is better than others to become a therapy dog, according to Grafel. She adds that other animals can also be certified as therapy animals, though dogs are the most common. All they need is the right training and a good handler. For Nubby, that meant a 3-month training regimen from one of several organizations that specialize in turning ordinary canines into the extraordinary.

Although Grafel has trained many therapy dogs, she explains that there’s a difference between therapy dogs, service dogs and emotional support animals.

“Service dogs perform tasks for a person and live with that person,” she explains. Such canines go through even more rigorous training and certification than therapy dogs do.

And therapy dogs provide exactly what they say: Therapy for those with whom they come in contact. They can be like Nubby, who works the medical center circuit, or live and provide comfort to just 1 patient.

Emotional support animals are in a murkier area. These are the animals that tend to get the negative media attention (such as when a woman want to bring her emotional support peacock on an aircraft recently). There aren’t really any standards for this moniker.

If you’re wondering how Grafel got into therapy dogs, she has a simple answer. “I was raised with a lot of animals. My mom was a strong animal advocate.”