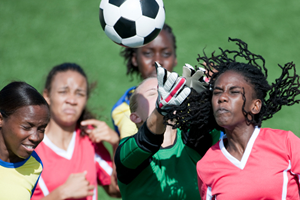 Parents of young football players as well as the professionals in the NFL all worry about the possibility of game-induced concussions but what about parents of daughters who play soccer or do gymnastics?

It’s no surprise that football is the number one sport responsible for concussions. Wrestling, basketball, hockey, and martial arts all get a lot of attention. But do you know what the number 2 sport for concussions is after football? Girls high school soccer. And number 4? Girls gymnastics.

Concussions are hard to diagnose on the field and the symptoms may not appear for a few hours. A concussion is the combination of an action and a response: If there is any type of “forceful bump, blow, or jolt to the head or body that results in rapid movement of the head” look closely for “any change in the athlete’s behavior, thinking or physical functioning” (CDC). Here is a simple chart from the Centers for Disease Control of signs the coach and parent can look for after a hard hit and symptoms that the athlete should be taught to report. Even if it seems minor at the time, every concussion is serious and should be treated that way.

If you or your child experiences a concussion, there are long-term possible effects that can be catastrophic if there is a second concussion. Here is an interview with Briana Scurry, former goalkeeper on the US Women’s Soccer team. She claims that 50% of soccer players have or will have a concussion. She is still suffering the effects of a concussion sustained in a game 3 years ago. Via WUSA9.

Post-Concussion Syndrome, via University of Pittsburgh:

Although the majority of athletes who experience a concussion are likely to recover, an unknown number of these individuals may experience chronic cognitive and neurobehavioral difficulties related to recurrent injury. Symptoms may include:

This constellation of symptoms is referred to “Post-Concussion Syndrome” and can be quite disabling for an athlete. In some cases, such difficulties can be permanent and disabling.

In addition to Post-Concussion Syndrome, suffering a second blow to the head while recovering from an initial concussion can have catastrophic consequences as in the case of “Second Impact Syndrome,” which has led to approximately 30-40 deaths over the past decade.

Do concussions lead to Altzheimers? Medical Daily says: “They found that the patients who experienced concussions had portions of their white and gray matter of the brain clustered together in areas where they should not have been. This damaged the integrity of the brain’s structure, which can lead to neurodegeneration characteristic of serious neurodegenerative disorders such as Alzheimer’s.”

What do we do to limit concussions in sports? Should there be helmets in soccer and gymnastics? How about in basketball or cheerleading? It’s difficult to change the culture from non-head gear to helmets, but recreational skiing has been very successful. Pole vaulters now wear head gear. Bicyclists are debating about helmets for on-street riding — Europe generally doesn’t require it.

Some worry that introducing head protection will allow more violence into a game or sport. Or that it will give the player a false sense of protection. Some point out that helmets aren’t designed to protect from concussions but to keep the skull intact.

“I had extra confidence, man, that extra boost of confidence.  I was ready to go.  I went out there and played so much harder,” Helmick, then 20, told Kate Snow in a 2012 interview on NBC’s Rock Center with Brian Williams.

Headbands are the most popular form of soccer headgear for those who choose to wear something on their head during play. The president of Full 90 sports, manufacturer of soccer protective headbands, is Jeff Skeen. He is concerned that the headbands don’t give the protection he intends, but claims he doesn’t have any research to go on. In an interview on NBC’s Rock Center with Brian Williams, Skeen said, “I think they’re right, there is not enough evidence. I’d like there to be more evidence,” adding, “I’m here to try to reduce injuries, not sell product.”

I think helmets make sense particularly for teens and younger children because they are less likely to be able to help assess their own head injury — a key to diagnosing a concussion. Also, a head impact on a developing brain could have longer term effects in youths, so let’s find someone who can manufacture a helmet that offers some real protection. Finally, most of these sports were designed to be non-contact. Aggressive head use interferes with the skill and beauty of the game. Head impact needs to be minimized so the sport can be played. Let the refs get tough on rough play. Let’s get the games clean again. (Although, even in clean games, accidents and concussions will happen) And for those sports like gymnastics and cheerleading where head injuries often happen out of bad training, let’s require training for coaches that includes head protection.

We need to protect ourselves and our children: several professional soccer players have started wearing head gear. Let’s join them.

Is There a Safe Amount of Drinking Over the Holidays?