Wired by Cell Phones Before Birth? 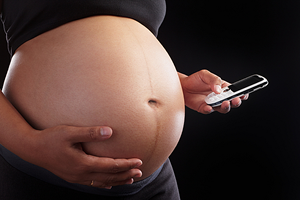 Remember the warnings not to stand in front of the microwave because the radiation could leak? Remember the scare that cell phones would give you brain cancer? Ever wonder if all those Wi-Fi waves that go through your body have any effect? After all, cell phone and Wi-Fi waves are low levels of radiation, and that can’t be good for you, can it?

New products often seem frightening when they are first introduced. But as time goes by and none of us are glowing in the dark, so to speak, fear then recedes and what seemed a scary possibility fades from our thoughts. After all, we use microwaves and cell phones every day. Cell towers run Wi-Fi through our bodies 24 hours a day; we’d know by now if there was a problem, wouldn’t we?

Maybe we wouldn’t know because there hasn’t been enough research. I don’t want to create panic, but… I’m feeling a little panicky. Grassroots Environmental Education and Environmental Health Trust are the nonprofit organizations behind The Baby Safe Project. The Project wants to warn pregnant women that the radiation from their cell phone and laptops can affect their baby even in utero. A growing fetus is more vulnerable to radiation. Through The Baby Safe Project I met Dr. Hugh Taylor, a professor of Obstetrics, Gynecology, and Reproductive Sciences and professor of Molecular, Cellular, and Developmental Biology at Yale University School of Medicine. Dr. Taylor published a small study in March 2012 on mice who were exposed in utero to cell phone radiation. When the exposed fetuses grew into adult mice, they clearly demonstrated poor memory and hyperactivity. Their brains showed altered neuronal developmental programming, which was a permanent neurological change.

Dr. Taylor’s study is only one of many, most of them small and inconclusive. The results of these early studies show that more research needs to be done on the possibility that cell phone radiation is harming people of all ages: lowering sperm count in men, doubling brain tumor risks, disturbing heart rates and magnifying ADHD symptoms.

The Baby Safe Project is focusing on the most vulnerable and least studied — fetuses. “Pregnant women deserve to know that wireless radiation can have an impact on the developing brain,” says Dr. Maya Shetreat-Klein, a pediatric neurologist practicing in New York.

The news isn’t good for small children either. Their brains absorb more radiation than adults, perhaps because the brain is developing so quickly. Their entire body is more exposed to radiation simply because their small size means that every part of the body is close to a phone in their hand.

The Baby Safe Project pamphlet states: “We call on the research community to conduct more studies to identify the mechanisms by which a fetus could be affected by wireless radiation.” (Download the pamphlet.)

The number of studies are growing, but U.S. government agencies are not yet taking any action. “Historically we have insisted on proof of harm before taking action, as with cigarettes. We sacrifice one generation for the next,” warned Devra Lee Davis, PhD MPH, founder and president of Environmental Health Trust and the Founding Director of the Center for Environmental Oncology at the University of Pittsburgh Cancer Institute.

How close the cell phone (or any wireless 2-way device) is to your body is the most important determinant in how much radiation you and your baby are exposed to. Radiation levels quickly decline with even a little separation. Simple precautions might help, and they are easy for everyone to incorporate into their daily activities whether pregnant or not:

Given that we don’t know the long-term risks to radiation exposure from cell phones, Wi-Fi or the combination of the two, it makes sense to take simple precautions. After all, it takes between 10 and 50 years for tumors to develop. A large enough group of people have not been using cell phones for long enough that a jump in tumors would be found. Each year our length of exposure to electronic radiation grows and, even more worrisome, that exposure is starting even earlier in life.

I’m still using my cell phone, but I just ordered 3 “air tube” headsets for my family and I’m going to switch off the Wi-Fi at night. Simple and easy. Why not?