6 Foods & Drinks that Can Boost or Bust Libido 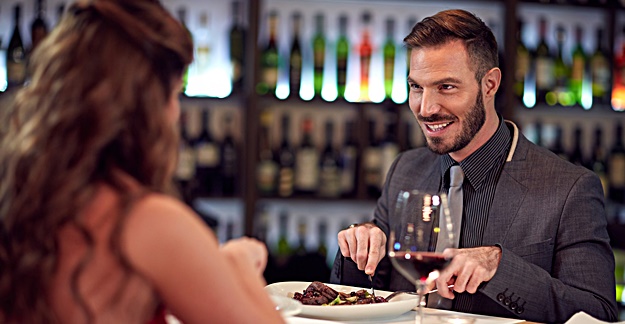 Chocolate is synonymous with Valentine’s Day, but does it help spice things up romantically? What food and drinks improve libido and which do the opposite?

On Valentine’s Day, many restaurants are packed with couples who have fallen under Cupid’s spell. A dinner date is a fitting way to celebrate the holiday, since one of its original names is St. Valentine’s Feast Day. But eat wisely: Some goodies may help to put you in the mood for grown-up fun, while others may squash it.

To be clear, there are lots of different factors that can influence one’s sex drive. “Lifestyle definitely affects libido – high stress, depression, anxiety, prescription or illicit drugs, and a lack of sleep and exercise” can all put a damper on things, according to Jim White, RDN, a registered dietitian based in Virginia Beach, Va., and a spokesman for the Academy of Nutrition and Dietetics. Weight gain and obesity can also interfere with sexual satisfaction through their effects on sex hormones and self-confidence, he says.

But if those areas are pretty well covered, certain foods and drinks may enhance or reduce your sex drive. Read on to find out which ones to reach for and which ones to steer clear of on this special day – or any time you are in the mood for love.

Dark Chocolate. If each holiday had an official food, this would be it for Valentine’s Day. All those yummy boxes of chocolate do more than please the taste buds – they might also boost pleasure in the bedroom.

“Chocolate contains phenylethylamine, a chemical that gives you that ‘love’ feeling,” White explains. It has also been found to decrease blood pressure. High blood pressure can damage blood vessels and reduce blood flow – including below the belt. That can make it tougher for men to keep or maintain an erection, and it can diminish sexual stimulation in women.

In a study from the Journal of Sexual Medicine, women who ate chocolate daily had higher levels of sexual desire than women who ate it less often. White recommends a daily ounce of dark chocolate with at least 70% cocoa.

Pomegranate. This juicy fruit has been a symbol of fertility throughout history. Research reported in 2012 in the journal Endocrine Abstracts found that drinking pomegranate juice daily for 2 weeks led to improvements in blood pressure – and thus circulation to, ahem, those key areas – and increased testosterone in both men and women by approximately 24%. Though people typically associate testosterone with men, the hormone also affects the sexual functioning of women.

The study also found that the fruit led to improved mood and lower anxiety among participants – which may further help in the bedroom, since a bad mood and high anxiety can be sure libido killers. White suggests drinking a glass of pomegranate juice daily or adding a half-cup of the seeds to salads, smoothies or overnight oats.

Want to spice things up in the bedroom this Valentine’s Day? Try dark chocolate, pomegranate or garlic.

Garlic. Though garlic might repel vampires, it seems to have the opposite effect on lovers. Same goes for onions, which belong to the same genus as garlic. White says that these pungent plants can increase sperm production in men and raise levels of sex hormones.

Garlic can improve blood flow in men and women by reducing blood pressure and preventing plaque buildup in the arteries, according to experts at the University of Maryland Medical Center, and it may also help boost bedroom activity in a different way, suggest findings from a 2016 study from the journal Appetite.

The results show that women rated the body odor of men who ate garlic as more pleasant and attractive than the body odor of no-garlic guys . Try a clove of garlic or a cup of onions in a stir-fry or salad.

Soy. Though soy is a good source of plant-based protein that is often a go-to for vegans and vegetarians in particular, it can increase estrogen levels, and an excess of soy can lead to lower testosterone, says White. In research described in the Journal of European Nutrition, men who ate baked goods with soy 3 times a day for 6 weeks had lower testosterone than men who stuck with their regular diet.

Watch out for protein bars! Aside from more well-known sources like soy milk, tofu and soybeans, the ingredient is also found in lots of other products. “Soy is often used as a cheap filler in products such as protein bars,” notes White, and it is also a surprising addition to a wide range of products, from canned tuna to frozen desserts. Be sure to check food labels to avoid inadvertently taking in too much soy.

Lasagna. Though you might be tempted to dig into a rich dish with your valentine, you may want to think twice about that if you’re hoping for some after-dinner loving. There’s a very straightforward reason for the mood-busting effect of processed, carb-heavy dishes like pasta and white-rice based meals: They present a large load for the body to digest, explains White. These types of foods can make people “lethargic and sleepy – and can be a dagger in the bedroom.”

Other processed, simple-carbs products like soda, candy and other sweets “can raise blood sugar and damage human cells,” he adds, and high-fat, fried foods like calamari, french fries and chicken fingers can decrease testosterone and libido. Stick to the balance of healthy protein and complex carbs like veggies and whole grains for best romantic results.

Alcohol. Though it might make you less sexually inhibited, too much alcohol can defeat the purpose. “When your body is processing alcohol, you just don’t get the blood flow that you normally would,” White says. A study revealed that 72% of men with alcohol dependence had “one or more sexual dysfunction, the most common being premature ejaculation, low sexual desire and erectile dysfunction,” the authors wrote. “The amount of alcohol consumed appeared to be the most significant predictor of developing sexual dysfunction.”

The Dietary Guidelines for Americans advises that women should limit their intake to one drink per day – like a 12-ounce beer or 5-ounce glass of wine, for example, and men should have no more than 2 each day. For extra caution, just stay off the sauce for the night.

Here’s hoping your Valentine’s Day is full of love and happiness. Now you know what (or what not) to eat or drink to make sure it’s your best one yet.