A Thoughtful Self-Portrait of Life as a Brain Surgeon 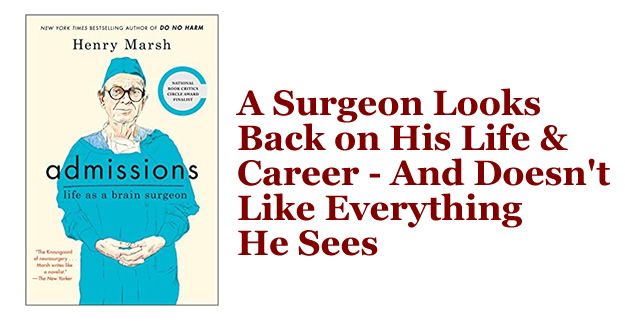 Admissions is an honest memoir that gracefully weaves through Henry Marsh’s myriad experiences as a neurosurgeon, son and inhabitant of this planet.

The book begins with Marsh — who is on the cusp of retirement — inspecting an isolated cabin in Oxford, England, where he plans on setting up a woodworking shop to distract his soon-to-be idle hands. An apt starting point, Marsh uses the scene as a launching pad to take the reader through the most prominent and vital stages of his career.

The subsequent chapters transport you around the world, to places like Nepal, London, Houston and Ukraine. Along the way, Marsh blends artful and charismatic storytelling with an honest recount of his experiences to deliver genuine, worthwhile nuggets of wisdom that anyone can learn from — especially the under-40 crowd.

A Raw but Compassionate Look at Life

The level of emotional awareness that Marsh brings to the table is almost startling. He is raw. He is compassionate, yet blunt. Perhaps the most emotional part of the book is when Marsh plainly states “I was not a good son” when reflecting on his father, who had dementia in his later years.

Marsh’s admittance and self-discovery of his selfish, narcissistic ways (in his opinion) were enough to cause this admittedly teary-eyed reviewer to reflect on his own behavior — the mark of a thoughtful read.

If you’re looking for a thriller or a leisurely summer distraction, turn elsewhere — Admissions is not that. The ideas and lessons that Marsh has accumulated throughout his rich, storied life, however, are worth the time and brain power required to absorb and reflect. And you may want to invest a little of each — after all, as Marsh points out, we’re all running out of both.

This Thriller That Calls Out Pharma and FDA Is a Chiller