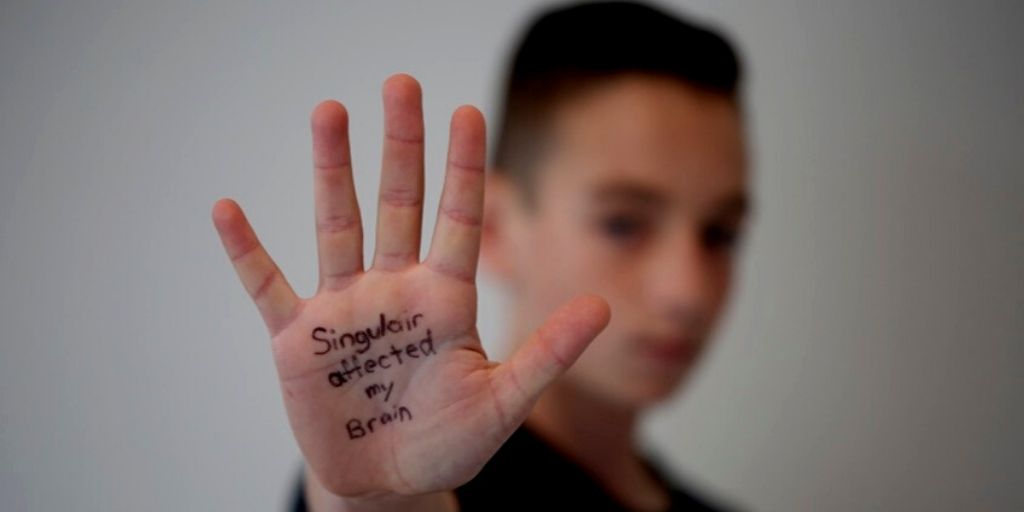 We are all aware that medications have side effects. We hear the long list rattled off at the end of every commercial and we read the paragraphs filling the pages of the package inserts.  Despite the warnings, we mostly choose to take the medication in a desperate attempt to cure what ails us. After all, since most side effects are so “rare,” what are the odds it will happen to us?  And if it does, we can simply stop the medication and reverse all the negative effects, right? Oh, what I would give to go back and change my perception of side effects. After watching my 11-year-old son suffer unimaginable drug-induced effects – that did not stop when we stopped his medication – I clawed my way up a mountain in search of answers. Exhausted and bruised, I am now standing at the top shouting our story in hopes it will help others not have to endure the same torturous climb.

Nicholas’ doctor recommended a commonly prescribed medication called Singulair (montelukast) to manage his uncontrolled asthma.  It improved his asthma symptoms so significantly we referred to it as “the magic pill.” But after several months, Nicholas started to experience mild bouts of unexplained sadness. Since this was out of character for Nicholas, I did a little digging and discovered that “depression” is a recognized side effect of Singulair.  Relieved the solution was so simple, we stopped the drug. Little did I know our world was about to be turned upside down.

To our horror, I watched helplessly as my son suddenly and dramatically transformed into a lifeless shell suffering from depression, anxiety, panic attacks, paranoia, insomnia, nightmares, and — perhaps the most terrifying — hallucinations, both auditory and visual. Knowing these words are incapable of describing the true horror we witnessed for 120 long days, we created this video documenting Nicholas’ experience.

Change the Ending from PRODUCTIONS By Passadino on Vimeo.

Desperate for help, we went to doctor after doctor, each rejecting the idea that stopping Singulair could have caused Nicholas’ sudden onset of severe, debilitating neuropsychiatric symptoms. We learned that this type of reaction typically only occurs with the abrupt discontinuation of centrally acting medications, like antidepressants or benzodiazepines. It is often referred to as a “withdrawal syndrome” and can last for weeks, months, or years as the brain recalibrates. Understandably, these doctors did not believe that Singulair could induce this same type of central nervous system effect since its drug labeling (prescribing directions for doctors) clearly indicates that Singulair has only “minimal distribution across the blood-brain barrier” and that it only inhibits “airway” receptors.

Determined to understand how an asthma/allergy medication acting only on the respiratory system could have such severe, potentially irreversible effects on the brain, I connected with doctors, researchers, drug safety advocates and thousands of other affected individuals. Together we found many studies evaluating the effects of montelukast on the brain for the objective of restoring brain health relating to Alzheimer’s disease, brain injury, cranial irradiation effects and more.

The findings of these studies revealed that a substantial amount of Singulair reaches the brain, causing structural and functional effects. The effects can be either positive or negative and are mediated through a completely different receptor action from the one Singulair has always been known to inhibit. Interestingly, this ‘new’ receptor, GPR17, is recognized as a regulator of cells with evidence linking their disruption across most psychiatric conditions.

It seemed the FDA was hearing our fears about the harms that Singulair was causing. The FDA called a Pediatric-focused Safety Review meeting of both the Pediatric and Drug Safety and Risk Management Advisory Committees to review the safety signal for neuropsychiatric adverse events raised by patient advocacy groups. I was thrilled to see the FDA’s  Briefing Document included references to the above-mentioned studies about the effects on the brain.

-No longer would the reports of neuropsychiatric side effects be dismissed as “anecdotal.”

-No longer would the potential mechanism for these symptoms be unknown.

-No longer would Singulair be known as a medication that acts only on the airways like it’s been marketed and prescribed to millions of asthma/allergy patients for over 20 years.

-No longer would it be expected that all symptoms would immediately disappear when the medication is stopped, but rather understand effects to the brain take time to reverse.

-And no longer would I have to stand with countless others to fight so hard to spread awareness about its direct action on the brain. Or so I thought.

Distressingly, this important information was not the focus of the FDA meeting. Their presentation completely missed the real issue and was limited to quantifying a prevalence rate for the reported neuropsychiatric side effects. How does the number that has been affected impact the FDA’s duty to convey new scientific information that emerges after a drug is released to the market? How will the medical community become aware of the possible mechanism underlying the neuropsychiatric symptoms experienced both during and after treatment? These were the questions echoed by the consumers and multiple public interest groups during the meeting.

Devastated by the FDA’s decision not to shine a spotlight on this science, I created a Change.org petition to encourage them to take urgent action to directly convey the evidence-based science about Singulair’s direct action on the brain. The petition is not only applicable to asthma/allergy patients but also to anyone that wants access to current, accurate information about their prescription medications. Given the stakes, is that too much to ask?

Nicholas was one of the “lucky” ones to recover from these horrific drug-induced effects and able to manage his asthma symptoms without this medication.  Sadly, we know this is not always the case for so many others that continue to suffer long after they stop using Singulair. Although we are grateful for his recovery, the memory of Nicholas suffering from the debilitating psychiatric side effects is seared into our minds forever.  We cannot go back to change the beginning of our story but we can change the ending by helping others.

As a member of the FDA’s Drug Safety and Risk Management Advisory Committee, I sat on the FDA panel on Singulair that Laura describes. The Pediatric Advisory Committee also attended. I support Laura’s work, she is right. In the meeting, I called for stronger wording and clearer information on the label of Singulair. Several Committee members noted that the information on neuropsychiatric risks is on the label. That is true, but they are buried at the bottom in the Warnings section and the phrase, neuropsychiatric, is vague. In the Committee meeting, I spoke about the need for a black box warning on the label that explicitly outlines the neuropsychiatric risks.

Many Committee members were surprised to find that Singulair was being prescribed to children for minor problems like coughs and rhinitis. Singulair is not considered a “first-line” medicine, but one used after other drugs have failed. It’s far too strong to use for minor ailments or if another medication is an option. The labeling about Singulair being a secondary or third choice should be clear on the label.  The Committees were not asked to vote on what action the FDA should take, we were simply asked to comment and suggest. The Committees are advisory only, we cannot compel the FDA to any action. To my knowledge, the FDA has not changed the label or required better education for pediatricians about Singulair including the evidence from animal studies suggesting Singulair could act directly on cells in the brain. Find FDA study review by searching in a browser: FDA Singulair Briefing Document and review page 14, Section 1.4.4. That Singulair does cross the blood-brain barrier was clear to the Advisory Committees.

Thank you Laura and all who are working so hard to get doctors accurate and full information. Parents have the right to the information they need to protect the health and lives of their children.