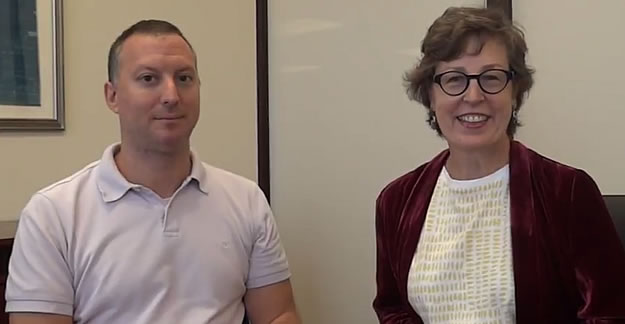 In this episode, Su and Jonathan discuss one of the downsides of the school year: lice. Few kids make it all the way through a school career without finding themselves scratching. What’s a parent to do? We have advice:

Su Robotti: Hi, I’m Su Robotti and this is MedShadow TV. I’m the founder of MedShadow Foundation and our content manager is Jonathan Block. Today, we’re going to talk to about—well I’m sorry, but we’re going to talk about lice, head lice. It’s an ugly topic, but let’s just start with what people keep reassuring each other. It does not mean you have a dirty home. It just means that you or your child shared a hat or a helmet or touched foreheads with somebody who happens to have lice. And you can get rid of them easily.

Lice are not dangerous, they do not carry disease. So Jonathan, what do we need people to know about lice?

Jonathan Block: Well, first thing is that they are a number of different treatments for lice. It runs the gamut from some natural treatments to some over-the-counter treatments, even some herbal treatments. I’m going to start with the over-the-counter treatments that many people may have heard of. It’s called Rid or Nix, they both have the same active ingredient, what’s called permethrin. It’s actually been found to be quite effective, it’s been on the market for decades, and there are a very few side effects associated with the Rid and Nix products.

SR: Let me just say, there have been, as far as we can tell, no long-term studies on the safety of Rid or Nix, but the American Academy of Pediatrics has determined that it’s been on the market long enough that theoretically we would have seen it, so they consider it safe. And they suggest it as a first line, the first line of defense, the first line of offense, the first thing you use. However, that may not be the best idea, why would that be?

JB: Correct. Obviously, you’re going to be using a drug product. And some people have also taken a look at using some more natural remedies for it. some of these include essential oils. However, there is a word of caution: If you’re going to try essential oils, they can sometimes cause skin rashes, depending, some people have allergies to them, so you have to be looking out for them. There’s a thought that there are several common treatments such as Vaseline, also known as petroleum jelly, olive oil and even mayonnaise. Yes, it’s not just meant for your sandwiches. However, much of the research has found that Vaseline, olive oil and mayonnaise are rather ineffective. Even though of you were to use it, the lice may appear dead after using one of these treatments, the fact of the matter is they aren’t actually dead. They’re just kind of inactive for a short period of time and then they come back to life in a term known as the resurrection effect.

SR: I love the resurrection effect. One of the reasons why we don’t encourage everybody to use Rid or Nix all the time even though it’s pretty effective and the AAP says it’s fine to do is because lice are developing resistance to it. The effectiveness of Rid and Nix, the ingredients in it, used to be in the mid-90s. It’s now down to probably mid-70s, and it’s basically because when people use it, sometimes they don’t use it exactly correctly, so that all the lice get killed which kind of selects the lice that have a natural resistance to the drug, to the medicine. They’re going to survive and breathe, and that’s how you get a resistance.

So it’s best to mix things up at least through our society, and use different types of medicines or methods. The other thing to keep in mind is that if you do use a Rid or a Nix or the other drugs that are considered safe and approved for lice removal which would include ivermectin, which is sold as Sklice and also spinosad, there are a few others your doctor can recommend. If you use them once, and they aren’t effective, don’t use them the second time. It’s going to help select the lice that will survive and create resistance. Move to a different type of drug. Or, just comb your hair out. Every person that I spoke with, every mother who’s in the school system now, says that they don’t use any kind of medicines on it. They use Pantene as a white conditioner, and comb the nits and the lice out, it’s painstaking and slow. It might take a half an hour, it might take an hour depending on the length of your child’s hair. There are other companies that are available to use. Which one do you like?

JB: Yeah, so there’s a few of them. The most interesting one goes under the name of Hair Fairies, and there’s a couple of other ones called Lice Enders and Lice Busters. These are companies that have their own proprietary products that they claim are effective for removing lice.

So, if you’re children come home with lice, if you find you get lice from sharing helmets or hats or from whatever reason, you have many, many options. Most of them are safe, but remember to mix it up. Don’t use the same products multiple times in a row. Anything else?

JB: Nope, I think you did a great job.

SR: Welcome back to school and life. Bye.