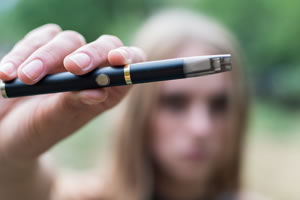 On the train from Trenton to Philadelphia, I glanced out of the window and saw a white neon sign above a store selling e-cigarettes and other smokeless tobacco products.  The sign above the store lit up the sky, saying: “Vaping Save Lives.”

The FDA would probably acknowledge that these new nicotine delivery systems pose less harm than traditional combustible cigarettes in some respects: E-cigarette users don’t inhale the tars and toxic chemicals from burning tobacco, and smokeless tobacco may present less risk of lung cancer and respiratory disease. Manufacturers also contend that these products are helpful for people trying to quit smoking traditional cigarettes.

But the FDA and many health professionals would not be happy to see a sign claiming any health benefits, particularly one that boasts that these products “save lives.”  These marketing tactics overstep evidence of harmful side effects and mislead people into thinking that nicotine is “safe.”

Take Swedish snus (pronounced ‘snoose’ or ‘snooze’), a moist smokeless tobacco that users place underneath the upper lip. (It is sometimes used loosely as well.) In June 2014, the Stockholm-based company Swedish Match AB submitted a Modified Risk Tobacco Product (MRTP) application to the FDA for 10 of its General snus sub-brands.

The company proposed that the FDA change the warning label from: “WARNING: This product is not a safe alternative to cigarettes” to “WARNING: No tobacco product is safe, but this product presents substantially lower risks to health than cigarettes.”

In April 2015, the 8-member Tobacco Products Scientific Advisory Committee (TPSAC) panel concluded that “the applications do not provide adequate data to support a lack of association for use of these products with the other disease endpoints explored (i.e., esophageal, stomach, and pancreatic cancers, CVD, stroke, and all-cause mortality).” The panel members voted unanimously not to change the warning on snus products because the company’s proposed language does not adequately describe the health risks, including cancer, heart disease, gum diseases, tooth loss and pregnancy complications such as early delivery and stillbirth. The products also deliver nicotine — an addictive drug.

In addition, the committee felt that the company’s proposed language oversimplifies the risk, since some snus users also smoke, exposing themselves to negative health effects from both combustible and smokeless products.

The FDA is due to issue its final decision on the Swedish snus modified risk application by August 2015. The agency is not obligated to follow the committee’s decision, but it usually does. In the meantime, Swedish Match cannot alter the current warning label or market its products as a safer nicotine alternative to traditional cigarettes.

But US consumers can still buy snus in shops and from internet snus stores. American tobacco companies, like Altria and R.J. Reynolds, have also promoted smokeless tobacco products (Skoal and Copenhagen) like snus. According to Snus Central.org, 50 million cans of snus are sold in the US each year.

Growing E-Cigarette Use Among Teens Adds to Concern

Health professionals and regulators are alarmed by the increasing use of e-cigarettes, especially among teens. The FDA has been debating the pros and cons of e-cigarette use as a smoking cessation aid, as well as investigating the quality and safety of materials and ingredients used in the device, as MedShadow has reported in several articles and news items.

Acting FDA head Dr. Stephen Ostroff said strengthening tobacco regulations is one of his top priorities, citing new data from the National Youth Tobacco Survey that showed the use of e-cigarettes among middle and high school students has tripled in the last year. Dr. Ostroff, who briefly attended the FDA panel meeting, told The Hill‘s Sarah Ferris that the agency is moving “full speed ahead” with its efforts to crack down on the use of e-cigarettes.

The FDA considered regulating e-cigarettes in 2011 before formally proposing rules in April 2014, under which the FDA would prohibit e-cigarettes from being sold to children under the age of 18. But the proposal does not specifically address e-cigarette marketing and advertisements that health advocates say appeal to children.

According to The Hill, the FDA received more than 135,000 comments on the proposed regulations rule, which Ostroff said “has been a challenge of the first order.”

David A. Kessler, FDA commissioner from 1990 to 1997, and Matthew L. Myers, president of the Campaign for Tobacco-Free Kids, appealed for swift action and stringent regulation of e-cigarette marketing. In It’s Time to Regulate E-Cigarettes, an Op-Ed published on April 23, 2015 in The New York Times, they said: “In 2011, the FDA announced its intention to impose rules on e-cigarettes as a tobacco product. The FDA. finally issued proposed rules in April 2014. But those rules still have not been finalized, and the administration has not committed to a firm date to take action. During that time, e-cigarette proponents lobbied heavily — and successfully — against restrictions on marketing or use of flavors. We cannot afford to waste more time while the tobacco industry addicts another generation of kids.”

On the same day The New York Times editorial board pushed for regulation beyond a nationwide ban on sales to children under 18, penalties for sales to minors and transparency about the ingredients in e-cigarettes: “Those are a good start but the agency should go further and ban flavors and packaging designed to appeal to youngsters and restrict television marketing on shows watched by young people.”

The agency may also want to dim the lights on the neon sign near Trenton that promises “Vaping Saves Lives.”

For Generation Juul, Nicotine Addiction Happens Fast And Is Hard To Shake